Who might the Atlanta Hawks target in the 2013 NBA Draft? If NBA.com's Scott Howard-Cooper is right he has the Hawks going really big with their two first round selections.

NBA.com's Scott Howard-Cooper has updated his latest mock draft and has the Atlanta Hawks going for a pair of center prospects with the No. 17 and 18 picks in the 2013 NBA Draft. Howard-Cooper projects Duke's Mason Plumlee to Atlanta with the 17th pick and 7-1 prospect Rudy Gobert at 18.

We have discussed Plumlee at length on a number of occasions but he is a name that remains to be in the mix for the late lottery to mid first round. 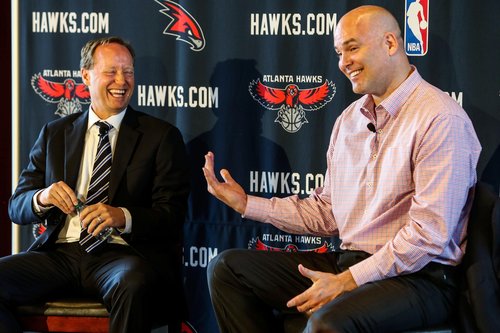 One of the bigger unknowns in the draft, Greek 18 year old Giannis Antetokounmpo has been linked to the Atlanta Hawks -- but will he even be there when they pick at #17 -- and who is this guy, anyway?

The combination of a developing offensive game and already-there elite athleticism for a big man has put the brother of Pacers rookie Miles Plumlee into a very good spot. He could go as high as late-lottery, in that Philadelphia-Oklahoma City range.

Plumlee is not my first choice for the 17th pick but as far as the center prospects go he is definitely in the conversation. Also in that conversation is 7-2 center Rudy Gobert of France whose length is intriguing to many teams.

Gobert had an underwhelming 2012-13 in France, but front offices see real defensive potential with the size and wingspan. They were also impressed he participated in the Chicago pre-draft combine when a lot of others with a chance for mid-first would have bailed. But not being in great shape for the early individual workouts could hurt.

Gobert is still very much a project and might be better suited to remain overseas for another season to further his development. However, he's the type of guy that could also get some seasoning in the D-League should a team like the Hawks take him but not have a lot of minutes available for him.

Here is a look at Gobert's DraftExpress scouting report: