2013 NBA Mock Draft: DraftExpress projects the Hawks to go big in the first round

Who does DraftExpress think that the Atlanta Hawks will select in the 2013 NBA Draft?

Share All sharing options for: 2013 NBA Mock Draft: DraftExpress projects the Hawks to go big in the first round

With a number of big man options forecasted in the mid to late first round, the Atlanta Hawks have been routinely linked to at least one center prospect in most Mock Drafts. In DraftExpress' latest update they project the Hawks to go with a pair of big men in Gonzaga forward/center Kelly Olynyk and Duke center Mason Plumlee. 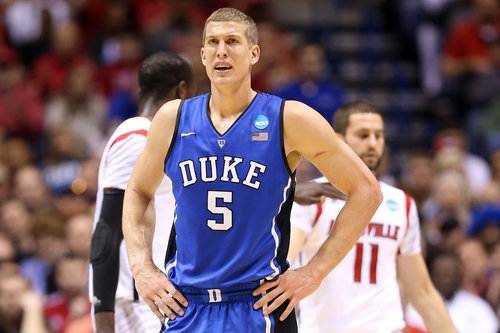 Many mock drafts have linked Duke center Mason Plumlee to the Atlanta Hawks. Here we take a closer look at Plumlee and see a much different player than Louisville's Gorgui Dieng.

We have discussed Plumlee at length but Olynyk is a new name. In the early mocks he was projected to be gone by the time the Hawks were on the board at No. 17. As we get closer to the draft it looks like Olynyk may be sliding down some draft boards.

One reason for that is that Olynyk has spent many of his workouts showcasing his ball handling skills and shooting touch rather than working on traditional center drills. Olynyk measured out as a seven footer at the Draft Combine but many have him cast as a stretch four in the NBA. As gifted as he is on offense it is the questions regarding his defense that likely have him slipping in some mocks.

Its worth pointing out that there is a growing opinion that the Hawks are also looking to go with a European player that wouldn't look to be in the NBA next season in an effort to clear more cap room rather than be tied to a pair of first round picks. If Atlanta doesn't go that route then going with a pair of bigs is also a possibility.

Interestingly, DraftExpress has Rudy Gobert going 19th to the Cavaliers and Gorgui Dieng to the Chicago Bulls at No. 20.