Jeff Teague, on the verge of restricted free agency, has played poorly over the first five games of the Hawks first round series against the Indiana Pacers. If the Hawks are to pull-off an upset in the final two games of the series, Teague will have to return to form.

As Larry Drew has told us numerous times this season, Jeff Teague is the catalyst for the Hawks success due to his ability to turn the opposition over, push the ball on the fast-break, and run the Hawks offense with pace. When he plays with aggression and pace, Teague plays like a top-10 point guard in the NBA. The problem is Teague's lack of a consistent effort. Jeff can disappear for large portions of games, as he has done all too often in this first round series.

Teague is shooting a miserable 34.8% (24-of-69) from the field in the first five games (36.2 eFG%), which is the worst on the team aside from Dahntay Jones, who has gone 1-of-4. Jeff is averaging just 14 points and 5.6 assists per game with an offensive rating of 93, and, most discouraging, is that only 21 of his 69 shots (30.4%) have come inside the restricted area (39.1% of Teague's regular season shot attempts came from the restricted area). Teague has been content to play on the outside, and has not attacked the paint with enough aggression coming off of pick-and-rolls. Even when he is getting in the paint, Teague is struggling to finish as he has gone just 10-for-21 (47.6%) inside the restricted area (Teague shot 55.9% from the restricted area in the regular season, around the league average). 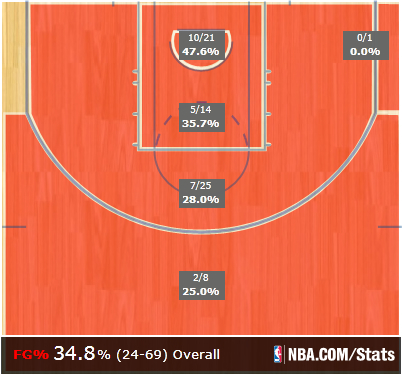 The difficulty to finish inside has no doubt been effected by the Pacers' length on the inside, mainly Roy Hibbert. However, Teague has to be more committed to attacking the paint, if for nothing else than to draw fouls. Teague is shooting 83.3% (20-of-24) from the free throw line in the series, which is by far the best among Hawks with 10 or more free throws (Devin Harris and Al Horford are each shooting 65.2% and Josh Smith is shooting 46.9%). Not only would Teague getting to the line more than 4.8 times per game be beneficial for the Hawks offense, but it would also do a better job putting the Pacers big men into foul trouble. In Game 5, Roy Hibbert and David West didn't pick up their first defensive fouls until the second half. The Hawks were successful in their two home wins in getting the Pacers' bigs into foul trouble, and taking advantage of the Indiana bench. A more aggressive Jeff Teague would apply more pressure on the Pacers' bigs to stay out of foul trouble.

Teague's defense has been as bad as his offense. He has a defensive rating of 109 through five games, and has collected just seven steals. He has been sloppy defending pick-and-rolls and has lazily helped off of George Hill at times. Hill took advantage of Teague abandoning him in the perimeter in the first two games, hitting 7-of-11 three point attempts. Hill has gone cold since, but still has an eFG% of 50.9 and an offensive rating of 117 heading into Game 6. Teague's continued struggles with defending on the perimeter are a severe concern for the Hawks. He continues to have problems fighting through screens and has all too often been caught in no-man's land when helping down on the post.

Jeff Teague is too much of a key player for the Hawks to move on to the second round with him playing as poorly as he has. Teague is the one player that has the ability to consistently create shot opportunities for himself and others when he is aggressive, and that is something the Hawks desperately need at times, especially when Horford is struggling to hit his jump-shot and Smith is in foul trouble (see: Game 5). Teague has to find some kind of inspiration prior to Game 6 (maybe that he's about to be an RFA? or that it's the PLAYOFFS JEFF?!) if the Hawks are going to force a Game 7. Let's hope that we get the aggressive Jeff Teague that two years ago in Chicago earned the nickname "Playoff Teague."