How the Hawks lost Game 5....in the second quarter

The box score shows the Hawks were still in the game into the fourth quarter, but the game was lost in the second quarter when Josh Smith picked up his second foul and left the game -- physically and spiritually.

Share All sharing options for: How the Hawks lost Game 5....in the second quarter

On a night where Josh Smith, not Al Horford, was the best player on the floor for the Atlanta Hawks, Smith got The Horford Treatment (TM: Bret LaGree/Hoopinion) upon receiving his second foul of the first half, a capital offense that cost Smith the rest of half, his own personal mojo and the Hawks any chance of taking Game 5 in Indiana Wednesday night.

When Smith reached and fouled David West, there was 6:49 left in the second quarter and the Hawks held a one point lead.

Smith had been charging the Hawks with some high energy, getting four steals to that point and scoring 11 points. The Pacers were making the Hawks big men earn their buckets, with Smith making four of 11 shots to that point, but Smith's willingness to battle in the post and havoc created on the defensive end had given the Hawks the lead and brought the Hawks faithful to envision the possibility of stealing home court advantage.

Almost as soon as Smith left the game, the lead left the Hawks, never again to return as the Pacers ended the half with a 20-11 flourish, a prelude to a typically jump-shooty, noncompetitive Hawks road playoff effort in the second half.

After the Hawks had forced the Pacers into 10 turnovers with Smith on the floor, Indiana didn't turn it over a single time with Smith riding the Hawks bench for the remainder of the half.

The game was never the same, and while Larry Drew amazingly left Smith in the game in the third quarter after acquiring his third, fourth and fifth fouls, they were all acquired while the Pacers enjoyed a double-digit lead and had calcified their already stingy defense inside against the Hawks.

Given, Josh Smith had played every single minute to the point of getting that second foul and was probably due rest, but not six minutes worth. The time to be bold was when the game was still very much in question, not in desperation.

Look around the league at this time of the season and you'll see even geriatrics like Paul Pierce logging 45 minutes -- playing a player like Smith or Horford 46 minutes in a game shouldn't even be worth a second thought.

The Hawks aren't going to win a road game in the playoffs without going all-in long before the desperation point of a contest. They certainly won't win by jump shooting their way past the Pacers, as yet another chapter in the book of "Can't beat a physical team by backing away and firing long two-point shots" illustrates.

The Hawks disintegrated into technical foul and complaint syndrome, the basic give-up mode of offense and all the usual characteristics that accompany this team's big game losses -- complete with a guady score deficit when the final buzzer sounds.

It didn't have to go down that way. The Hawks sat Josh Smith at what turned out to be THE critical point in the game and, in turn, sat their chances of winning Game 5 and a chance to win this series in Atlanta Friday night.

The Pacers played physical, aggressive, playoff basketball. A Jason Terry Memorial Tip 'O the Cap to a Pacer front line that shot 21-31 and made it clear it would not be easy for the Hawks to Big Lineup their way to an upset. Very quite the opposite.

Leading the way was the fantastic play of David West, who was 11-16 against anything the Hawks ran at him defensively. West always looks the part of the Angry Big Man and he played like it in Game 5, setting the tone for the Pacers on both ends.

The Hawks, amazingly, made 30-37 free throws as the Pacers enforced a make-them-earn-it philosophy all night. The 30 FTM were a season high, besting by five the number in Game 4. These two games represent two of the top four FT efforts all season. Playoff basketball!

Jeff Teague had a rough game, as he made only three of 16 shots, including a 3/7 clip at the rim. Teague tried to attack but was met with a fortified inside presence of the Pacers and found the road extremely bumpy. Despite the struggles, Teague still enjoyed a 5:1 assist to turnover ratio.

Teague wasn't alone in his struggles to score near the rim, as the Hawks as a team shot 52 percent at the rim, per NBA.com/Stats, below the league average. 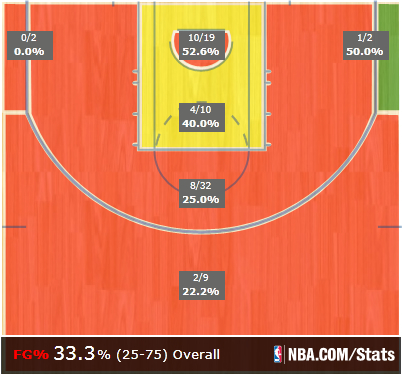