The Knicks got a 95-82 victory over the Hawks as Carmelo Anthony backed up his 50 point game in Miami with a 40 point performance in Atlanta Wednesday night.

The Hawks jumped out to an early 10-2 lead behind some early three point baskets from Kyle Korver and DeShawn Stevenson, but then Carmelo Anthony happened. Anthony had dropped 13 in the first quarter on 5-of-8 shooting to help the Knicks take a 23-18 lead after the first. Anthony added 11 more in the second quarter as the Knicks took a 47-40 lead into the half. The Hawks tried different matchups on Carmelo, putting DeShawn Stevenson, Dahntay Jones, and Josh Smith on him, but no one was able to slow him down as he stayed hot after a 50 point game in Miami. Anthony finished the night with 40 points on 17-of-27 shooting, scoring 36 in the first three quarters.

The Hawks came back strong in the third quarter and were able to tie the game 68-68 heading into the fourth. THe Hawks offense was carried by Kyle Korver who led the team with 25 points, all coming in the first three quarters. Korver was 6-of-10 from the three point line, and took advantage of the open space that was available to him from the Knicks' switching and aggressive double teams. Jeff Teague added 15 points and nine assists, but struggled defensively down the stretch.

The Knicks dominated the fourth quarter, outscoring the Hawks 27-14 and were led by Raymond Felton and JR Smith who had 10 points a piece in the fourth. With the Knicks up 78-72 with 8:17 to play, Larry Drew subbed Jeff Teague in for Shelvin Mack. The Knicks immediately got six points on three consecutive Felton layups that were given up due to poor pick-and-roll defensive execution. Drew called timeout and got into a heated exchange with Teague about the defensive lapses.

"I got a little upset. Me and Jeff did have an exchange of words, but it was an isolated incident," said Drew. "Emotions were high at the time, but Jeff knows I'm going to ride him. I depend on him. At that particular time, I didn't feel that we defended [pick-and-rolls] the right way. I didn't think Jeff played it the way we had gone over how we were going to play pick-and-roll. It goes hand-in-hand, the big guy has to make the call and [Jeff] has to do his job on the screen, I didn't feel he did his job and so I told him that."

"I think our coverages were bad," said Teague. "We need to sharpen up our pick-and-roll coverage. A lot on my part. I thought I should've backed up a little bit on Felton and let him shoot a contested shot. But I got up a little bit and he used his speed to get by me."

The group of Jeff Teague, Josh Smith, and Al Horford had a miserable game. Josh Smith was awful, plain and simple. He shot 5-of-13 from the field for 10 points along with eight boards and five assists. Smith's shot selection was horrid and he had some bad lapses defending Melo, especially in the first half. Horford was taken out of his game early and never became a factor going 4-of-10 from the field for nine points, seven rebounds, and five assists. The three combined to shoot 42.4% from the field and their inability to find any offensive rhythm cost the Hawks dearly down the stretch once the Knicks decided to not leave Korver open. Here is their combined shot chart. 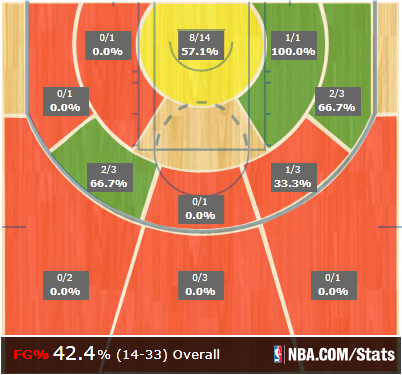 Not good. The Hawks will be back in action Friday to wrap up this four-game home-stand against the Sixers. Philadelphia has struggled this year, but if the Hawks don't clean up their pick-and-roll defense Jrue Holiday could prove to be a big problem. With the loss, the Hawks fell to two games back of Brooklyn for the four-seed and are just a half game up on Chicago for the sixth seed with six games to play in the regular season.