The Hawks went with their big lineup for Game 3 and dominated the Pacers 90-69 to earn their first victory of the series. Al Horford led the way for Atlanta with 26 points and 16 rebounds.

Share All sharing options for: Big Lineup. Big Payoff. The Hawks steamroll the Pacers in Game 3

Head coach Larry Drew decided to switch things up prior to Game 3 and started a big lineup of Jeff Teague, Devin Harris, Josh Smith, Al Horford, and Johan Petro. They got out to a rocky start falling behind 8-1 two minutes into the game, but proceeded to go on a 53-22 run to end the first half with a 24 point lead. By going big, Atlanta was able to have Josh Smith guard Paul George. Smith's length forced George to be more of a jump shooter, and George struggled to knock down his shots going 4-of-11 from the field on his way to an inefficient 16 points and nine rebounds.

"I was just trying to get a body on him," said Smith. "Knowing and understanding that he is the focal point of the offense on the perimeter and try to stay engaged [on him] and try to be elusive as far as pindowns and pick-and-rolls are concerned. Basically just keep a body on him, and that was pretty much the gameplan."

On the offensive end Smith had a big advantage on George in the post, and the Hawks exploited that throughout the game. Smith had 14 points on 6-of-13 shooting, but he forced help defenders to come over and was able to pass out of the double to create looks for others with six assists.

Al Horford was the star of the game, recording playoff career highs with 26 points and 16 rebounds. Al credited playing more aggressive to the reason for the uptick in his production.

"I was just being aggressive, playing with a lot of energy," said Horford. "My teammates did a good job time and time again of getting me easy baskets. They were finding me whether it was off help or drive and kick. Defensively, I just wanted to set the tone and be more aggressive. I go out there with that same mindset every game. Tonight I had to step up and make some plays on the offensive end."

Horford started the game slowly, but a couple hard fouls by Tyler Hansbrough followed by a flagrant foul by David West woke Horford up. Al had eight points, three rebounds, and one block in the six minute stretch after those fouls.

"You know, sometimes I guess it takes something like [that flagrant foul] to get me going more than usual," said Horford. "I always try to go out and play pretty hard, but after that I was pretty upset so, yeah, that probably fired me up."

While Johan Petro started the game (and played well), it was Ivan Johnson that had the biggest impact off the bench. Johnson came in and played 26 minutes and did what Ivan does. He had seven points, seven rebounds, five fouls, two steals, and got under the skin of David West, Roy Hibbert, and Tyler Hansbrough. Johnson's productivity allowed the Hawks to keep Smith on George throughout the game because he was able to play interchangeably at the four or five without there being a drop in production on either end of the floor.

After the first two games, Larry Drew harped on his disappointment in how the Hawks responded to the Pacers' physicality. In Game 3, the Hawks and their big lineup were the aggressors and seemed to have the Pacers frustrated with the physical play, leading to a lot of bad Indiana shots and turnovers. The Pacers shot just 27.2% from the field (the lowest in the playoffs since 2005 when, welp, the Pacers shot 26.9%), just 16% from three and had 22 turnovers leading to 24 points for the Hawks. I mean, this is awful. (SO MUCH BLOOD) 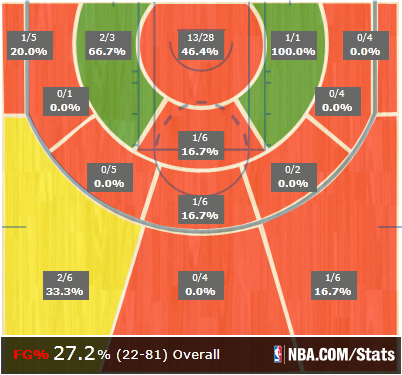 The Pacers shot the ball poorly even when they got open looks, but the Hawks defense did a much better job of forcing the Pacers to take jumpers rather than layups. The big lineup played a big role in that, as did just the rise in the general level of energy and intensity that the Hawks played with.

After the game, all of the Hawks talked about how the crowd played a big factor in keeping their energy up. It was by far the best crowd of the season at Philips Arena (s/o to all of you in attendance, great job), and the players took notice and responded.

"We just picked it up," said Horford. "We just turned the energy level up. I thought the crowd was a big part in that. They got us going after that timeout [in the first quarter]."

We can expect to see the big lineup once again as the Hawks will be back at home Monday for Game 4 with a chance to tie the series up before heading back to Indiana for Game 5, and the Hawks hope to see another raucous Highlight Factory crowd to help them.

Pacers vs. Hawks: Atlanta rolls over Indiana 90-69 in Game 3