When the Hawks lose in the playoffs, they lose in style. Since 2008, Atlanta has lost 29 playoff games in their six appearances by 531 points, which makes for an average of 18.3 points per loss. The Hawks almost hit that number on the mark Sunday afternoon in Indiana, losing 107-90 in a lackluster effort.

1. They are the Hawks, they just do this sometimes.

2. The Hawks thought they were playing at 1 PM Central time, not Eastern time.

3. David West made a pre-game bet with Josh Smith that he couldn't make 10 jumpshots. (Josh probably just made that bet with himself)

4. Larry Drew was confused and thought Johan Petro was Al Horford and played him for 11 minutes in the second half before realizing who it was.

5. Tyler Hansbrough took all of the Hawks energy prior to the game Space Jam style and turned into a Monstar. (Don't rule this out)

Whatever happened, the Hawks looked pretty awful, aside from a few brief spurts that gave Hawks fans the ever-so-slightest feeling of hope. The Hawks started strong with good ball movement, an aggressive Jeff Teague, and some good defense. They led 13-12 with 6:30 to play and it looked like it would be a good, close game. Then the Hawks said, "Ha! Gotcha!" and let the Pacers score 34 points in the first quarter to take an eight-point lead.

Paul George was dominant with his first career playoff triple-double. George finished with 23 points, 12 assists, and 11 rebounds, but he only shot 3-of-13 from the field. How did he score 23 points you ask? Oh yeah, he rented a timeshare at the free throw line going 16-of-17 from the charity stripe (emphasis on the charity). Credit to George for attacking the basket and create contact to force the referees to make a decision. Unfortunately for the Hawks, the refs almost always decided against the Hawks, with a number of "Did he make it? No, okay foul then" whistles coming after a George lay-up rolled off the rim. The Hawks took just 14 free throws (George MADE 16) and made just seven, compared to the Pacers who went 30-of-34 from the line. The Hawks failure to get in the paint consistently, especially their guards helped lead to the discrepancy and in Game 2 they can't allow that to happen again.

The elephant in the room for the second half was Al Horford's lack of minutes. Horford played just 28 minutes in the game, and sat for the end of the third and beginning of the fourth. The Hawks bench was doing an excellent job, and cut the Pacers' lead to nine points, so I can understand Drew wanting to go with the hot lineup. However, Horford was having an excellent night, and frustrated Hibbert throughout the first half. Horford should have been in the lineup earlier in the fourth for Johan Petro. Drew could have staggered his rotation to bring Horford back to augment the play of the bench, rather than riding the bench until the six minute mark before bringing the entire starting unit back in.

The Hawks tried to go small, and had success defending the interior, limiting Roy Hibbert and David West to a combined 29 points and 17 rebounds. The problem was on the wing where Kyle Korver tried to check Paul George. George was too quick for Korver and was able to get in the paint at will to force help defenders to come over. George took advantage by going hard to the rim and drawing contact as well as passing out to open teammates.

Larry Drew will have to look at some different lineups for Game Two to try and contain George. There seem to be two options for the Hawks with regards to a lineup change. The first option is to put Anthony Tolliver or Dahntay Jones in the starting lineup and bring Korver off of the bench. This would give the Hawks a longer defender that could stay in front of George (theoretically). The downside is the obvious hit the Hawks offense would take with Jones and Tolliver on the wing, neither of which are enough of a threat to force defenders to stay on the perimeter with them. This would put more pressure on Smith and Horford in the post because the double would be quicker to come from the wing

The second option would be to go with the big lineup. The Hawks had success in their first match-up with the Pacers playing with the big lineup and matching Josh Smith up on Paul George. However, they had Zaza Pachulia to play the center rather than Johan Petro. Petro played surprisingly well in the first game, but I'm not sure we want to play him substantial minutes. They could also play Smith/Horford/Ivan Johnson, which would allow them to keep their speed advantage in the frontcourt and play Smith on George. Ivan's strength can match-up reasonably with West or Hansbrough, which keeps Smith away from West who bullies and frustrates him into jumpers. The Smith/Horford/Johnson lineup has been effective at times and Larry Drew went to it fairly regularly in the final month of the regular season. I think it is unlikely to see Ivan start (although I think it's the best option), but I do believe Drew will go with those three on the floor together more often in Game 2, especially if George gets hot.

No matter what Atlanta does, they'll have to do a better job breaking down the Pacers defense. I felt that the key to the series on the offensive end would be drawing Hibbert out with the pick-and-pop to open up the driving lanes for Teague and Harris. The Hawks went to the pick-and-pop sparingly, with Horford only taking 4 mid-range shots, and it showed in the inability of the Hawks' guards to get to the rim. Teague and Harris struggled to convert from inside as you can see here, due to a combination of Hibbert's presence and a lack of aggression from the guards. 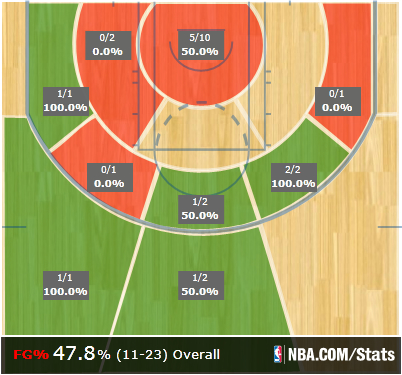 The Hawks will need to find ways to get more production from the interior. Whether it's with pick-and-pop or running more sets with Al as the trigger man at the top of the key, the Hawks need to open up the paint by drawing Hibbert and West outside. As we've said for eight years, Josh Smith needs to play more efficient offense. He was 7-of-15 from the field, but just 2-of-9 outside the paint. Smith was frustrated early by West and flat out stopped playing inside. Smith cannot get discouraged as easily from playing inside, and needs to step up to the challenge rather than step out for bad jumpers. Playing Smith on George would encourage him to take the mismatch and play in the post, but even if he plays against West, he has to be more committed to the post.

The loss was disappointing and changes definitely need to be made, but the task facing Atlanta is not impossible. They need to involve Horford more, switch their match-up on George, and do a better job getting the offense going inside-out. The Hawks will take the next two days to regroup before Wednesday night's game, and we'll just have to see if they make the necessary adjustments, if not, they're in serious trouble.