The Atlanta Hawks rested most of their players for the majority of the game and lost 113-96 to a surging Toronto Raptors team that has rattled off four straight victories over playoff teams.

The Toronto Raptors recorded their fourth straight victory, all over playoff teams, against the Atlanta Hawks in dominant fashion. (Speaking of fashion, the Hawks came out all wearing white headbands to signify unity. It didn't work well and most players abandoned the headbands at the half) After the Hawks took a 19-18 lead in the first quarter, the Raptors took over and scored 66 first half points to the Hawks 51. The Raptors maintained a healthy lead throughout the game as they cruised to the easy victory. Toronto was led by DeMar DeRozan's 30 point performance. DeRozan shot 11-of-17 from the field including 3-of-5 from three point range. Rudy Gay added 22 points for the Raptors along with five assists and four rebounds. 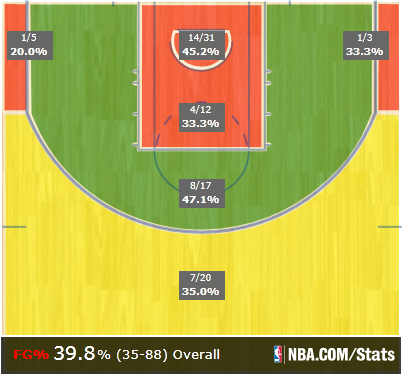 Atlanta missed 17 shots inside the restricted area on the night. The Hawks were 20-of-53 (37.7%) from the paint and corner threes on the night. Essentially, Atlanta had it's worst offensive night of the year, which can be attributed to the Hawks sitting their starters and key players for the majority of the game.

Al Horford sat out with a sore shoulder and DeShawn Stevenson was not with the team due to illness. Before the game head coach Larry Drew said he would monitor minutes, and that he was most concerned with having his players healthy for the playoffs.

The only starter that played more than 18 minutes was Johan Petro, and, well, it's Petro. Josh Smith played 13 minutes, Jeff Teague played 18, Kyle Korver played 18, and Devin Harris played 17 minutes in the loss. After having two key players go down to season-ending injuries this year (Lou Williams and Zaza Pachulia), Drew said he did not want to suffer any setbacks in the final two games of the season. In that regard, tonight was a success.

Rookie Mike Scott recorded his first career double-double with 12 points and 12 rebounds. The Hawks other rookie, John Jenkins, struggled shooting the ball going 2-for-13 from the field in one of his worst outings in what has been an otherwise very good season. Kyle Korver led all Hawks scorers with 13 points followed by Scott and then Ivan Johnson, who had 12 points and 10 rebounds, and Shelvin Mack, who had 11 points.

Atlanta is now tied for the fifth seed with the Chicago Bulls with one game remaining, and the Bulls own the tiebreaker over the Hawks. Atlanta is in New York to face the Knicks tomorrow night in a game that figures to see a lot of the stars resting on both benches. The Bulls are at home facing the Wizards, and I'm not sure Tom Thibodeau knows what resting players means. The fifth seed would mean Atlanta would face the Brooklyn Nets in the first round, while the sixth seed would be a match-up with the Indiana Pacers.

Raptors vs. Hawks: Atlanta closes out home slate against Toronto