The Atlanta Hawks took the floor against the Toronto Raptors with every player wearing a headband to show team unity heading into the playoffs.

The Atlanta Hawks have bragged about their team chemistry all season long and they took the floor Tuesday night against the Toronto Raptors with every player wearing a headband as a sign of team unity. 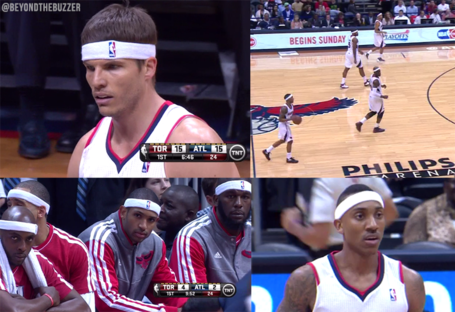 While headband Kyle looks somewhat awkward it hasn't effected his shooting stroke as he sank his first two three point attempts and extended his consecutive games streak with a make to 73 games.

H/T to Beyond The Buzzer for the pic

Raptors vs. Hawks: Atlanta closes out home slate against Toronto