Playoff Preview: How the Hawks matchup against the Nets and Pacers

The Hawks are a game up on the Chicago Bulls for the fifth seed in the Eastern Conference. Atlanta will play either the Indiana Pacers or the Brooklyn Nets in the first round of the playoffs. Here, we breakdown the potential match-ups.

Share All sharing options for: Playoff Preview: How the Hawks matchup against the Nets and Pacers

With two games to play this season, the Hawks control their own destiny for the fifth seed in the East as they are one game up on the Chicago Bulls. With Atlanta playing the Toronto Raptors at home on Tuesday and the New York Knicks on the road Wednesday (who will likely be resting key players), the Hawks have a great opportunity to get two wins and lock up the fifth seed. The question on the minds of many Hawks fans has been; Which match-up would be the best? We will breakdown the match-ups in a few different categories in order to determine the answer.

Atmosphere/Excitement: The Nets win this hands down. The Hawks going up against Joe Johnson in round one would be somewhat poetic as well as being one of the bigger storylines of the postseason. For Hawks fans, it would bring an added level of excitement and as a writer it is the best case scenario for the obvious reasons. A Nets series would most likely get picked up, for a few games if nothing else, on ESPN, which could be good or bad depending on if they put a certain color commentator on the game (his name rhymes with Ron Garry).

An Indiana series would feature some very good basketball, but the off-court stories would be non-existent. Indiana is one of the least exciting teams in the playoffs both on the court and off the court (they're very good, but not a ratings booster). It would be all but guaranteed that a Hawks/Pacers series would be relegated to NBATV for the majority of the games, which would be unfortunate for those of us that don't have NBATV *raises hand*.

Defensive Match-ups: The Nets offer more problematic match-ups for the Hawks on the defensive end than the Pacers do, just because of the number of offensive threats on their roster. Brook Lopez will be an issue for the Hawks especially now that Zaza Pachulia is out. Lopez has averaged 19.3 ppg against Atlanta this season on 52.5% shooting. Lopez's versatility and size has frustrated Horford, who struggles to contest his shots in the paint or from the mid-range.

Indiana has it's own massive center in 7'3" Roy Hibbert, but Hibbert has been miserable against the Hawks averaging just 9.5 ppg on 46.2% shooting. Instead, David West has been the player that has given Atlanta the most problems. West is averaging 21.3 ppg shooting 53.2% from the field. West has really hurt the Hawks on pick-and-pops (something that has been an issue for Atlanta all year), where he has been able to get himself open mid-range jumpers (and even some threes) that he has knocked down consistently.

Joe Johnson and Paul George each present unique challenges on the perimeter for the Hawks, who lack a strong defensive presence on the wing. Johnson has been kept in check by Atlanta this season. The Hawks have clearly placed their emphasis on not letting Johnson get in rhythm and have attacked him with aggressive double-teams to force him to pass. Johnson is averaging 14.8 ppg on 36.1% shooting against Atlanta with only 3 assists per game. In the Hawks wins, Atlanta has doubled and recovered well against Johnson, but in the losses Brooklyn has been able to get easy baskets after one or two passes out of the double-team. The Hawks ability to rotate out of doubles on Johnson has been crucial to their success against the Nets this year.

George has fared better than Johnson against the Hawks averaging 18.3 ppg on 44.8% shooting. When George has had success it has been shooting from the outside. The Hawks have often countered the Pacers' length with big lineups this year, which has meant Josh Smith has been assigned to guard George. George has been most successful when shooting from the outside (40.9% from three) or when using his quickness to get to the restricted area (69.2%). Smith has bothered George on post-ups and from the mid-range, where his length had given George problems.

At the point, Deron Williams is a much tougher match-up for Jeff Teague than George Hill. Williams struggled early in the season and has not been particularly great against Atlanta. He averaged 17.8 ppg, but he shot just 37.5% from the field. However, Williams has been playing extremely well in the final month of the season and appears to be returning to his All-Star form.

Rebounding: The Hawks have rebounded the ball reasonably well against both teams, but struggled more in dealing with Brooklyn. While Hibbert provides great length, he is not one of the stronger centers in the NBA and the Hawks have been able to neutralize him on the glass. Hibbert is averaging just 7.3 rebounds per game against the Hawks. Atlanta has a rebound rate of 50.2% in the four games against the Pacers and have handled the starting frontcourt of Hibbert and West on the glass.

The Nets have given the Hawks more difficulty as Atlanta has a 47% rebounding rate. Like Hibbert, the Hawks have been able to keep Lopez in check as Brook has averaged 7.5 rpg against Atlanta this year. While Lopez, a relatively poor rebounder for a center, has not been an issue on the boards, Reggie Evans has given the Hawks fits. Evans is averaging 14 rebounds per game against the Hawks, including two 20 rebound performances. Evans' tenacity on the boards has bothered the Hawks, who sometimes lack the same type of effort in crashing the glass.

Scoring: Against Brooklyn, the Hawks are shooting 48.9% from the field. Atlanta's success against the Nets has been on the interior, where they have shot 102-of-179 (57.9%). Lopez is not nearly as good of a defender as he is an offensive player and Reggie Evans is downright awful defensively, so Atlanta has a distinct advantage on the offensive end in the frontcourt. When the Hawks have run their offense through the post, they have had success. 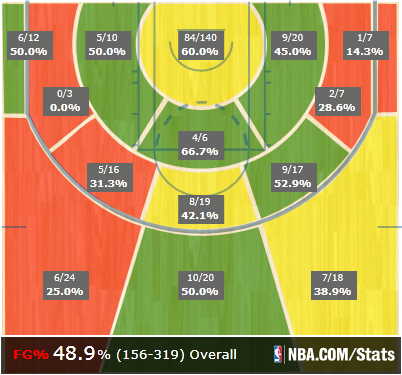 The Pacers are a better defensive team than the Nets and are anchored by Hibbert's impressive presence in the paint. Atlanta's shot chart reflects this difference. The Hawks are shooting a solid 47% from the field, but they struggled with scoring on the inside in comparison to the Nets going 84-of-163 (51.5%). Hibbert's presence accounts for much of that disparity. However, while Horford has a tough time on the inside against Roy, Al's ability to stretch the floor and hit mid-range jumpers allows Horford to pull Hibbert out of the paint and open up driving lanes for the guards. 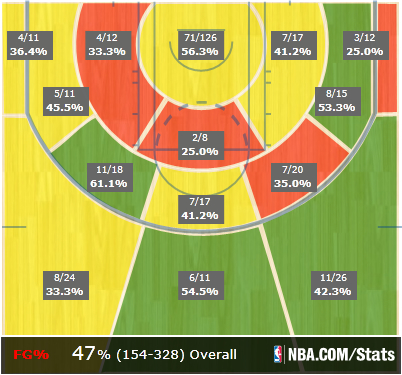 Current Form: The Pacers are limping into the playoffs as the three-seed. Indiana has lost four of their last five games (including a loss to Brooklyn) and have struggled on the offensive end averaging just 89.6 ppg. The Nets are playing some of their best basketball of the season coming down the stretch, going 4-1 in the last five and have been hot on offense averaging 102.8 ppg. As previously stated, Deron Williams seems to have found his offensive rhythm and the Nets appear to be peaking at the right time.

The Pacers appear to the be the best match-up between the two, but I don't think either team presents an impossible challenge to Atlanta. The Hawks can match-up with either team, and I think that, based on the games we've seen between these teams this season, either series would be closely contested and likely come down to a sixth or seventh game. The Pacers are the inferior offensive team, but they play, as everyone likes to say, a "playoff style," which is another way of saying a slower-paced, defensive-minded game. A series against the Pacers would mean the Hawks would have to be sharp in their offensive sets and really move the ball to create open shots and driving lanes.

The Nets are not as good of a defensive team and can be exposed on that end of the floor, but they possess a great amount of offensive fire-power that will require Atlanta to be at the top of their defensive game. The one factor that I can't quite figure out with the Nets is Joe Johnson and whether his presence in a series would be more motivation for Atlanta or Brooklyn. A part of me is afraid that Joe will come out looking for revenge and could take over a game or two and swing the series in the Nets favor. The other part of me thinks it would bring the best out of the Hawks, especially the core of Teague, Smith, and Horford, who might take the challenge as an opportunity to show the world that they do not need Johnson to succeed.

While I think either first round match-up is winnable for the Hawks, the final reason I feel the Pacers are the best opponent for Atlanta is what it would set up should the Hawks move into the second round. While the New York Knicks (or even the Boston Celtics) are very tough and the Hawks have struggled against them, I feel much more confident that Atlanta could be competitive in a series against them than the seemingly unstoppable Miami Heat.