Video Breakdown: How the Hawks use Al Horford in their key sets

The Hawks have two go-to sets that Larry Drew will dial up when the Hawks are desperate for a basket, and both are drawn up to get Al Horford an open lay-up or dunk. Here I break down the two plays and show how Drew's design creates confusion for the defense.

Share All sharing options for: Video Breakdown: How the Hawks use Al Horford in their key sets

This season the Hawks have become one of the best teams in the league at set play execution. I've looked at the different plays they run to free up Kyle Korver and Kris Willis broke down Al Horford's game winner against Milwaukee already, but we've yet to dive into the Hawks' go-to sets: the Al Horford/Josh Smith pick-and-roll and the Al Horford/Kyle Korver pindown. These two sets have been the most used and most successful end-of-game plays for the Hawks (and any other time the Hawks are in a pinch and need a score).

The Horford/Smoove pick-and-roll is, in the words of Mike Prada of SB Nation NBA, "one of the league's five most unstoppable plays." The premise and design are simple. Josh takes the ball at the elbow, Al slides across the free throw line from the opposite elbow before slipping to the basket for the lob from Josh. (Josh represented by 4 and Al by 5 in the diagram below) 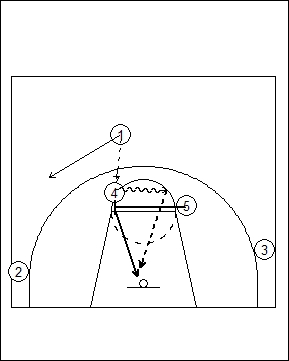 Horford's speed and Josh's hard dribble makes the play nearly unstoppable as Al is able to make the cut and roll to the basket before Josh's man can react and before any help can come from the baseline. Josh's ability to put the ball on the floor and drive means Horford's man must hedge the screen to prevent the easy drive and finish from Smith. The Hawks go to this play a couple times a game, and it is often dialed up late in games when the Hawks have to get a score, as we saw in a tie game in Los Angeles earlier this week.

And in a tie game late against Utah.

And down one late in New York.

One would think with all the video available on this play teams would find a way to better defend it, but, despite it's simplicity, it is extremely hard to stop. Al's quick step to the basket means Josh's defender would have to recognize the play early and drop down underneath the Al screen in order to prevent him from rolling and switch with Horford's defender. If not, Horford's man has to stay with Al which would allow Smith to turn the corner for an open dunk or layup.

The Hawks frequently run pindowns for Kyle Korver, and when the defense gets aggressive in jumping Korver they have Horford slip to the basket for an open layup. It is one of Drew's favorite late game in-bounds plays and Josh Smith called it their "Fourth-and-one play." This is the play design for the inbound version of the play, with Kyle Korver taking the ball out, Al as the five, and Josh as the four. 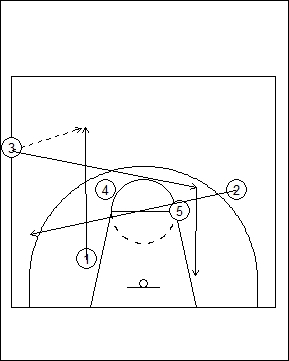 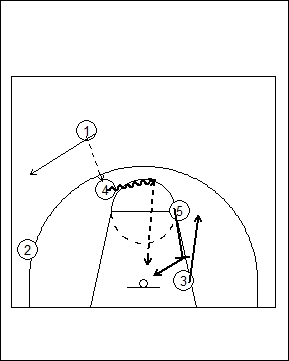 Teague gives the ball to Josh at the elbow then clears out to the wing. Korver makes his move back toward the wing as Horford comes down as if he's setting the screen. As Horford's man steps up in anticipation of a switch on the screen, Al side-steps Kyle's man and slips to the basket where Josh fires a pass to him.

I talked about this play with Josh after the Raptors game and he said they go to it whenever the opposition is jumping Kyle or wants to switch the screen. Smith says if they see the big stepping up on Korver early in the game, they know they will have it set up for the slip later. Like the pick-and-roll, the key to the play is Al's quick step to the hoop when his defender is frozen to create separation.

Here is the game-winning play against the Raptors and you'll see the big step up leaving Al all alone underneath.

Here is the exact same play from Monday's loss against the Lakers that gave the Hawks the lead with 25 seconds in the game.

They will also use the same concept with Al setting the screen, but slipping late if Kyle's man tries to fight through for a pass from Korver as they did here against the Hornets.

As you see, the Hawks go to these plays regularly down the stretch of games and do not change the design in an effort to disguise it. They just rely on their diagnosis of the defense, sharp movement, and great execution from Al and Josh to create chances. So next time you see the Hawks with a late-game inbound play, look for one of these two plays a majority of the time.