The Atlanta Hawks lost in Boston Friday night, 118-107, and after the game Larry Drew lamented the shot selection as part of the reason for the loss. Could he have been talking about someone in particular? You read, you decide.

Share All sharing options for: Josh Smith may have been singled out by Larry Drew in Hawks loss in Boston

The Hawks didn't have Al Horford, Zaza Pachulia, Lou Williams or Devin Harris for this game. John Jenkins played three minutes and twenty-two seconds before suffering a concussion and having to leave the game.

But they did have Shavlik Randolph and, you're not going to believe it, that's all that Boston would need.

"If you are not taking good shots, it's as good as a turnover," Drew said.

Randolph bolstered a usually flaccid Boston effort on the offensive glass, grabbing seven of his 13 rebounds on that end. He also blocked two shots and scored 12 points, an unexpected double-double that served to personify the effort of the Boston team.

There were bright spots for the Hawks, who continued to fight despite not defending the dribble, iso-game very well. Mike Scott scored 19, Anthony Tolliver was 4-7 from three-point range and Jeff Teague was somewhat effective in a 17 point, seven assist effort.

Josh Smith played directionless offensively without his 6'10 partner in frontcourt crime Horford and seemed to be the target of some comments from Hawks coach Larry Drew afterwards,

Smith seldom took the ball to the basket, despite a lack of prolific shot blockers inside for Boston. Instead, Smith often chose the path of least resistance, lobbing long two after long two until his shot chart looked like this: 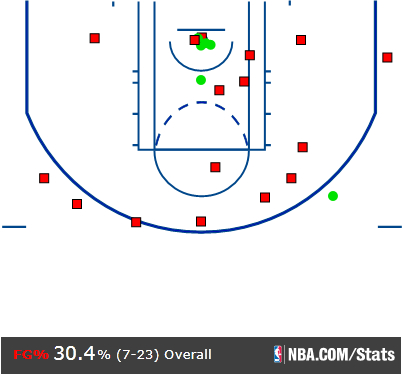 So maybe Drew was talking about someone else when he lamented the lack of shot selection but bear in mind that the Hawks shot 50.7% separate from Smith's performance above so, yeah, maybe not.

Scott did finish with 19 points on 6-10 shooting, but I'll probably remember the two missed dunks the most, scarecrow. The first one Scott didn't need to flush, he won the baseline battle, got to the other side of the hoop, and could have laid it in, but tried to dunk and missed. On the second dunk he tried to take on Shavlik the Magnificent, so the ensuring missed dunk probably shouldn't have surprised.

Horford, Jenkins, Lou, Zaza -- You're trolling me, aren't you, NBA?

I know Celtic fans have been crying about Jason Terry (24 points on 7-10 shooting) all season, but dude knows how to dial it up against the team that drafted him. Great job, great shooting, especially in the second quarter when the Hawks forgot he could shoot and he dropped four threes on their beaks.

With his play this season, Jeff Green (12-20, 27 points, four rebounds, four assists) has quickly silenced the memes that the Kendrick Perkins trade was bad for Boston and that his offseason contract was terrible. Well done, sir.

Hawks vs. Celtics: Atlanta set for another clash with Boston