Mike Scott logged another double-double as the Bakersfield Jam bounced back with a 111-98 win over the L.A. Defenders.

Share All sharing options for: Mike Scott shines in Bakersfield's 111-98 over Los Angeles

Mike Scott recorded his second straight double-double on Sunday finishing with 27 points and 10 rebounds as the Bakersfield Jam bounced back with a 111-98 win over the L.A. Defenders.

Scott hit 11-19 shots and was 5-6 from the free throw line and did the majority of his damage in the paint where he was 8-11 from the field. 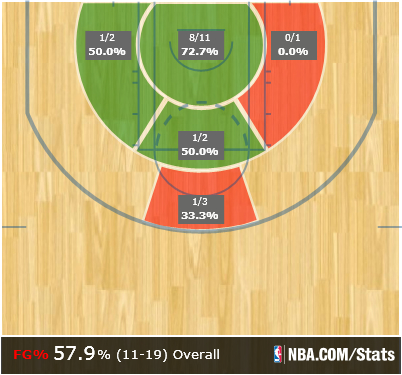 Jerel McNeal also put up 27 points for the Jam in the victory. Damion James recorded a double-double of his own with 17 points and 13 rebounds. Renaldo Major added 14 points while Adam Koch chipped in 11. Morris Almond led the Defenders with 24 points while Elijah Milsap finished with 21.

Bakersfield is off on Monday before the Texas Legends pay them a visit on Tuesday. The Hawks are in Denver Monday night and return home against the Philadelphia 76ers on Wednesday. There has been no indication on how long Scott's stay in the D-League will last but he could play again with the Jam on Tuesday and be back in Atlanta in time for Wednesday's game.

Mike Scott reassigned to the D-League by the Atlanta Hawks