Hawks roll past Grizzlies behind Teague, Smith, and Horford.

The Hawks snapped their two-game losing streak with an impressive 103-92 victory over the Memphis Grizzlies Wednesday night. Jeff Teague led Atlanta with 22 points and a season-high 13 assists.

Share All sharing options for: Hawks roll past Grizzlies behind Teague, Smith, and Horford.

The Hawks trailed Memphis 5-4 with 8:31 to play in the first quarter before taking the lead for good. Atlanta stretched their lead to as many as 23 before cruising to a 103-92 win to complete the season sweep of the Grizzlies. Jeff Teague led the Hawks with 22 points and a season-high 13 dimes in his fourth 20/10 game of the year. Teague was aggressive early and often and was efficient running the offense and scoring. The Hawks had 28 assists on 38 made baskets and shot 51.4% from the field. Joining Teague in double figures were Josh Smith (19 points, 11 rebounds, six assists, three blocks), Al Horford (17 points, 11 rebounds), and Kyle Korver (12 points, six boards). These four shot a combined 27-of-44 (61.4%) from the field and each was solid defensively. 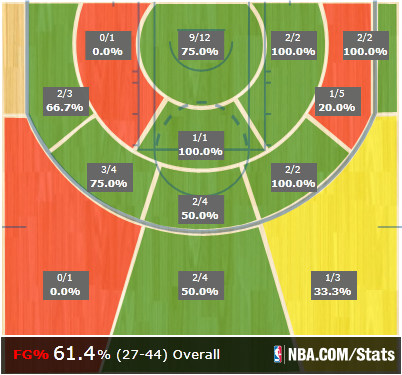 The Hawks controlled the glass with a 46-38 edge on the boards and stayed out of foul trouble committing only 16 fouls (half the amount of their game Tuesday in Indiana). The Hawks ran the Grizzlies and while they only forced eight turnovers, they turned rebounds into fast-break opportunities scoring 16 fast-break points on 12 attempts. They could have had more, but at times would look for the extra pass too often, allowing Memphis to recover.

Jeff Teague spoke briefly after the game about the team's performance and his last two games.

"We were clicking on all cylinders. Al was getting out and running, getting rebounds. Josh was getting out and leading the breaks, and guys were making shots...I'm just playing, trying to get wins. Doing whatever it takes to get a win, I think that's the whole group. We're all taking it upon ourselves to get better every day and help our team get victories."

Teague continues to be a fascinating and frustrating player due to his sporadic play, but as of late, he's shown off "Aggressive Teague" which happens to be the best Teague and it has shown on both ends. He's done a better job running the offense and getting the Hawks into their sets early which allows them to run through their full compliment of options on each play. Defensively, he's been more active and done a better job pressuring ball-handlers and fighting through screens. Larry Drew (as he frequently does) pointed to Teague as the catalyst for getting the Hawks going early on.

"Jeff Teague got off to a really good start in that first half, which really set the tone for the game. You could see Memphis was laboring a little bit to get up and down. We were trying to put and emphasis on really pushing the basketball."

The Hawks improved to 10-2 when Josh and Al record double-doubles and they did so by controlling one of the top frontcourts in the NBA. Horford limited Marc Gasol to 4-of-13 shooting for 14 points and 10 boards and Josh did a solid job bodying up Zach Randolph who still had 20 points but only seven rebounds. Smith talked about playing Z-Bo and the keys to keeping him in check, especially on the glass.

"Staying engaged to him. He's one player that will beat you up on both ends of the floor. He's a big body, soft hands, he uses his positioning well to get offensive rebounds. You just gotta make a conscious effort of staying glued to him and being able to limit his offensive rebounds and touches on the block."

Horford got in foul trouble early as he did in Indiana, but was able to keep himself in the game by playing physical but not taking too many chances. Al had his 25th double-double of the season and the Hawks improved to 18-7 in those games. Horford continues to be consistent and seems to have worked through the early season shooting struggles from both the field and the free throw line of late.

Anthony Tolliver got his 2nd start of the season and the Creighton Jay pride was flowing through the Hawks lineup with him and Kyle Korver. Tolliver was a big factor on defense holding Tayshaun Prince to six points and two boards and he gave the Hawks options defensively they don't have with their smaller lineups. Drew said it reminded him of last year having Joe and Marvin to switch screens with Al and Josh being the same height, and he credited the Hawks rebounding improvement to Tolliver's presence in the lineup and their ability to keep a big body on the Grizzlies frontcourt even on switches. Tolliver's play led to me tweeting this. That's all you need to know.

The Hawks victory improves them to 27-21 on the year, keeping them solidly in the sixth spot in the East. Atlanta will face the New Orleans Hornicans (or Pelinets) on Friday at Philips Arena as they try to string together some wins and climb back in the conversation for the three or four seed.