The Atlanta Hawks and the Great Free-Throw Mystery

It's no mystery the Hawks this season have done a horrible job at the free-throw line and as a concerned fan, I am going to take the time to get to the bottom of this.

Share All sharing options for: The Atlanta Hawks and the Great Free-Throw Mystery

In my previous article addressing the the effect that Lou Williams had on this team, I mentioned in the article that Lou is shooting a career high from the line despite the team being so horrible overall this year. Believe it or not, Atlanta is not dead last in the NBA in FT%, instead we place at 27 out of 30 with an amazing percentage at 69.6%. Well seeing that we are so low and a player like Lou is actually shooting a career high, it made me want to look at the team and each of the players to see where and how they contribute to this horrendous 69.6%. With each player I will look at their FT%, how many free throws they average a game, a comparison to career average and finally what percentage they take for this team. With the help of ESPN.com and my calculator, I will bring you the stats that I'm sure you are all dying to see. So without waiting any longer, lets get this disgusting and painful analysis started.

Next we have Al Horford. Horford is shooting 60.2% this season when compared to to 74.2% career average.He is attempting 2.9 FT's per game this year while only hitting 1.7 of them. The amazing thing is that for his career, he also averages 2.9 per game but he hits 2.1 of his attempts. So with averaging 2.9 per game, Horford is contributing towards 13.96% of the overall.

The rookie John Jenkins is next time. Jenkins is averaging 89.5% from the line this year and hitting about .5 of them per game.Interesting stat is that while he has only attempted 19 this season, he has only missed 2. As you can guess, with the low attempts he only contributes to 2.1%.

Ivan is the next one on the list. Ivan is another case in which his shooting could be hurting the team since his 59% is way down from last year which was 72%. He seems to only get to the line almost 2 times a game while hitting just a little above one per game. Its low for him but he is contributing towards 7.1%

Surprisingly Kyle is shooting better than he was last year but still slightly below his career average this season which is at 83.7%. Now before you think that he is shooting terribly for him, you have to remember that he hardly gets to the line and each one of those rare misses will kill his average. If you didn't guess it, Kyle is getting to the line 1.2 times per game and hitting at exactly 1. So with Kyle hardly getting to the line, he only contributes to 5.4%

#22, I think his name is Anthony Morrow is shooting at 89% which is very close to his career average. Ammo is worse then Kyle in getting to the line since he only goes there .8 times per game and hitting at .7. So yeah this low number puts him at 2% for the team.

Next we have the man, the myth, the legend of ZAZA PACHULIA. Zaza is doing really well for him and shooting slightly above his career average at 74.1%. He gets to the line exactly 2 times an game and hits about 1.5 of those time. Zaza is doing good for him and contributing towards 9.4% towards the total team free throw percentage.

Petro is another one of those players that knows his role. He has attempted 3 free-throws this year and made all 3 of them shooting at 100% (feel free to add your jokes in the comment section). so yes with only taking 3, he is adding to only .33% of the free-throws for the Hawks.

The other rookie Mike Scott is shooting exactly at 75% for the season. He seems to be getting to the line more than I originally thought at 1.1 times per game and hitting .9 tomes. Oh yes and Great Scott his is contributing to 2.7% of the teams free throw percentage.

I feel like my next one needs to be a whole separate post and I'm sure this is the one that everyone reading this wants to see. So without waiting any further, I'll give you the number for Josh Smith. This year Josh is shooting an abysmal 49.7% from the line and is way below his career average. He has taken 175 shots from the line so far this year while getting to the line 4 times a game and hitting slightly below 2. Well I'm sure most of you are thinking that he is most of the reason that our team percentage is so low, well to let you officially know, Josh is responsible for a team high of 19.4% of the teams shooting.

Well I had to catch from breath from the last one before I moved onto everyone's favorite 3-point chucker Deshawn Stevenson. The 5 dollar bill man is shooting.............yes I'm reading this right..............38.5% from the line which is (I kid you not) his exact same percentage for 3 point land this year. Well in his defense Deshawn is attempting .4 shots from the line while hitting .2 of those times while only shooting 13 free throws this season. Well his low number only contributes to 1.4% of this teams free throws.

Next up we have the M-V-Teague himself. Jeff is shooting a career high of 86.4% from the line and getting to the line 2.5 times per game and hitting 2.2 of those times. Now in my opinion Jeff should've been to the line more, but let me stop before start a rant. Jeff's improved shooting is contributing to 13.1% towards this team overall percentage.

Anthony Tolliver, is the last healthy Hawk on the list. Tolliver is hitting slightly above his career average at 77.3%. He gets tot he line .7 times a game and makes a shot .6 of those times. His limited shooting as contributed to 2.4% of the teams overall percentage.

Finally last on the list we have Lou Williams. As I said in my last article, Lou is shooting a career high at 86.8%. Again he was getting to the line 3.1 times a game and making 2.6 of those shots. We will miss him because he contributed to 13.4% of the teams shots.

Well that's it and NOW YOU KNOW (I'm bringing it back). Hopefully now you guys can see who contributes to what and that some of these players are actually having a career year despite the overall percentage being so low. Oh yes and now you can join me in yelling at the T.V. who we should be giving the ball to in fouling situations. In the mean time enjoy the funny picture I found let me know of your thoughts. 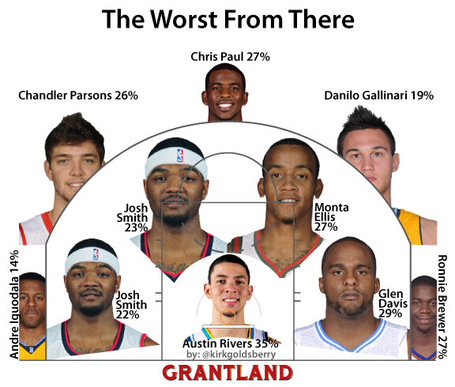