Josh Smith blocks out trade rumors, comes up big in win over Mavericks

Josh Smith has seen his name in his fair share of trade rumors this season and perhaps he helped raise the asking price somewhat with Monday's performance against the Mavericks.

Share All sharing options for: Josh Smith blocks out trade rumors, comes up big in win over Mavericks

Josh Smith stood out in the Atlanta Hawks 105-101 win over the Dallas Mavericks Monday night finishing with 26 points, 13 rebounds and six assists while going 10-15 from the field and 4-5 from three-point range. While the deft touch from the outside isn't something that Hawks fans come to expect nightly from Smith, you can't sell short the meaningfulness of each bucket in Monday's win.

We certainly won't complain about a win but on five of Smith's shot attempts came in the paint which certainly isn't a recipe for success. Of Smith's attempts you can say that few were forced and he has proven to be a much better shooter when he shoots in rhythm and without hesitation. 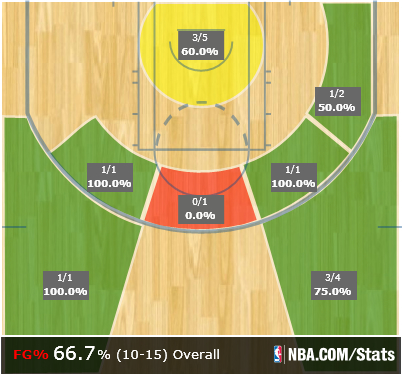 Smith's upcoming free agency hasn't been nearly the sideshow that it could have been although the volume is getting turned up somewhat as we close in on the February 21 trade deadline. To Smith's credit he is playing some of his best basketball of the season of late averaging 19.2 points, 10.6 rebounds, 5.0 assists while shooting 52 percent over his last five games. Smith is shooting a blistering 67 percent from three point range over that span.

That deft three-point shooting might be fools gold and the case could be made that the Hawks won in Dallas on Monday by doing things that isn't likely to produce positive results often. Following the game, Smith reiterated that his concentration is on the court:

''I'm just trying to focus on getting better as an individual on the court,'' Smith said. ''As long as I'm with the Atlanta Hawks, I can only focus on how to make this team better.''

Smith recently talked about his situation with NBA.com's Jeff Caplan and reiterated his support for Atlanta. He talks about having his entire family there as well as being able to drive to home games with his dad. Smith added that he has a lot invested in Atlanta but understands the business side of things. For the first time in a couple of weeks he doesn't sound like a player that has one foot out the door.

"I will say there is a lot invested," said Smith, who has gone on a tear over the last nine games. "I was born and raised there, spent my whole childhood and my whole life there. I will say it's a big investment." But, Smith continued, "Once you understand as a player that this is a business and you don't take anything personal, you kind of worry about just playing basketball."

Rumors will continue to swirl around Smith for the next week and the Hawks may in fact decide to move on if they think that the asking price for a new contract will be more than they are willing to pay this offseason. However, given the strength of these trade rumors it looks like the Hawks may be better off holding onto Smith until the summer where there could be many more options.

Hawks vs. Mavericks: Atlanta looking for rare win in Dallas