Kyle Korver leads the NBA in three-point shooting this season at 46.4% and we are going to look at some of the plays the Hawks run to get Kyle open looks at three-point shots.

Share All sharing options for: Video Analysis: How the Hawks create shooting space for Kyle Korver

Kyle Korver has long been known as one of the premier shooters in the NBA, but this season he is shooting at an incredible 46.4% (his most in a season in which he's attempted more than 200). Here is Kyle's incredible shot chart from three-point range this season. As you see Kyle attempts 22 more threes from the right side of the floor than he does from the left (and hits over 50% from that side), and he usually begins sets at the top of the key or on the right. 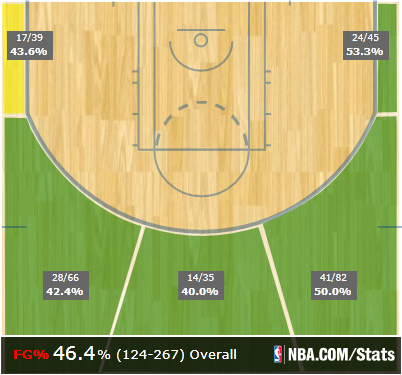 Looking deeper, Korver gets his threes in a few different ways. First is in transition. 62 of his 267 attempts have come in transition and he has made 25 (40.3% per Synergy Sports). Kyle does a great job in transition of getting up the floor and spacing the wings and he almost always sets himself in the same spot right near the break (or as Josh Smith refers to it "the witch's tit"). He runs to that spot on either side of the floor (most times on the right side) and stops. This makes him easy to find for the ball-handler running the break because he always goes to the same spot, and creates a sweet spot for Kyle to hit each trip and helps his rhythm. Here are two examples of Korver running out in transition to his sweet spot.

As you see, Korver breaks out at full speed to get to his spot ahead of the ball-handler in order to make the pass easy for Teague (or whoever else is running the break). The amazing thing is that, despite there being 62 videos of Korver running out in transition and almost all ending in that spot, teams continue to abandon their responsibility on Kyle and instead collapse on the ball-handler. In both of the above videos, the Hawks are in semi-transition and the opposition have all five guys ahead of Kyle, but still bunch up inside and let Kyle get open on the wing. Kyle makes the Hawks transition game an extra dimension because of the spacing he provides opposite driving ball-handlers.

The next play is a staple of most every three-point shooters repertoire (see: Allen, Ray for more examples): the baseline screen. However, it's the way Kyle runs off the screen that makes it so effective. Kyle sets screens up as well as any player in the league because of the great angles he takes. Kyle makes a right angle coming off the screen which runs his defender directly into the screen rather than giving him the chance to avoid the screener.

In this particular play, Kyle runs off a Horford screen (shh, don't tell anyone he moves) and shows how Kyle takes hard angles to free himself off the screen. Kyle works constantly at running off of these screens and setting his feet in order to get his shot up quickly (it doesn't hurt that he's got one of the quickest releases in the NBA). His footwork is on display here as his feet are square to the basket before his shoulders are, and that allows him to turn into the perfect shooting position and elevate before the late contest.

Korver’s baseline run sets up the fake back-cut where he peels back behind a screen from the other big (usually Josh on the right side, Al on the left) to the corner or just above the break.

I chose this angle because you can see how Kyle runs hard to the paint before stopping and slipping past his defender to pop back out on the other side. Korver takes advantage of the opposition's concern with the baseline run, and is able to free himself behind Josh and get a clean look over a late-contest.

The Hawks will also run two different variations on a double screen for Kyle. The first is at the top of the key and has been part of the Hawks’ offense for a long time (we used to run it for Bibby).

You can see Kyle calling the play at the beginning before driving his defender into the paint and creating separation (aka: pushing) to come back through the gap between Josh and Al, who step together and screen off his defender.

The second variation is a stacked set of bigs that Kyle weaves through. Here, two bigs stack up on the wing and Kyle works off of them to free himself for an open look.

This video exemplifies the frustrations that Kyle causes defenders. He runs through the screens the first time and the defender is able to stay with him, so he goes through them again before coming to the top of the wing for a three.

At the end of the clock, the Hawks will often go to a dribble handoff for Kyle. This play is part of every NBA playbook, and the Hawks go to it to get a quick look for Korver.

In this instance, the clock is winding down in the first half and Kyle slips behind his defender, gives him a bump, and runs to the top of the wing to take the hand-off from Teague. The separation from the bump allows Teague to get between Kyle and his defender to screen him off, and Jeff’s defender has to stay under Jeff to stop any possible drive, which leaves Korver with enough room to get off a clean shot. The Hawks have gone to this at the end of games a few times, including the game-winner against Washington.

Kyle is also great when playing the weakside of the floor opposite a post-up. When Josh gets doubled, Kyle works open moving towards the top of the key to create an easy passing lane for Smoove, who is one of the best passers out of the post in the NBA.

Here, the defense collapses onto Josh and Al flattens out onto the baseline to pull the weakside defender towards the hoop to avoid giving up a layup. Kyle slides up to make the pass easier for Josh and is able to get the shot off before the late closeout arrives. With Josh getting mismatches in the post at small forward doubles often come, and Kyle does well to find the open spot on the opposite side while giving Josh an easy target to hit.

Kyle’s shooting has been a huge factor to the Hawks’ success this season. Atlanta is 15-8 when he shoots 50% from three and are 9-3 when he makes four or more three-pointers. Part of the reason is that Kyle’s shooting numbers are a good measure of how well the Hawks are moving the ball. If Kyle is getting looks, they are running their offensive sets and moving the ball. As Kyle told us after his 8 three-point performance against Boston, "I don’t create my own shot." This is true in the sense that he doesn’t create shots off the dribble and that he has to have teammates setting screens and passing him the ball. However, Kyle is one of the best in the NBA at working himself into the open spots on the floor and setting up screens (see: Hamilton, Rip), and in that sense, he creates a lot of shots.

Watching Korver shoot is an experience, and I have been lucky enough to watch him up close after practices and in pre-game warmups. Part of what makes Kyle so enjoyable to watch is how smooth his form is. He has perfect rhythm to his stroke and maintains all of the correct mechanical aspects of a good shooter without becoming too robotic (Jenkins, when he's on, is like this but can get too caught up in the mechanics). The more I watch Korver, in games and in watching hundreds of video clips for this piece, the more I appreciate what he does and the ways Larry Drew tries to get him the ball. I hope that reading this does the same for you and that you will begin seeing these plays and tendencies when watching the Hawks going forward.