Jeff Teague may not be among the Top 10 in NBA All-Star voting, but he turned in an All-Star worthy performance in Atlanta's 127-125 win over the Cleveland Cavaliers in double overtime Thursday night.

Jeff Teague may not be anywhere in sight in the NBA's latest All-Star returns but Atlanta's point guard delivered an All-Star worthy performance in the Hawks' 127-125 double overtime win over the Cavaliers Thursday night.

Teague logged just under 49 minutes against the Cavaliers and finished with a career-best 34 points to go along with 14 assists. Teague was 14-for-24 from the field in the game and hit the game-tying three to send things to overtime as well as the game-winning basket in double overtime as time expired. Mike Budenholzer talked about the Teague's performance following the game.

"Obviously, Jeff Teague made a lot of plays for us, so it was nice for this amazing game to finally be over. The only way it could have been better is if it was a one-point game, so it would've ended either way on his shot."

With Al Horford and DeMarre Carroll out due to injury, Teague along with Paul Millsap and Kyle Korver carried the Hawks in overtime. Twelve of Teague's 34 points came in the extra sessions but none more important than the last as time expired.

"They gave me three cracks at it, so I was really happy to finally get it done. It was supposed to be a pick-and-roll at the end, but they switched on us with Thompson, so I just went for it."

The Hawks were going to run a high pick and roll with Teague and Millsap but the Cavaliers switched it with Tristan Thompson taking Teague. Recognizing the switch, Teague backed it out to get a running go at Thompson. As Thompson back peddled Teague stopped and rose up for the jumpshot.

That jump shot was somewhat of a rare occurrence for Teague on the night as 15 of his 24 attempts came in the paint as he chewed up Cleveland's pick and roll defense repeatedly. 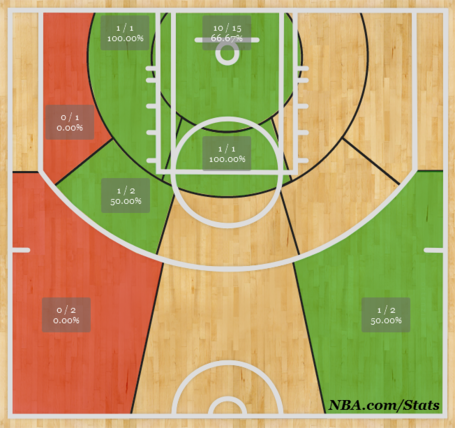 As you can see from the shot chart, Teague did most of his damage in the paint area. He used that penetration expertly to either score or set up his teammates as his game-high 14 assists suggest.

Teague has performed at a high level all season long. His 16.8 points and 8.2 assists averages are career best as is his PER of 17.6. His shooting percentages have taken a bit of a dip but that has more to do with the increase in usage rate he has seen this season. If Teague has struggled from anywhere it has been from three-point range. Yet when the Hawks needed a three to send the game into overtime on Thursday, it was Teague that delivered. Just like he has all season.