Atlanta Hawks: To Buy or to Sell as trade season begins

Are the Hawks building with this roster or is it priced to move? As the NBA begins its trade season in earnest, the question is should/will the Hawks buy, sell or stand pat?

Share All sharing options for: Atlanta Hawks: To Buy or to Sell as trade season begins

When Danny Ferry famously set foot in Atlanta, enjoyed some Taco Mac or some such tasty treat and then jettisoned Joe Johnson and Marvin Williams, he set in motion a change in roster that was intended to begin to build a champion.

Now, the second season into the effort, Ferry has an interesting team, the first under his handpicked coach, Mike Budenholzer, and it's a team that is set up to be portable, meaning that just about any part of this roster could be moved, if Ferry felt like it moved him closer to the title.

But as the Hawks sit 13-12 and in the third spot in an Eastern Conference that is, shall we say, ripe for making hay where there has been little hay before, meaning beyond the second round of the playoffs, the Hawks are faced with the potential to be either buyer or seller during this particular trading season.

Why they should buy:

From NBA Stats, here is the current NBA Standings for the Eastern Conference: 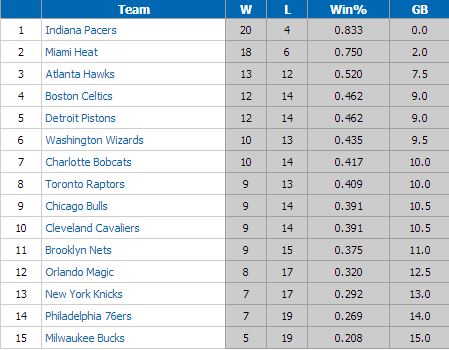 In other words, whoa, it's so open, I mean, can you feel the breeze whipping through the Eastern Conference? Huh? Can you? The Eastern conference is so down, it needs counseling.

It's ripe for taking advantage of the situation. The Hawks have a good, solid, even if unspectacular core of players. If they could package a couple of rotational type talents and bring back someone that could make a deeper (Read: past the second round) run possible this season, it could mean finally breaking through the glass ceiling that has been every single Hawks playoff run since they moved to Atlanta.

This might mean they take on a salary they hadn't counted on when they built this payroll-flexible team, but if it didn't affect the core players (Jeff Teague, Al Horford, Paul Millsap, it could be worth it.

Why they shouldn't buy:

Because....WHAT?!?!?!?! What's the point of beginning the restructuring of this franchise if we're just going to bury ourselves in the same meh morass we just came out of?

There are no game changers being shopped out there right now and, even if there were, they wouldn't be traded to Atlanta for some rotational talent on cap-friendly contracts unless it came packaged with some draft picks, especially in the 2014 draft.

The point is to win a championship, not engage in some maybe-we'd-get-to-and-past-the-second-round chase this season, which would sell off the chance the Hawks could get another core piece through the draft next season.

Why they should stand pat:

Slow and steady wins the race. Ferry has built this particular roster around cap flexibility and obtaining future draft picks, using those picks to select long term projects that could pay off big down the road.

Besides, these Hawks are already third place in this sorry conference without selling off the future, so maybe they can make a run even with these guys. Stand pat, use the cap flexibility in the offseason and continue down the path currently being blazed.

If a team wanted to part with more draft picks for a run of their own using one of the Hawks parts, wouldn't Ferry have to consider this, even if it meant sliding down into the yucky middle of this already unappealing pack of craptastic teams in the conference?

Are the Hawks buyers, sellers or standing patters? Let us know in our poll and in the comments area.