The Atlanta Hawks came up just short in their comeback bid thanks in part to a heady play from Pau Gasol on the final shot.

Share All sharing options for: Hawks vs Lakers: Breaking down Atlanta's final possession

The Atlanta Hawks came back from 21 points down Sunday night but came up just short at the buzzer as Pau Gasol got a piece of Kyle Korver's attempt on the final possession. Here is a closer look at that final possession. 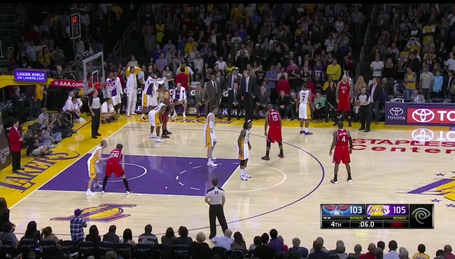 In the play's setup, Pero Antic is the inbounder with Paul Millsap stationed at the top of the key. Al Horford is at the right elbow and Jeff Teague is stationed just inside the three-point line on the right hand side. Kyle Korver is on the opposite block. 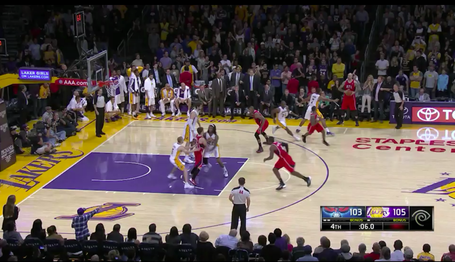 As the play starts, Jeff Teague comes off of a high screen from Al Horford taking his man out of the play. Korver sets a screen on Jordan Hill who is guarding Millsap. There is so much space between Hill and Millsap however there is no lob opportunity for the Hawks. 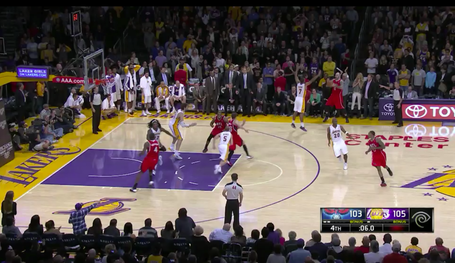 The play further develops with Korver using Horford's screen to free himself. Teague flairs out to the opposite wing and Millsap takes up residence on the weakside block. Korver is clearly the No. 1 option in this play and rightfully so considering he was 8-for-9 at that point and 6-for-6 from downtown. The problem here is the Lakers and more specifically Pau Gasol know this as well. 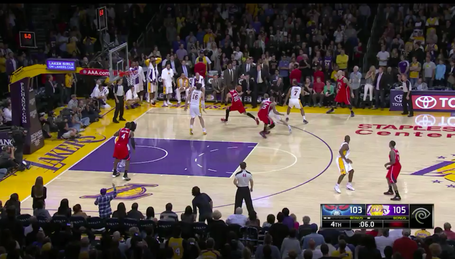 Gasol clearly recognizes the situation and has moved way off of the screener Al Horford and is in help position. Steve Blake continues to chase Korver around Horford's pick. 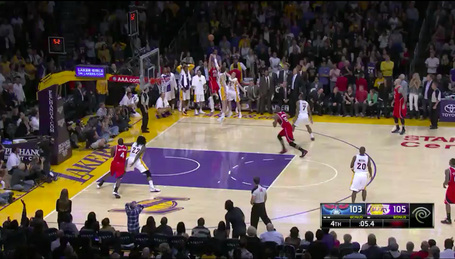 Korver ends up taking the contested shot due to Gasol's presence. As you can see Horford is wide open for either a jumper or a drive which would have likely opened up Millsap. Xavier Henry must respect Antic at the top and is unable to help on Horford. If Henry had switched down to take Horford it would have left Antic wide open at the top for a potential game winner.

Not a bad play design but a missed opportunity by the Hawks. Blake continuing to chase Korver despite Gasol's help put the strain on the Lakers defense but Korver failed to recognize. If Gasol doesn't sniff this out there is no way that Blake can recover quick enough to prevent Korver from getting the shot off.