The Atlanta Hawks will be without Kyle Korver, Lou Williams and Shelvin Mack on Wednesday and will need rookie Dennis Schröder and second-year guard John Jenkins to help pick up the slack.

Over an 82-game regular season it's typical for some players to shuffle in and out of NBA rotations. Sometimes a coach gives them the opportunity and sometimes injuries dictate such a move. Because of injuries to Kyle Korver and Shelvin Mack, John Jenkins and Dennis Schröder have an opportunity Wednesday night to show that they deserve more playing time.

Schröder began the season as the team's backup point guard but has disappeared from the rotation in favor of Mack. Schröder has appeared in 10 games and is averaging 3.5 points, 2.2 assists and 1.4 turnovers. He is shooting 35 percent from the field and 60 percent from the free throw line. 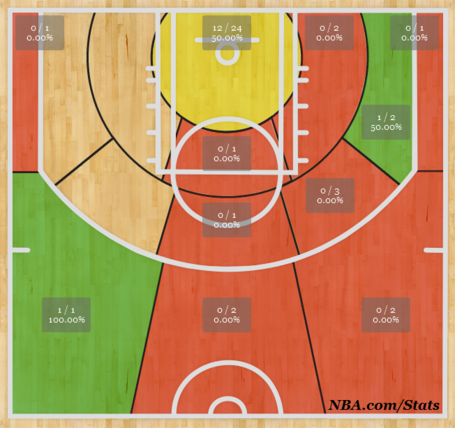 As you can see from his shot chart, Schröder has struggled to finish at the rim and has been at times careless with the basketball. However, it's his defensive performance that likely has him out of the rotation. According to NBA.com's stats profile, Schröder's defensive rating of 107.6 is fourth worst on the team, counting Jared Cunningham who has only appeared in one game.

Schröder figures to see some time at the point with Mack out due to an ankle injury. Will be interesting to see how he performs after being on the bench for over a week. The Hawks could use his speed and athleticism but only if he has improved his control at both ends of the floor.

Jenkins' situation is a lot different from Schröder's in that he hasn't been a regular in the rotation and has spent a few nights on the inactive list. Jenkins' back injury during the preseason put him behind and he has been playing catch-up ever since.

He's played sporadically in six games this season and is just 1-8 from three-point range in those limited opportunities. His long distance shooting is his calling card and if he is not doing that well, then there is little gain from having him on the court.

The Hawks would be well served for Jenkins to find his stroke especially with the up and down play of Cartier Martin. Often Martin has been a spark off the bench but other times he has been rather dreadful. Martin is averaging 7.3 points per game but is shooting just 37 percent from the field. He hasn't scored in double figures in over a week so there is an opportunity for Jenkins, especially if Korver's injury lingers into the weekend.