The Atlanta Hawks hosted their first regular season game of the 2013-14 season and it was glorious.

Admit it. As the Atlanta Hawks hosted their first home game before heading out for a quick three-game roadie, you worried a bit about embarking on that trip winless.

The thought of the Mike Budenholzer era in Atlanta starting at 0-2 isn't a death sentence, but it sure would have been a little bit of a buzzkill for all the interest around him and this team starting the season.

As it was, the team came together and pulled away in the second quarter and held on late for the 102-95 win, sending the Hawks to .500 (1-1) and off to the West with a shiny new win in their pockets.

The team is appreciably different with Al, Teague and Al and Teague on the court

According to the NBA Stats Game Lineups, the duo played 32 minutes together, netting a +22 while on the floor at the same time, matching what the eye saw Friday night, where the Hawks wouldn't be impotent, rather, simply missing the aggressive spark Teague has been thus far and the steady offensive efficiency and variety that Horford brings.

Love a healthy Horford, as it was good to see Al darting to the basket and being crisp and decisive on his jump shot. He promised to be more aggressive offensively and he did shoot twice more than in Dallas Wednesday, but I thought it was the right amount. I didn't see him defer from shots he should take nor force ones he shouldn't have in the name of aggression.

Teague has been nearly the best form of himself in the two game sample size that has been the regular season thus far. Aggressive, attacking, decisive, playmaking -- all terms that could accurately depict the newly signed Hawks point guard.

His 4-13 shooting wasn't awesome, but shooting 8-9 from the free throw line is terrific as he was rewarded for his attacking the lane with uncontested points.

More impressive was his 12 assists to a single turnover for the game -- a large part of why his lineups were so effective. His defense was, eh, we'll address that on another day.

Is there a better feeling than knowing that the Hot Kyle Korver is in the house and anything he fires up is heading in the basket? HKK was present and accounted for, knocking down five of eight three point shots for 17 points to go with his four rebounds, three assists and three steals.

Motion of the Ocean

It's so nice to watch this offense. The ball is, for a super-majority of the time, unsticky on the floor, constantly moving from side to side, leading to a usually good shot.

This manifested itself wonderfully in a triangle-like passing sequence where the passing went from Dennis Schröder to Mike Scott to Korver to Paul Millsap, who tossed a perfectly placed bounce pass to a cutting Scott, who laid it in to cap off one of best bits of ball movement for the night.

I officially nominate DeRozan as a Hawk Hater. In his last six games against the Hawks, DeRozan has averaged 23.8 points on 54/99 shooting, a sizzling 55 percent. Now, how much he gives back on defense may negate this -- but for Hawk Hater status, you need only exceed your usual offensive output to qualify, and DeRozan, who doesn't do near as well otherwise, certainly qualifies.

He even got into it with the sideline fans, telling one to "Shut Up" at least twice before driving in and scoring once again. As the Stinger would say, "Indeed."

As hot as DeRozan was, Gay was most certainly not, shooting a wild 6-23. No sequence best defined Gay's night than being down eight with 2:20 to go, Gay drove to the basket, got free, and then subsequently got jammed by the rim on a dunk attempt. 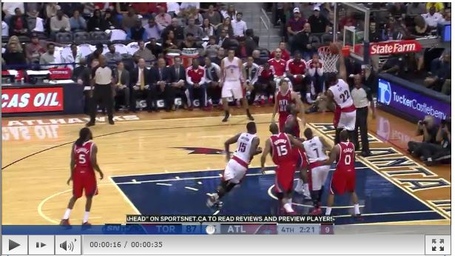