Some last thoughts on a disappointing but not too awful conclusion to the game Wednesday night.

So the Atlanta Hawks got behind, aggressively fought back, then almost inexplicably lost control of the game to the New York Knicks and their legion of almost-fans in Philips Arena Wednesday night. Oh, in front of the usual national TV audience as well. Glorious.

By itself, not a killer, but extremely disappointing, but let's get to the bullets, anyway.

This was an early true test of if things have changed already under Coach Bud.

For the last 549 years, if the Hawks played on national TV, it was a debacle of the surreal kind. Charles Barkley laughing, fans hiding and the Hawks look as lackluster as 100 grandparents on Valium.

Could Bud change that with his nifty, Top-10 paced team? Almost, but losing it at the end was too familiar to long time Bird Watchers and it may take time to trust this formula will change. 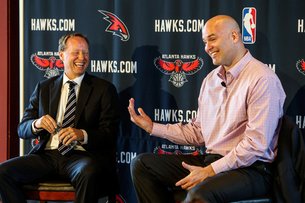 The Atlanta Hawks have announced Peachtree Hoops Appreciation Night December 20th. Find out how to get to the game and feel the appreciation!

I mean, Andrea Bargnani, come on, man. How many banked, contested, long range shots did the Knicks toss into the ocean that was their basket? If I weren't so sick of the Knicks fans who don't know squat other than Carmelo Anthony in the arena last night, I might have hurled into a Dixie Cup about all that crap.

Instead, I'll dust off my Jason Terry Memorial Cap and tip it to the Knicks, who will most assuredly go back to bricking those threes against the Rockets Thursday night.

Say, when the team has worked its way back into the game and taken control by being unstoppable in a pick and roll with your best two players, maybe that's not the time to jack up a three point shot, (Insert rotational player off the bench here).

Shumpert was all over the place defensively. I haven't watched the game again because, well, I wanted to not have an upset stomach. It looked as if Shumpert was everywhere defensively and, specifically, all over Kyle Korver and, at the end, Jeff Teague.

The Teague shutdown was important because it derailed the thing the Hawks were doing best, which was getting Teague the ball and letting he and Al Horford crush the Knicks. Without the ball being able to consistently get to Teague, things came off the rails.

The Teague thing may not have been a big deal if not for the b-rutal game Dennis Schröder turned in against New York. Four turnovers in eight minutes and looking completely out of sorts meant that Coach Bud couldn't trust him on the floor in the fourth quarter when the Hawks could have used a second point guard on the floor and Teague getting locked down by Shump.

It was a night that it would have been nice to have Lou Williams around to help Teague out. Dennis will get better, it was just one of the those rookie nights, but it was painful to watch those eight minutes and it would have really helped if he had been able to positively contribute.

The shot wasn't quite there, which hurt that he couldn't consistently burn the Knicks when they doubled the post immediately, but no matter, he carved Ray Felton into the tasty Thanksgiving turkey time and time again, to the tune of a 25 and eight game.

If Felton was the turkey, then Bargnani was the ham, as he was completely lost defensively on Horford. At one point, I thought Teague was going to start giggling with that pick/roll with Horford. And when Al showed his usual money 18-footer and then blew by Bargs for a slam, there was nothing left for Andrea to do. Wait, except for bank in a late game three pointer. Gross. Let's move on.

Horford mighta, coulda had 20+ shots against the Knicks, scored 40+ points and the Hawks might've cruised. Alas, they didn't go that route, and they didn't cruise. Instead, Al merely dominated for his 14 shots, getting 23 points out of it. Maybe more next time he's rolling, that's all I'm saying.

More: Did Kyle make a three? Check out the Kyle Korver Streak Tracker!

There was some decent stumbling over Pero Antic's name, and Hubie Brown kept saying Mill-Sop, instead of Mill-Sap, but it wasn't the same as the sheer comedy of hearing him trip all over Zaza Pachulia's name. Oh well.

One thing I did note: When calling our games in previous years, Brown's tone was loving toward the Hawks, but almost like he was coaching/nudging the team to do more things the "right way." Against the Knicks, Brown raved about the offense, its movement and the results, especially inside, with no mention of doing something different as in the past.

He also couldn't say enough about Teague and Al -- though I wish he'd had more opportunities to do so.

Despite Brown's love and affection, it actually seemed like the offense stalled more than so far this season. More holding, less movement. Kyle Korver standing still. It was a bit weird, for sure.

Credit to that should go to Mike  "The #$%^ Works!" Woodson, whose switch-a-roo, double-the-post-instantly, Shumpert everywhere defensive approach caused the Hawks to slow down and play the Knicks tempo, especially for the last half of the fourth quarter, even after it looked like the Hawks had taken control.

The result was the first game under 100 points for the Hawks, a disappointing loss despite great games from the best two players on the team and a ton of "Knicks" fans leaving Philips Arena with yet another win under their belt there.

As I said, Gross.