A quick rundown of notebook thoughts while noticing how much the Charlotte Bobcats reminds of the early 00's Atlanta Hawks teams.

Watching the Atlanta Hawks go into Charlotte and take out the Bobcats, again, reminds of how far the Atlanta Hawks franchise has come in 10 years and how they've certainly moved forward since the arrival of Danny Ferry and, now, head coach Mike Budenholzer.

As Drew tweeted this morning: There is no greater compliment than to know that you are the more efficient, more in control team that is going to eventually take control of the game and take advantage of the less competent team's mistakes to seal the game.
I feel my preseason prediction for wins might be low, given the large amount of smart players on the floor, the improved rotational philosophy and that the team has come together faster than I would have anticipated under new leadership. It's a fun team to watch and provides the security of a long-lost blanket.
Jeff Teague had two fouls before the echo of the opening tip had faded. Dennis Schröder followed soon with the same and suddenly the Hawks were down to third-string Shelvin Mack with 8:20 left in the first quarter. What might have derailed the team for the opening quarter and buried them in a deep hole was made alright by Mack knocking down a couple of threes from Al Horford kickouts.
Our Kyle Korver Streak Tracker has the update, but this is a fantastic streak that has now only one peer, Dana Barros' 89 gamer. Expect this streak to get more national attention when the Hawks play against the Knicks on national TV on Wednesday night.
No other way to say it, Horford has indeed stepped up as a pivotal part of this team's offense and the team loses efficiency when they ball doesn't go through Horford regularly. The only downside to Al last night in his 9-15, 24 point effort was that they were calling his footwork really close last night, leading to a number of travelling calls. Six of seven from the free throw line was a nice relief. 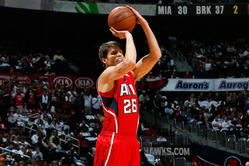 Peachtree Hoops is the only place to track Korver's chase for the all-time 3-point shooting streak. Check, check, check, check, check, check, check it out!
For as many shooter as the Hawks have from three point range (coming bullet on that), Mike Scott is not one of them. 0-3 last night from long range and they weren't of the end-of-the-shot-clock variety. One for eight now for the season and maybe he gets this into his game eventually and becomes a more fully featured stretch four, but for now he's in "Nooooooo" territory when he loads up the long ball.
Yes, small doses are preferable, I would imagine, at this juncture of Elton's career, but his length, rebounding a touch around the basket are all nice feature of his game and he showed them all last night in Charlotte in a six point, seven rebound relief effort.
Something nice is coming from Jeff Teague -- he is on the attack more often than ever and may be leveling up under the leadership of Budenholzer. Jeff's shot inside wasn't spot-on last night, but his decisiveness is markedly improved and 12 assists can point to that.
Oh, and this trademark move hasn't gone away (yes, it came after he lost track of Zeller, but I'd say he righted it immediately.) Thank you for the footage, NBA Media! (Click the pic to open the full highlight) 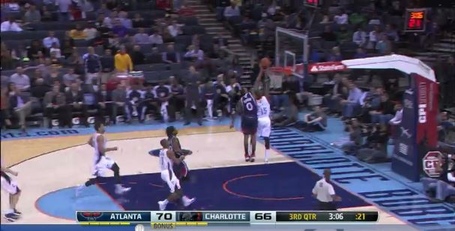 Nice to know that, should Kyle Korver or John Jenkins be off with their shot, that Cartier Martin might be able to go off instead. Cartier got hot with three 3-pointers and helped the Hawks push through to the lead, scoring 16 points on seven shots.

It was also nice to see Jenkins and Korver (and combinations of shooters with Martin, too) on the floor at the same time because, gosh, that's a lot of shooting power. But I was disappointed that the team didn't gash the Bobcats in that alignment, instead saw other non-bombers like Scott shooting threes. Guys, when the shooters are on the floor, gash the D and score, score, score!