The Atlanta Hawks held their annual open practice at Philips Arena on Saturday and gave fans a preview of what to expect from the team this year.

Yesterday at 5:00 PM, the Atlanta Hawks held an open scrimmage available to the general public in Phillips Arena.  So like any other die-hard Hawks fan that is desperately waiting for the season to start, I made my way down I-75 to the Highlight Factory.

After sitting in the stands for what felt a couple hours (in reality 30 minutes) the team came onto the court to begin warm ups and much to my surprise a good amount of Atlanta fans came that came to the event cheered the team on as they took the floor.  While the team was stretching, Steve Holman took the PA system and told us fans in the arena that we would be given a full four quarter scrimmage with three NBA officials calling the action as if it were an actual game.

At the beginning of the scrimmage, we saw that the teams were divided pretty evenly split up with Schröder, Horford and Korver on one side and Teague, Millsap, and Elton Brand on the other.  One surprise that I did see that we may want to keep an eye on is that the former Wake Forest player #13 James Johnson made a start on one of the teams as a Small Forward.  So on top of the predicted Royal Ivey and Shelvin Mack camp battle, we might also want to keep an eye on the possible Damien Wilkins-James Johnson battle. 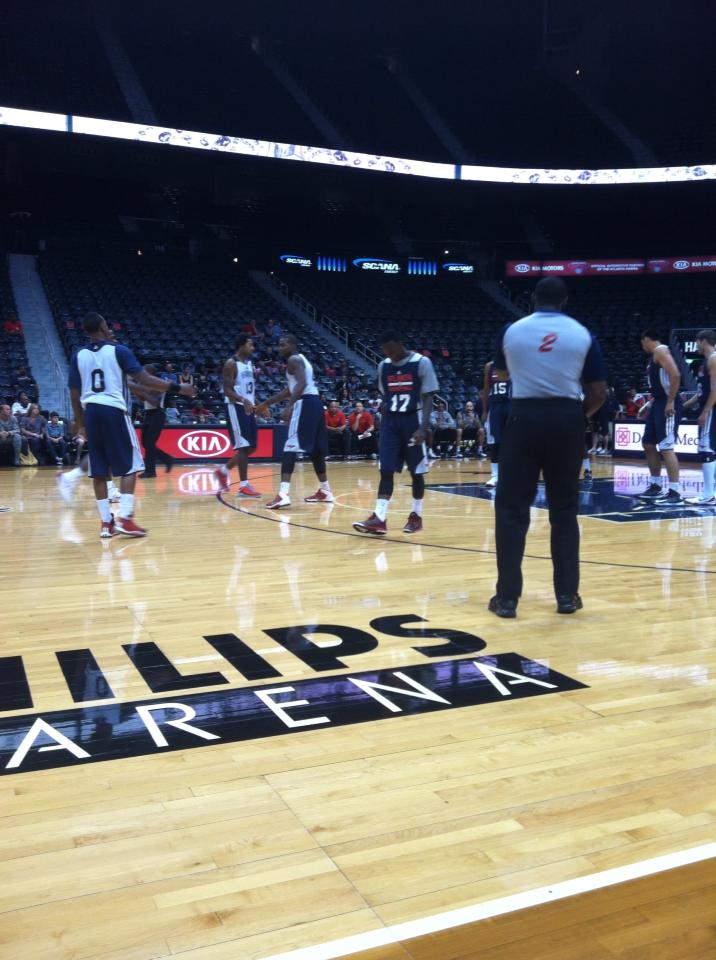 One of the observations that I made is that this team and the Hawks in general made a lot of progress from the Woodson days.  By this I mean there was a lot of ball movement, in fact it seemed that no player outside of the guard held onto the ball for more than two or three seconds.  I know that some on here may not want to hear this but this type of ball movement reminded me of the Spurs, always passing to get the open look.  Many times a player would be open for the shot only to make the pass for an even better option.  So in short, you can tell that this is an unselfish team and like we have heard over and over this is a smart team as well.

I also noticed that the guards were running through a good amount of designed screens for off the ball players, especially for the guards. Teague actually looked like he was giving the effort to get through the screens and Schröder for a rookie was doing a great job chasing Jeff through them.

One of the funnier things that I saw was that the rookies had to go the fans in the front row and thank them for coming to the practice (Yay Schröder and Antic shook my hand) and also you could tell during the warm ups and cone drills who already has a roster spot and who is fighting for a spot.  Teague was jogging through the cones where as James Johnson and Mike Scott were legit working hard on the cones for the agility drills.

But yes Hawks fans you should be very excited for this team. Through this practice I can easily tell that a new culture has been brought to this team just through the scrimmage alone.  Again overall I am impressed what Coach Bud has done to the team in such limited time and I can't wait until we can see this team go up against some real competition or just another team.

Anyway let me know what you guys think, did anyone else go to the practice and have any other observations or did anyone have any specific questions because they missed the practice?