Coming into the game, it was very interesting to see what might be different about this 2013-2014, Mike Budenholzer-led version of the Atlanta Hawks. The result might seem the same – another loss in the state of Texas, but there were definitely something different about this team.

Ok, so 82-0 is out of the question, but there were some interesting items from the game last night, including some philosophical (and basketball) changes.

Starter on the floor

I haven't looked at it officially, but Budenholzer, with the exception of the endgame, always had a starter on the floor, shying away from the full second unit approach we've seen from the Hawks since 2004.

This has long been a criticism of the prior two coaching staffs from the populace and an area where coaches like Doc Rivers always exploited, especially in the playoffs.

Consider this an encouraging development.

We saw multiple players (Mike Scott, Dennis Schröder) getting into imaginary foul trouble and yet they stayed in the game and the earth didn't open up and swallow them. (GASP!)

Too many times we saw Mike Woodson and Larry Drew participate in the phony game of they-might-foul-out-so-let's-get-them-off-the-floor, leading to ridiculous results like Al Horford playing 20 minutes of a playoff game because of early "foul trouble" only to finish with 4 fouls. This practice only served to foul the player out anyway, without the hassle of the full six fouls.

Another tradition of the previous two staffs was the notion of it was all Jeff Teague's fault. Teague was the only player who was openly pulled out of a game for making a mistake, regardless of game context.

Against Dallas, Teague made many mistakes but created more positive plays than negative - and never once had to look over his shoulder to see if the big hook was coming for him.

Point guards bring the ball up

What a concept! Bigs actively looked to get the point guard the ball to bring up the court. Oh yes, there was an occasional DeMarre Carroll bring up, but that was when the PG was already stationed on the other side of the court.

Actual Movement of the Ball

The Hawks had 27 assists and the ball, for the most part, always seemed to be moving. It's like getting Lasik surgery to finally be able to watch basketball with the ball moving.

My favorite ball moving development? The act of pick and roll where Millsap or Carroll actually cut down the lane and the point guard fed them the ball for an easy basket! Basketball!

Early on, the team fed Horford the ball, alas, it wasn't the best game for Al, but the days of him being the rotational assistant and the transition to Al as a primary offensive weapon are finally realized.

Getting to the Line

We'll see if this continues, but the Hawks were 27-35 from the line and it seemed as if two things happened that we're not accustomed to seeing as Bird Watchers: Aggressive attacking of the basket for the whole game and actually getting calls when contact is made.

I don't know what price had to be paid to level the franchise up to actually getting calls on the road, but I am thankful for it.

Monte, Monty, Monta Ellis and Vince Carter are long time Hawk Haters, and they joined with nemesis Dirk Nowitzki to keep the hot plate on the Hawks all night long. They combined for a super-good 28 for 47 from the field, including eight of 14 from three point range to keep the fighting Hawks back during the Mavs home opener.

Their collectively awesome 60 percent shooting paced the Mavs, who only had José Calderón shoot worse than 50 percent for the game, but even he had 11 assists to contribute.

A game where the inside shots weren't falling for Big Al and he wasn't accumulating rebounds, there was still a huge contribution in other areas. Horford filled up the box score with five steals and four blocks, looking every bit the aggressive big man. He also displayed a nice high-low with Paul Millsap on a couple of occasions, which is encouraging in that he and Josh Smith definitely leveraged that to the Hawks' advantage in previous seasons.

Horford looked as if he was more decisive with his back to the basket against the Mavs and even seven-foot Samuel Dalembert, but the shots he took wouldn't go down, especially on the right block. A Robby Kalland Memorial Shot Chart, please: 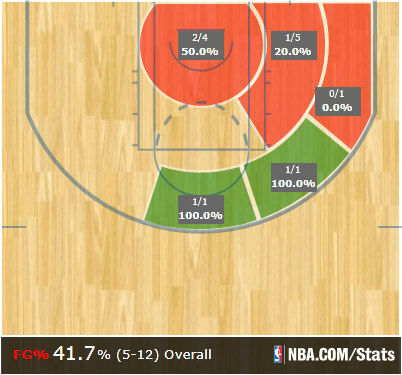 It was seriously in doubt, but Korver stuck home a three late in the game. He struggled early but seemed to get his stroke back on a dead-ball three that went down in the third quarter, but the Mavericks were relentless in limiting his touches. Defenders stayed at home to protect against the Korver three on dribble penetration, which allowed Teague to have a little more room to attack the cup.

We mentioned his ups and downs earlier and while nine assists to six turnovers aren't catastrophic in terms of A:TO, a couple of those came late as the Hawks were trying to fight back the deficit created by the Mavs' hot shooting.

Teague definitely showed more confidence in the attack and even showed growth in transition, despite a bad no-look drop off to Horford that was easily intercepted by Calderón. Still, for a guy who didn't often look to distribute on the break, that was an advance.

Carroll impressed with his overall game and Cartier Martin was lethal when left open from long range, but John Jenkins, DNP-CD.

Nowitzki is a tough match-up and it was interesting that it looked like the Hawks wanted to matchup Millsap, Pero Antic and everybody but Horford on him. Maybe I could be wrong about that, but it seemed that way. Is this how Duncan was managed in San Antonio?