When a fan gets stuck in the middle and not sure where to turn or who to run to....

The Atlanta Hawks in 2013-2014 are simultaneously about change and similarity.

On one hand, there is the absence of an all-time Atlanta Hawk, Josh Smith, a mainstay since his arrival in 2004 and image/face of the franchise. Change.

Then there is the arrival of a new Atlanta Hawks head coach, Mike Budenholzer. Change.

Here now, though, some similarity:

And lastly, the returning youth:

The change has ushered out one efficient front court player for another. It's whisked away one stable, successful regular season head coach for an unproven assistant from a win factory. It simultaneously drafted a point guard for the future while committing long term assets to the point guard of the present.

On one hand, it's exciting to look at the roster and smell the competence. Anybody who has sniffed the odor of lotto-ball with no hope for escape year after year can appreciate the fine aroma of winning. It's better than losing, as a fictional hurler once mused.

On the other hand, there is the unmistakable sensation of status quo in terms of landing zones for the record and eventual playoff destination for this squad. It lacks anyone of First Team All-NBA timber, a usual pedigree of a championship team. It's solid in a way that will best those who are either in full tank/rebuild mode nightly and can upset the supposed top tier anywhere on selective spots on the schedule.

It lends itself to a familiar first round hurdle that may be cleared, but with no blueprint of how the second round caper could be pulled off.

So it's with that contented knowledge/prediction that I can approach the season, wanting to embrace the professionalism that is sure to be the trademark of this club, but in a Mr. Pibb drinking sort of way. Sure, it goes down smooth, and it tastes nice, but it's not the ultimate goal. 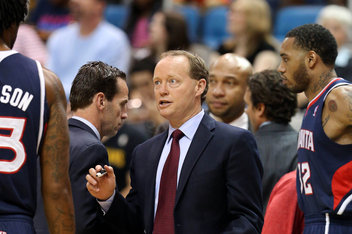 WHAT I AM EXCITED ABOUT THIS SEASON:

Even with a lukewarm vibe on the team, there is still plenty to get cranked up about in 2013-2014. So let's list them out, NERF Dart style!

This is bittersweet as Josh Smith was Atlanta basketball, for better or worse. Still, as efficient as he was, especially on the defensive end, you couldn't help feeling his inefficiency on the offensive end cost the Hawks on more than a hundred occasions.

What will happen defensively? Offensively? Who will run the Hawks' fast breaks now?

Big change not having #5 on the court.

The synchronization between GM and coach can provide great results, as the coach can fully realize the GM's vision on the court, but how long will it take for the team to transform and adopt the new styles? Mike Budenholzer has taken over what has been a fairly static approach since 2004-05, when Mike Woodson/Larry Drew took over. Drew changed some nuances to the offense and the Switch-a-roo defense was scrapped, but Coach Bud's arrival signals a more stark change to what has been practiced for almost a decade.

What, if anything, does the 1-6 preseason tell us about the adoption and preciseness of the team to Coach Bud's approach? What will look different/same and better/worse about the team this season? Great questions to track and watch throughout the season.

Teague was brought back because he was an above average player and was the right price for the position/production he provided. This season and this roster appears to be built in an even more transient manner than last season's, meaning the roster holds some bargains that can be dealt for future assets.

So Teague remains the starter at point guard while first round pick and summer sensation Dennis Schröder waits in the wings. For how long? What will happen if Teague starts slow or the Hawks start losing?

Schröder could make it even harder if he was a dominant personality on the court and the team responded to him, long a problem with Teague, whose personality is sometimes far from the leader that teams wish their starting point guards to be.

Along with shot-blockers, I am a sucker for great shooters, so John Jenkins' development is on this list. The occasions Jenkins was on the floor with Kyle Korver were embarassingly exciting for me, leaving me at times a little too giddy about the floor stretch with two fantastic shooters on the court.

Hopefully Jenkins can just be concerned with being a specialist this year and defense, the "three and d" types that swept through the recognition glass last year.

If the Hawks can boast two high 40'+ percentage three-point shooters in the rotation this year, it'll make the rest of the offense that much more efficient, which I am in favor of.

Having watched Paul Millsap primarily in games against the Hawks, it'll be curious to see the guy who played so solidly in Utah and generated plenty of rave reviews. It'll also be interesting to see how he plays with Al Horford, who got along so famously on the court with Josh Smith.

It might be somewhat of a train wreck with Millsap and Horford, it could be magic, or somewhere in the squishy medicore middle, kind of like finding jelly in the middle of a doughnut when you expected delicious cream.

When he gets hot, it's quite a ride, and you never seem to be too far away from getting back into a game or blowing one open as long as Korver is healthy.

Again, his play and leadership were surprising in terms of both of those characteristics' importance and I doubt that most Hawks fans expected to really want to re-sign Korver before last season started.

And yet... I am glad he's here and will be a part of the the transition to Coach Bud's system. He lends a San Antonio veteran shooter vibe to the mix, sort of like a certain Hawks' GM when he was in San Antonio (No, I am not talking about Pete Babcock).

Hey, remember when the Hawks stole the ultra-efficient Lou Williams and signed him to a very affordable deal to begin to replace the offensive production lost by trading Joe Johnson?

The excitement of Lou coming home to Atlanta has definitely been more than muted due to his ACL injury and subsequent struggle to return from it. Though the All-Star break seems a reasonable target for return, it conjures the feeling of a delayed flight due to maintenance, and the airline keeps pushing back the estimated time of departure to random, round, top of the hour estimates, though they truly have no real idea when the flight will resume or will be cancelled.

Here's praying that the Lou Williams-Atlanta Hawks flight does not get cancelled.

The answer is -- OF COURSE NOT! Still, Zaza's gone, and Ivan is too and there are some serious sized shoes to fill and it's up to the Big Macedonian to fill them.

As stated, the Hawks are financially well-built and very flexible, roster wise. There are very productive pieces, such as Millsap, Teague and the like, that may not necessarily be a part of the next great Hawks roster.

So it's another season of intense rumors, discussions and possibilities. Trade rumors can be pervasive, exciting and then annoying, but the possibilities of what may be are always a big topic of conversation.

Looking at the team and roster, the only path that seems unreasonable to predict is the championship path. It could be same-as-it-ever-was, it could be slightly better or it could absolutely come apart at the seams and become a fire sale of the flexible assets Danny Ferry has compiled thus far.

Still, I believe it'll be an interesting season, the second part of a transition concerto that Danny Ferry began the moment he launched Joe Johnson and Marvin Williams into Hawks history and began to build the future in Atlanta.

Right now, the present is the transition, the second movement which is neither the attention-getter nor the powerful finale that a Mozart piece would provide. Rather, it sets the table for what's to come, which means it's rarely satisfying in and of itself, but is an undeniable part of the entirety.

So I'll enjoy it for that, as I try desperately to peek to what's to come. I'll enjoy the nuances of the now, which will be somewhat more of the same as last season: a pleasant and sometimes fun team that can alternate by an obvious ceiling which will temper the enthusiasm.

I'm good with that.

Prediction: 44 wins, 38 losses, playoff bound and first round out.