The Hawks opened up a 53-38 lead at the half, but one of the worst quarters in recent memory derailed any plans of an Atlanta victory over the hated Celtics.

"This was a very disappointing loss, for me, probably the most disappointing loss of the season. Playing against a team that we have battled in the past, and we've seen this type of scenario before. Where we've played well, and then it starts to get physical and they start making it a little bit rougher and more difficult for us and we don't respond. That was clearly what happened tonight. I can stomach losing, but it's how we lose. The last way you want to lose is for a team to climb up in you and you don't respond, and that was clearly what happened tonight."

That was Larry Drew's opening statement after the game. The normally mild-mannered, reserved Drew was visibly and audibly angry and upset with the performance of his team down the stretch (as he should be). He held no punches and challenged his team's mental toughness. It appeared as though, after so many close calls and games where he has told his team and the media that they need to develop a "killer instinct," tonight's debacle was the final straw that unleashed his frustrations.

The Hawks jumped out on the Celtics early and, thanks in large part to Lou Williams, the Hawks enjoyed a 53-38 lead at the half. Williams had 16 first quarter points and finished the half with 21 as he shot the lights out, going 8-of-9 from the field, including 4-of-5 from three point range (his lone miss was a 30 footer as the shot clock expired). His backcourt partner Jeff Teague also had a great first half, scoring 13 points and had three steals. Teague seemed to take the challenge of guarding Rajon Rondo, and responded well early on to Larry Drew's challenge to be in "attack mode" all night. The Hawks shot 52.5% in the half while limiting the Celtics to shooting just 39%. Atlanta had just seven first half turnovers, allowing just six points off of them, and forced 10 Boston turnovers, turning them into 14 points.

And then the third quarter happened.

Boston came out and got a pair of quick baskets prompting Drew to call timeout in an effort to calm his team down, and for them to refocus and get back to playing the type of basketball that had gotten them a lead of, at one point, 19. That timeout was unsuccessful.

"I called a timeout very early," said Larry Drew. "I saw early that our energy was not up, and they got on a run and we couldn't stop the bleeding. We did not respond after they smacked us. That's what's disappointing about this loss. We're going to come back tomorrow and look at the game, I had planned on giving them the day off tomorrow, but I can't do that. We have to see as a team how we allow ourselves to get in that position, and how we come out the start of the third quarter and play the way we played and how we cannot respond."

The Hawks shot a terrible (actually, more properly, "Turrible" in the words of Charles Barkley) 2-of-14 (14.3%) from the field in the third quarter and scored nine points. The only two makes came from three where the Hawks jacked up nine long-range attempts to just five shots from two-point range. The Hawks only had three attempts anywhere near the basket (missing all three), and completely discarded the type of offense that had been successful in the first half. 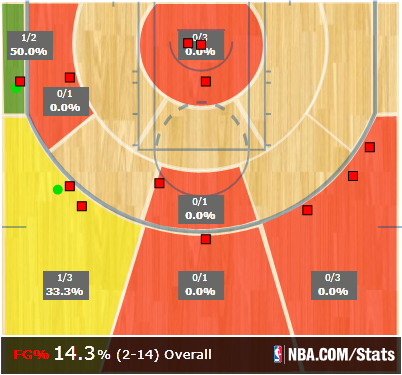 "The last thing you want to do [when up big] is slow down, and we did not start the third quarter with the same aggressive attack offensively that we did in the first half and you could sense it. Once you sense it you move in for the kill, and that's what Boston did. That's what happens. You start pressing. You go individual and start trying to get the team out of the rut. You stop moving the ball and then you stop moving your bodies, and that's clearly what happened. I know this team is capable of pushing through that, but we just have to get mentally stronger to do that."

Josh discussed the defensive pressure breaking their rhythm offensively, especially on the pick-and-rolls, and that they could have attacked them differently.

"They got up in us defensively and got us out of our sets and we turned the ball over a couple of times and they capitalized on it. [When they started pressuring on the pick-and-rolls] we should've high-lowed it quicker. You know, get it to the opposite big, that was open all day. Their bigs have a tendency to hard show and stay a little too long, and we didn't have the ability to make the timing pass."

Boston stayed the course in the fourth quarter, never allowing Atlanta to cut the lead to fewer than five points. The Hawks continued to shoot poorly, and did not execute their offense in the final 24 minutes of the game. The response by the Hawks to the Celtics run (rather the lack thereof) has Drew a bit concerned.

"I'm concerned because this is the NBA, and you have to expect that. When you play against teams that do smack you, you have to respond, it's just the way it is. When you don't do it, you get labeled, you get a tag on you, and that's the last thing I want to happen to my ballclub. I want us to understand and go out there and know, it's a game of runs, but we have to be mentally strong to be able to handle when a team does go on a run. You can't compound things. You can't start turning the basketball over, you can't have bad shot selection, you can't keep having defensive breakdowns and add more and more problems to the equation."

Josh Smith had 12 points, 10 rebounds, and three blocks, but his negatives out-weighed the positives on this night. He had one of his worst shooting performances of the year, going 4-of-18 (22.2%) from the floor including an inexplicable 1-for-5 from beyond the arc. He also had six turnovers and seemed to be pressing offensively, especially in the second half in an effort to bring the team back into the game.

As seems to be the case after most losses, Josh gave some very different answers than did Drew. When asked about Drew's comments about the team lacking mental toughness he responded.

"Everyone's entitled to their own opinion. Unfortunately, we weren't able to do the things that we did in the first half."

When I asked about the offense breaking down and the team taking too many jumpshots and playing individually (Disclaimer: The fire alarm began going off in the middle of my question so it may have effected the length of the answer, but the sentiment was the same).

Lou Williams led all scorers with 28 points, but had just seven in the second half on 1-of-3 shooting. There were multiple times in the second half where he and Josh were having animated conversations on the floor or in timeouts about how a play should have been run, and he seemed frustrated by the disruption Boston's defense caused on the flow of the Hawks offense.

Lou's lack of a presence in the second half was cause for ridicule towards the coaching staff for not having Lou be the focal point, but much credit has to be given to adjustments made by the Celtics. Boston's guards, mainly Courtney Lee and Rajon Rondo, denied passes to Lou inside or near the three-point line, and forced him to take the ball from further out. They also, as Lou said, pressured the ball more, making it difficult for Jeff to get the Hawks into their sets, which may or may not have been designed for Lou.

Teague had a very rough second half, scoring just four points with two assists and zero steals. Teague's aggressive nature in the first half seemed to have vanished at the half as he was clearly rattled by the constant pressure from the Celtics guards, namely Rondo. Teague was unable to penetrate the defense in order to create any scoring chances for himself or his teammates, and struggled to contain Rondo on the other end.

Paul Pierce came alive in the third quarter to score 17 points, and many came against Kyle Korver, who fouled out in 25 minutes of playing time. Korver, who has been lauded for his defense this season (rightfully so), struggled against the bigger, more physical Pierce, who bullied his way into the lane for whatever shots he wanted. Even when the Hawks put DeShawn Stevenson in on Pierce, Paul was able to find ways to score. Korver has excelled within the team concept and has been a plus-defender for much of the year, but Boston cleared out for Pierce and isolated him on Korver (still his worst attribute is 1-on-1 defending) and allowed Paul to go to work.

Rondo had the "Jason Kidd honorary" triple-double with 14 points, 11 rebounds, and 10 assists (the award for underwhelming triple-doubles), but his defense clearly effected the play of Teague. Jared Sullinger was a monster on the boards and had nine total rebounds, but four huge offensive rebounds. Al was AWOL for much of the night, scoring just six points on 2-of-8 shooting with nine rebounds. Horford struggled shooting and could not find the touch from midrange (naturally after I write about how he's found his touch from midrange.)

Atlanta will not play again until Tuesday when they go to Minnesota to take on the Timberwolves, and they will need to figure out whatever has been bothering them lately against physical opponents as they will be tasked with the extremely gritty Wolves led by the meat grinder Nikola Pekovic. The good news, after the game Anthony Morrow said he expects to be back for that game, which will help out with the Hawks perimeter depth as we await the return of Devin Harris (he too should be back soon, barring a setback).

Midrange Misery Game Report (This is a new segment in which I track the midrange and three point shots of Al and Josh by category: Exciting!):

Celtics vs Hawks: Atlanta suffers 2nd half collapse in 89-81 loss