The Hawks fell behind by as many as 27 and were down 19 at the half, but were able to comeback and force overtime (twice) behind Korver's eight second half three-pointers to get the 123-111 2OT victory.

Share All sharing options for: Hawks comeback against Celtics in 2OT behind Kyle Korver's hot shooting

The Hawks started the game shooting horrifically from the field (4-of-23; 17.4%) and were causing many Hawks fans to have flashbacks to the record-setting bad performance in Chicago. The Hawks were down 29-10 after the first quarter, and all hope seemed to be lost, especially against a Celtics team that has long had their number. I mean, just look at this. 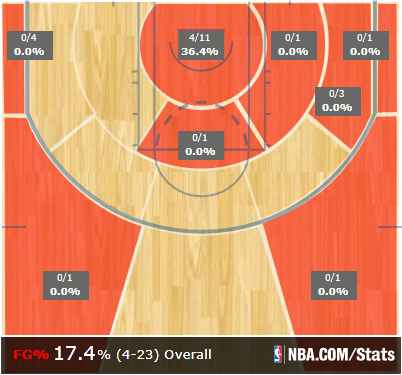 The Hawks had all of your sadness in the first quarter. I don't even know how it's possible to go 4-for-11 inside eight feet, but the Hawks found a way to do it. After that dismal performance that featured at least 10 missed open shots (layups, midrange shots, three-pointers), the Hawks regained their rhythm. They tied the Celtics in the second quarter 28-28, but were still down 57-38 at the half.

Larry Drew said his message at half-time was simple. He said he didn't come out and start yelling and screaming at the guys, or listing off stats because he thought it was "more than that." He told them he wanted them to go out and play with pride, show they're a competitive team, and to have fun. He said, "I wanted my guys to be smiling, be chest-bumping, and high-fiving."

Kyle Korver said, "Coach came in at halftime and said he wasn't sure if we could win, but he wanted us to fight and show some pride. And that's what we did."

Korver put on one of the greatest shooting displays in NBA history in the second half, becoming the sixth player to make eight threes in a half, and was the first Hawk to do so (previous record was seven). Kyle shot 8-for-10 (that's 80% if you couldn't figure it out) from three and had five in the fourth quarter alone. He hit the shot that gave the Hawks an 80-77 lead with just under nine minutes to play, and hit three from the 4:45 mark to the 2:35 mark that cut the Celtics lead from 10 to two. That was the first time since old Joe (like the 2008 playoffs Joe) that the entire building felt that he was going to make everything no matter how good of a contest or how far away from the basket he was. Kyle had all of the hot sauce in the second half and finished the game with 27 points, six boards, four assists, three steals, and two blocks. This is what his shot chart for the second half looks like. 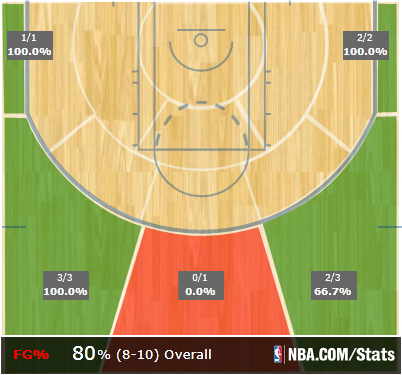 Kyle's reaction to his night. "It was just a good shooting night." How about you just understate that a little more Kyle. "When the ones that don't feel good still go in, it's nice...It was one of those things when you make some shots, you get better screens and you get better passes." Kyle sets records and then ho-hums it. He didn't even humble-brag, he just humble-humbled. Let's see what Al had to say.

"[We were down 10 in the fourth] and then Kyle happened."

Yes indeed, Kyle happened. Not "Kyle made shots, or got hot," Kyle happened. That's how the team sees him. There wasn't any real shock in any of the guys (a little bit of amazement), but that's what they feel he can do at anytime.

For those wondering why we run Kyle out there despite his shortcomings, that's it. The confidence in him from his teammates and the fact that at anytime he can get the sauce flowing.

After the game, Larry Drew talked about how proud he was of the team, how amazing of a comeback it was, and how impressed he was by their resiliency.

"First, I have to say that, as a coach or as a player, this is probably one of the most amazing comebacks I've ever been associated with. The start of the game was just like we couldn't do anything right, we couldn't make shots and they made shots. It seemed like everything we drew up in the first half, we couldn't buy a basket...I played a lot of guys a lot of minutes, and I know they won't be worth a darn [Saturday]. Once we got the energy and a rhythm I didn't want to disrupt it. Going with the small lineup was big for us. At that point it was all about generating energy and generating speed to get us going and it did."

Somewhat lost in Kyle's amazing shooting display was the play of Jeff Teague and Al Horford in the second half. Teague finished with 23 points, seven assists, and three steals before fouling out in the first overtime. Teague had 14 in the first half and was the only player capable of making a shot in the early going. He jump-started the Hawks fast-break offense, especially once Devin came into the game in the third, and did a good job feeding Kyle for those threes (every pass was on time and on point).

Horford shot just 2-of-10 in the first half and couldn't make anything inside or outside. In the second half he made all five of his shot attempts and for the game went 10-for-11 from the free throw line. Al shook off his poor free throw shooting numbers this year and stepped up to knock down clutch free throws down the stretch (clutch, as opposed to Pierce who was cluth). Horford finished with 24 points and 13 rebounds for his 22nd double-double of the year and the Hawks are now 16-6 when he has a double-double.

"Honestly I'd have to say [coming back from] 10 with four minutes to go, you kinda start wondering what's going to happen, and then Kyle happened. He takes over and makes threes. I told the guys it was going to be a different second half of the season, we were going to be better and more competitive and this was the perfect example of that."

"I missed a lot of easy shots at the beginning of the game, and I felt bad about that. I think I was a little off rhythm and in the second half I think we just started running in transition and getting easy baskets and got our confidence up...It feels good [making 10-of-11 from the free throw line. I've always been a good free throw shooter and I think this year when a lot of people start talking you start questioning yourself, and tonight it was my focus just to go up and shoot the ball. I'm just going to shoot it and not think about it."

I asked Al how his leg was feeling after playing 51 minutes and he laughed, "After being doubtful. We were joking about that and I actually feel good surprisingly. It didn't affect me on the floor so that's a good sign, and I got in the cold tub after the game."

The Hawks have now won three straight after losing eight-of-ten earlier in the month. They will play the Knicks in the Garden on Sunday as they look to carry over the emotional high from the end of this game and parlay that into a fourth straight win.