Josh Smith came up with a huge performance in Wednesday's win over the Charlotte Bobcats. Smith finished just two assists shy of a triple-double totaling 30 points, 13 rebounds and eight assists.

Share All sharing options for: Josh Smith shines in win over Bobcats

Josh Smith continued a string of solid performances Wednesday night narrowly missing out on a triple-double in Atlanta's 104-92 win over the Charlotte Bobcats. The timing was perfect for the Hawks who were without both Al Horford and Zaza Pachulia against Charlotte.

Smith went to work inside from the tip scoring 10 of his 30 points in the first quarter. For the game, Smith hit 15-24 attempts to go along with 13 rebounds and eight assists. Smith overpowered the Bobcats inside making 11-14 shots in the paint. 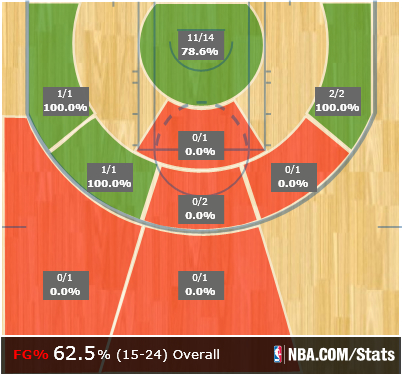 Larry Drew said during his post game scrum that going inside to Smith was a priority and that Smith delivered when called upon.

Smith said going into the game that he wanted to play in control and within the offense. For the most part he certainly looked comfortable particularly in high/low situations with Ivan Johnson late in the game.

Control is a key word and Smith has been in control since his return from a one-game suspension back on January 16. Following that incident, Smith said he was looking for ways to be more efficient and to just play basketball. All of his many talents were on display against the Bobcats.