Why the Hawks should not pursue a Rudy Gay trade

Rudy Gay has been at the center of trade rumors in Memphis for the past few weeks and the Hawks have been named as one of the potential landing spots for the Grizzlies' swingman. While Gay is a talented player, would trading for him really be a good move for the Hawks? I say emphatically, No.

Share All sharing options for: Why the Hawks should not pursue a Rudy Gay trade

The "Rudy Gay to the Atlanta Hawks" talk really took off after Zach Lowe of Grantland placed the Hawks as one of the "sensible candidates" for a trade. In his scenario (you can read his full piece here) Lowe had the Hawks sending Kyle Korver, Devin Harris, and a first-round pick (we have two) to the Grizzlies for Gay and Josh Selby. The initial reaction is to think that it's a pretty good deal. Atlanta would fill a need at small forward, add a productive scorer (Gay has averaged 19 ppg for his career), and the frontcourt trio of Gay, Josh Smith, and Al Horford would be formidable.

However, if we look deeper, we begin to see some flaws in that deal. First, Gay's contract. Gay has two years left on his deal after this season and is scheduled to make 17.9 million in 2013-14 and 19.3 million in 2014-15 (!). That puts a real damper on the Hawks offseason cap flexibility over the next two seasons and would create a very interesting situation with Josh Smith's impeding free agency. Gay's contract is one of the hold-overs from the previous CBA and is heavily backloaded (Gay made 13.6 and 15 in his 1st two years) which makes him a "max player" for the next two seasons. The tag of "max player" has become a topic of discussion within the new CBA as newer restrictions make it a more coveted title (we are having our own dilemma with the "max-ness" of our own Josh Smith, another discussion for another day). In that regard, let's look at whether Gay is worth that max contract.

Offensively, Gay can score, but he is not an efficient scorer. His points per game are down this season (17.9) and he ranks 93rd among all forwards in eFG% at 44.4% and 94th in TS% at 48.5%. To put that in perspective, we frequently criticize Josh Smith for bad shooting but Josh has a 46.6 eFG% and is one spot below Gay with a 47.8 TS%. To get a player to be an offensive weapon that is less efficient than Josh Smith seems counter intuitive. Gay's PER is 14.9 (Friendly reminder that the league average is 15). He's shooting 41.4% from the field, 31.2% from three, and has 0.99 WS/48. Rudy Gay is not the answer to fix our offense, especially over the super-efficient Kyle Korver (60.9 TS%, 59.1 eFG%, and .134 WS/48). Here is visual evidence to his shooting issues from both the midrange (we have enough midrange issues) and from three. 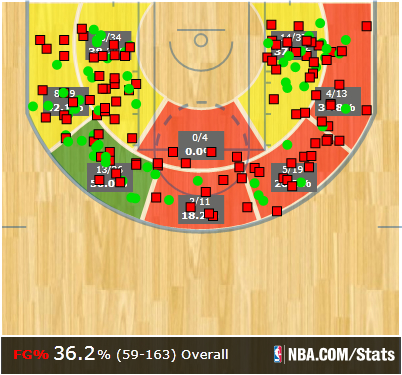 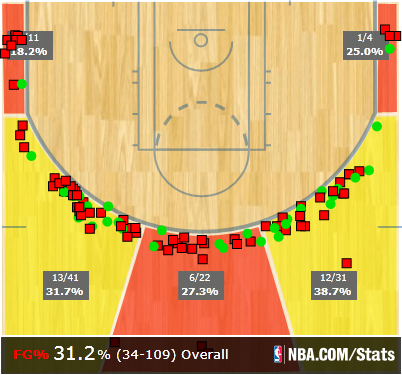 (TROLL ALERT: I'd like to point out that Gay is well behind Danilo Gallinari in almost all offensive/advanced metrics. So if you killed me for suggesting the Gallo trade and you support a trade for Gay, I'd love to hear your arguments of why Gay's a better fit than Gallo because they're wrong.)

Defensively, Gay has been a positive player. Per NBA Stats, Gay has a 97.5 DefRtg and has 2.0 defensive win shares. His defense has been above average, but not great (It doesn't hurt playing in front of Zach Randolph and Marc Gasol). He ranks seventh (one spot behind Smith) in DWS, but looking at his Synergy stats (via MySynergySports), Gay has showed weaknesses. He is 228th in the NBA allowing 0.9 PPP and has struggled against pick-and-roll ball-handlers (0.95 PPP, 157th in NBA) and spot-ups (0.91 PPP, 104th in the NBA). Gay has length and disrupts passing lanes (Opponents have a 10.3 TO%) and keeps opponents to just 39.8% from the field. However, his three-point defense (a big problem for the Hawks) has not been great allowing opponents to shoot 40.4% from beyond the arc.

Gay is a solid player, but his career trajectory raises concerns. Gay has a 25.6 USG% and prefers to operate in isolation sets (17.1% of his offensive possessions are ISO, only behind Spot-Ups at 17.2%). We've had our fun with an isolation oriented, ball-dominating wing player making too much money before and we ended up shipping him off to Brooklyn this year. Why would we bring in another, less efficient version of Joe Johnson less than a year after we traded him away? Per Basketball-Reference, players that show up on his "similarity scores" include: Thaddeus Young (93.1), Keith Van Horn (89.5), Luis Scola (84.7) and Marvin Williams (81.5) (AAAAAHHHHHH!!!!!).

Sorry, but we're going to have to take a pass Memphis.