Josh Smith was trolling from start to finish, but his 29 points, 11 rebounds, and three steals were enough to lead the Hawks to the 102-91 victory over the Pacers in Game 4.

Share All sharing options for: Troll Smoove shows out as the Hawks tie up the series 2-2

The Hawks held serve at home after a 102-91 victory over the Pacers Monday night tied the series up at 2 games a piece. Josh Smith's night was the perfect metaphor for his career in Atlanta as he elicited as many audible "NOOOO!"'s on jumpers and as many exuberant cheers on dunks and steals as he has in any game this season. Smith's stat line reads like the roller coaster of emotion felt by the crowd throughout the night, with plenty of ups and downs. 29 points, 11 rebounds, four assists, and three steals tells part of the story; however the 9-of-20 shooting, 2-of-5 from three, and 9-of-16 from the free throw line tells the rest.

Smith was incredible in the first half, scoring 16 points and grabbing six rebounds on an efficient 6-of-10 shooting (1-of-1 from three) and 3-of-4 from the free throw line. Smith's activity on both ends of the floor was a catalyst for the Hawks' second quarter run that gave them a 57-40 halftime lead. He completely shut Paul George down in the first half limiting him to three points on 20% shooting and just two rebounds. Hawks fans were as high on Josh Smith as could be, so, being Josh, he had to make a rapid heel turn.

Smith's third quarter was filled with misery that was in turn shared by the entire Hawks team. Atlanta scored just 12 points in the third, and went on an 8:30 long field goal drought. Part of the problem was the inability (or refusal) of the Hawks to move the ball. Atlanta was 3-of-20 from the field, helped along by an 0-for-6 quarter from Smith who had all 12 of their free throw attempts in the quarter, making six of them. Here is heel Josh's shot chart from the third quarter. Note the absence of makes, and the ratio of threes to layups. 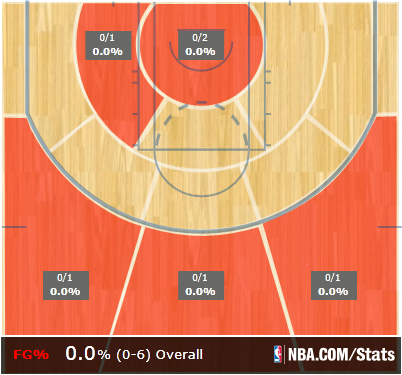 Despite Josh's regression into dreaded "3-point Shawty" mode, the Pacers were only able to chip the Hawks lead down to seven entering the fourth quarter.

In that fourth quarter, Josh, in true trolling fashion, came out and went 3-for-4 from the field including a huge three-pointer (of course) and a fast-break dunk that shut the door on the Pacers come-back efforts. The Hawks allowed the Pacers to cut the fourth quarter lead to 86-81 with six minutes to play before turning it back on and pulling away for the victory. Smith talked about the keys to being able to get a win on the road, and how they turned their offense around in the fourth quarter.

"Energy and effort," said Smith. "If we play with those things and play together, we're a pretty good basketball team. It's not going to always work defensively, but the way we scrambled out of double teams, the way we helped each other out on their dribble drives...that's what it will take for us to compete up there in their arena."

"We had gotten kind of lackadaisical with the pace we were running our offense with [in the third quarter]. We picked up the urgency in the fourth quarter. We set screens, we found the open man, and we were able to get some good looks at the basket."

While Smith got his act together in the fourth, it was the return of Al Horford that gave Atlanta the needed boost to pull away. Horford started strong with six points and four rebounds in the first quarter, but an aggressive Joey Crawford, who seemed hell bent on taking control of the game early, hit him with some early fouls that forced him to sit with two. Horford picked up two more early in the third quarter, which led to him sitting the last nine minutes of the third with four fouls. When Al returned in the fourth, it was clear that he was going to be the aggressor and force the action on the offensive end. Horford had 10 points in the fourth quarter, and went 6-of-8 from the free throw line, hitting his last four to help keep the Pacers at bay. Horford finished the game with 18 points and five rebounds due to the foul trouble, but gave the Hawks the offensive boost they needed.

Kyle Korver was second on the Hawks in scoring with 19 points along with five rebounds. Korver, who has struggled in the series shooting the ball, went 7-of-11 from the field making 5-of-8 from behind the three point line, including a pair of clutch threes in the fourth quarter. Korver, in true Korver style, gave a very simple answer for what the difference was.

"Shots just went in tonight," said Korver. "I got some open looks. We got some offensive rebounds, some kick outs, and it was really nice to get a couple of those. I got a couple two-point shots, which is always nice for a little bit of rhythm. I think I airballed two shots, so that's not good. I either made them or airballed them tonight [laughs]."

Anthony Tolliver played 21 minutes thanks to Horford's foul trouble, and, although he took just three shots on the night, he made them count going 3-of-3 all coming from three-point range. So if you're scoring at home, that's 8-of-11 shooting from the three-point line on the night for the Hawks duo of Creighton Jays (MVC PRIDE!!!).

The Hawks will head to Indiana for Game 5 Wednesday night. Atlanta has to find a way to carry over the energy from these two home games and take it on the road, but it appears as though the big lineup has been the cure for their ailments in the first two games. Defending Paul George seems to keep Josh Smith more invested in the game on both ends of the floor, and if he plays with the energy he has at home, the Hawks have a great chance to come back to Philips Arena with a chance to clinch in Game 6.

However, as always, the Hawks are one of the toughest teams to pin-down, and as soon as you think you have them figured out, they do the opposite. I guess that's what happens when you're led by the Troll King Josh Smith.