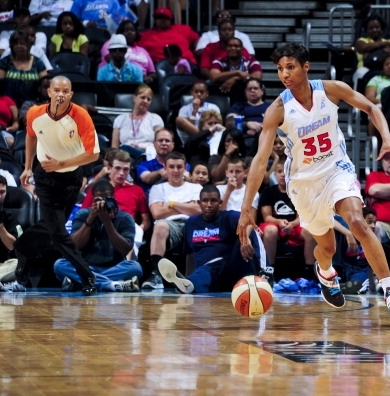 Coming off a tough season opening loss to the Indiana Fever last week, Atlanta would play their first home game of the 2012 campaign against a familiar foe, Cappie Poindexter and the New York Liberty. The Dream had lost their last two regular season match-ups to this team and after starting the year with a loss, they wanted to give their home fans a victory to celebrate. The Atlanta Dream also unveiled their 2011 Eastern Conference Championship banner led by star player Angel Mccoughtry, coach Marynell Meadors and city of Atlanta mayor Kasim Reed. After the pre-game festivities, the Atlanta Dream was ready to get to work and give the 6,802 fans in attendance a win to remember.

In the first quarter, Atlanta jumped out to a fast 8-2 start by getting their fast break offense and also an aggressive defensive game plan which completely confused the New York offense from the start. After the fast start, New York responded with a huge three point shot by Essence Carson and then two free throws from Pienette Pierson to cut Atlanta's lead down to one. After a 7-2 response run from the Liberty, Atlanta got a huge three pointer from Cathrine Kraayeveld to give them a 13-9 and after another small run from New York, Lindsey Harding nailed a huge three pointer to give the Dream a 16-12 lead midway through the first quarter. Coming out of the timeout, New York responded with a few baskets to trim the Atlanta lead back to two points but the Dream defense would respond by applying tough defense which led to three consecutive turnovers and Atlanta capitalized by giving them a 22-16 lead late in the quarter. The run continued and Atlanta would end the quarter on a 10-2 run to give themselves a comfortable 28-18 first quarter lead after the first period. Angel Mccoughtry led the Dream in scoring with eight points and Lindsey Harding also gave her a contribution of 7 points. For the Liberty, Essence Carson, Kia Vaughn, and Pienette Pierson combined for 16 of their 18 points.

At the beginning of the second quarter, the Liberty opened the period with a 7-0 run which trimmed Atlanta's lead to as low as three points. The Dream would respond with their own 9-0 run lead by six points from Lindsey Harding to give Atlanta a 12 point lead before New York would respond to end the run. New York and Atlanta continued to trade baskets and newly acquired guard Laurie Koehn knocked down a huge three-pointer late as Atlanta continued to pressure the Liberty into multiple turnovers and the home team took a 48-33 lead into the locker room at halftime. Angel Mccoughtry lead all scorers with 14 points and continued to receive a huge contribution from Lindsey Harding, who added 13 points as well. New York continued to receive a big lift from Kia Vaughn, who lead their team with ten points. One of the major stories of the first half was Atlanta's defense contained All Star guard Cappie Poindexter from scoring any points in the first half. Atlanta outscored New York 15-6 in fast break points, 16-2 in second chance points, and out-rebounded them 23-12, which included the Dream recording ten offensive rebounds. Atlanta also scored 18 points off 12 New York Liberty turnovers from the first half as well.

At the start of the second half, the Liberty opened the quarter with Cappie Poindexter finally scoring her first basket of the game. Despite the star providing 14 points for her team in the period, their defense completely struggled to contain the explosive offensive attack the Dream threw at them all night long. Atlanta continued trading baskets and applying a strong defensive strategy which kept New York from competing in the first half and the Dream would extend their lead to as much as 16 points in the 3rd period. Atlanta continued to score with New York as they won the quarter 31-25 and the Dream took a 79-58 commanding lead into the fourth quarter, Angel Mccoughtry left the game with 23 points and she also received a big contribution of seven points from forward Sancho Lyttle who was in foul trouble most of the first half and six points from Lindsey Harding.

In the final period, Atlanta would play a majority of their second unit and Tiffany Hayes, the Dream's draft pick this year, would get her first and-one opportunity in Atlanta. The Dream fed off her big offensive play and started a 10-2 run, which pushed their lead to as high as 29 points in the game. New York would respond by adding a 10-2 run of their own; however, the Dream kept scoring baskets which basically nullified their efforts of attempting a comeback. After one final run from the Liberty, Tiffany Hayes and Laurie Koehn would hit two big three pointers late in the period to give Atlanta a 26 point lead and the Dream would earn their first victory of the season 100-74. As for the New York Liberty, the loss drops their team to a stunning 0-4 record to open the WNBA season. The Dream outscored New York in the paint 46-30, 24-6 in second chance points, 26-15 in fast break chances, and shot an amazing 50% at the three point line. The outside shot was one of the new components to the Dream's offensive attack because Atlanta was the worst team in the WNBA last year in three point percentage with a (.261) average.

PLAYERS OF THE GAME:

Mccoughtry continued her dominance against a New York Liberty team who have always struggled to contain the fourth year guard/forward in their match-ups against the Dream in which she averages around 23 points per game. Tonight, Angel Mccoughtry posted (23) points, (7) assists, and (6) steals in tonight's win against New York. Angel was effective on the glass during the game and came up with a few offensive rebounds which led to second chance baskets for Atlanta tonight. When she's providing her team with an overall consistent effort on both sides of the basketball, it gives the Dream the lift that the team needs nightly from her to put themselves in position to win games in this league.

As effective as Mccoughtry was for Atlanta tonight, she received a huge contribution from veteran guard Lindsey Harding who posted (19) points, (3) assists, (2) steals, and (4) rebounds in the victory. When Atlanta can get a strong effort from the guard position such as Lindsey Harding provided for them tonight, opponents will have a tough time trying to contain their offense from producing big numbers. Harding gives the Dream the extra boost from the point guard position that successful WNBA teams will need in order to win games against some of the best teams in the league. Harding continues to assist Angel Mccoughtry by giving the Dream a complete starting lineup that can score multiple points in different ways in any game.

In her first game with the Atlanta Dream since the 2010 WNBA Finals, Leuchanka returned to the form that made her such a key contributor to this team a few years ago. In tonight's win against New York, she registered (10) points, (7) rebounds, (2) steaks and was 100% tonight from the field. In last week's loss against Indiana, the Dream only had the services of Courtney Paris to provide a presence in the paint for them; unfortunately, she didn't have any other dominant force in the paint on the roster that night. Tonight, Leuchanka gave the Dream a presence in the paint and helped the rest of the Atlanta players get good shot opportunities throughout tonight's game and she'll be a huge part of the Dream's success this first half until Erika De Souza returns in August.

In her first home game as a member of the Dream, she provided more depth against New York's starting lineup. Kraayeveld posted (5) points, (2) steals, a rebound, and a clutch three point shot. She was effective and displays the defensive threat that Atlanta will need with the absence of Erika Desouza because Cathrine can play every position on the floor at a consistent rate, which is a huge benefit for Atlanta's offense. She also provides an outside shooting threat which the Dream have lacked over the past few seasons and this is a key component to a successful WNBA team.

In her first home game playing in her hometown of Atlanta, Swanier was impressive as she posted (6) points, (2) assists, a rebound and was 100% from behind the 3 point line in tonight's win over the Liberty. Swanier is a great addition to the Atlanta Dream because she provides another role player at the guard position and her style is similar to Lindsey Harding. She also gives Atlanta another option from three point range, which gives the Dream the major boost they will need in games where they'll compete with teams with a lot of outside jump shooters.

In her first home game of her WNBA career, Hayes looked very promising and could be a future consistent role player for the Atlanta Dream. Hayes posted (8) points, (3) assists, and a rebound. Hayes is another outside shooter and she can also make plays in the paint which continues to provide more depth for Atlanta to have a good amount of consistent scoring options.

Koehn definitely gives Atlanta a huge boost in the three point category. Tonight, Koehn had (9) points and was 3-5 from behind the arc. She's well known for her outside shooting and she can knock down some big long-range shots whenever the Dream needs her to and that will be a major benefit in some of the biggest games throughout the WNBA season. She's one of the best three point shooters in the WNBA and that is a great option to look for whenever the team needs her consistent shooting.

Tonight's game was a clear indicator that the Atlanta Dream have made progression as a basketball team over the off-season and some of the new pieces to their roster provides the depth and solves some issues that kept this basketball team from winning the WNBA Championship last season. Atlanta's next game is on Sunday at 3:00 PM when the Indiana Fever come to Philips Arena. Until next time, LET'S GO DREAM!!!