NBA Playoffs 2012 Celtics vs. Hawks: The Hawks Have No Chance says.....Everybody

Share All sharing options for: NBA Playoffs 2012 Celtics vs. Hawks: The Hawks Have No Chance says.....Everybody

Brought to you by the entire internet comes the crushing "truth" that the Atlanta Hawks have no chance to beat the Boston Celtics in the seven game series that starts Sunday.

This includes folks like John Hollinger, who famously picked the Hawks to finish ninth in the Eastern Conference (that's lottery territory) before the season even started, and that was with Al Horford and Zaza Pachulia.

If the Hawks had two centers, I would pick them to win. If they had one center, I would think very hard about it. But with zero? Yah, that's gonna be a problem. Al Horford is a no-go for this series, and Zaza Pachulia is questionable with a sprained foot, leaving the Hawks likely starting Jason Collins token minutes at the 5 and going long stretches with Josh Smith in the middle.

Hollinger picks the C's in six based on the fact that Kevin Garnett is playing great. And it's true, he is.

But give John credit, at least he knows that Pachulia may not play in this series -- a possibility missed by nearly every other source writing about the series.

Looking further into the Worldwide Leader, there was the list of experts there who sent in their picks: 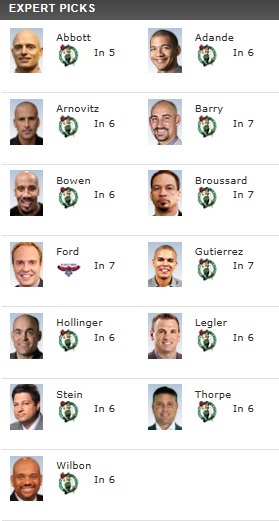 That's an awful lot of green. What does it say that I take refuge in Chad Ford taking sides with the ATL against a green wave of Celtic Fever?

Maybe it's just ESPN, whose AccuScore also predicts pain for the Hawks.

Surely our friends at Hardwood Paroxysm and Yahoo! Sports Ball Don't Lie would have some encouraging words, right?

CBS Sports certainly will have a different take. With Matt Moore, who knows the Hawks very well, along with Ken Berger, Ben Golliver and two more experts, there has to be one other expert who is willing to take the team with home court advantage -- home court advantage!

Five up, five down. No Hawks.

Sports Illustrated put six experts up -- would anyone go what is now against the uber-green grain?

Is there any other expert willing to stand behind the Hawks?

That the Hawks match up well with Boston should matter, as should the extra game at home. I'm not going into the breakdown, because there are always good reasons to pick either team at this stage. It's been easy this season to only focus on the Hawks weaknesses instead of the many things they do well.

I'm going all in on the intangible, irrefutable truth that the Hawks zig when everyone thinks they'll zag. As you can see, everyone sees this as a sure thing for the C's.