The Hawks had to play short-handed with Josh Smith (hip), Anthony Morrow (hip), and Devin Harris (foot) all injured, but they were still able to beat the Pacers at home 109-100 thanks to six players in double figures, and double-doubles from Lou Williams and Zaza Pachulia.

Share All sharing options for: Hawks top Pacers 109-100 behind Lou and Zaza double-doubles

The Hawks were short-handed going up against the streaking Pacers as Josh Smith (hip), Devin Harris (foot), and Anthony Morrow (hip) were all out due to injury. The rest of the Hawks stepped up to the challenge and were able to get a 109-100 home win over the Pacers who came in as winners of four in a row and seven of their last eight. Atlanta fell behind by four early, but charged back to take a 33-26 first quarter lead and never relinquished it. The Hawks had a lead as big as 18 in the third quarter and allowed the Pacers to cut it to as little as four in the fourth, but never panicked and found a way to get the victory.

Lou Williams led the way for the Hawks and recorded his first career double-double with 21 points and 12 assists (a career-high). Williams’ performance was his best this season, and it appears as though he is becoming more comfortable running the offense and finding ways to both score and create for his teammates.

"He’s starting to get a real feel for all the things we run," said Larry Drew. "The thing with Lou is, he’s having to learn two positions and that’s what makes it a little difficult at times. Him really knowing where he’s supposed to be and the timing of things, but he was real comfortable tonight."

Lou attributes his improved play to comfort with his role more-so than having to get to know the system.

"My teammates just made shots tonight. I’ve always played both the one and the two, so it’s nothing new for me. I’m just having to adjust to the minutes. My game preparation has changed since I’m coming out [starting] from the beginning, so that’s been the biggest adjustment for me."

Zaza Pachulia got the start in Smith's absence and was fantastic at both ends of the floor, scoring 17 points, pulling down 14 rebounds, and he limited (2011 All-Star) Roy Hibbert to zero points and one rebound. Pachulia continues his run of solid play when in the starting lineup, and really bolstered the back-end of the Hawks defense and was a big part of the Hawks keeping pace with Indiana on the glass. Zaza did take a shot from Hansborough (a couple times actually) and ended up bleeding a little bit, but it’s all in a night’s work for "Basketball Klitscko."

Four other Hawks scored in double-figures on the night with Al Horford (20 points, 6 rebounds, 6 assists), Jeff Teague (15 points, 6 assists), Kyle Korver (16 points), and, off the bench, John Jenkins (10 points) all putting forth good offensive efforts. The Hawks were extremely efficient, shooting 55% from the field and 50% from the three-point line. Atlanta had 26 assists on 44 made shots as they continue to be one of the best teams in the league at moving the ball and spreading out the scoring. Despite Indiana's length and size, Atlanta matched them on the boards as both teams had 36 rebounds (IND led 11-10 OR).

Al, who has struggled mightily from the field this season, especially his mid-range shots where he came in shooting just 39.1%. Against the Pacers, Al was 10-of-13 from the field, including 6-of-9 from mid-range to pull his season mid-range shooting percentage up to 40.8%. His shot had more arc on it than in recent outings, and he looked more confident in his stroke. Al, who said recently that he watched some tape and found some things he was doing wrong on his free throws, also has been looking at his shooting from the field.

After the game I asked him if he changed anything for this game and he said it was all about being decisive.

"I think at the beginning of the season, I had people really aware that I could shoot that shot so they were closing out on me hard, and it got me to thinking about whether I should be passing the ball or shooting. I think now, I’m getting back to my old rhythm and I’m looking at when I have a shot or have to pass the ball, and when I’m decisive like that to shoot the ball my percentages go really high. For me, it’s just being assertive when I’m going to shoot it just shoot the ball and when I’m not just pass it."

That sort of self-awareness and the ability to look at his own game and diagnose that as his problem is one of the things that makes Al special. There was a lot of frustration from fans and media over his poor shooting early, but no one was more frustrated than Al. He committed himself to figuring out his problem, which I think many of us saw, and not just addressing it verbally, but actually doing something about it in his game. Earlier in the year he seemed hesitant and took a lot of jab steps looking to clear space for a shot that wasn’t always there. Let’s hope this helps him turn the corner and return to his old form from prior to the injury. (Also, let’s hope he finds a way to tell Josh the same thing about passing once he hesitates, I know long shot, but we can always hope.)

Images: First, his mid-range shots for the season. Second, his shot chart against the Pacers. (Improvement!) 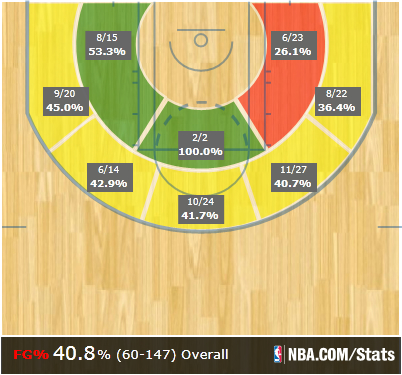 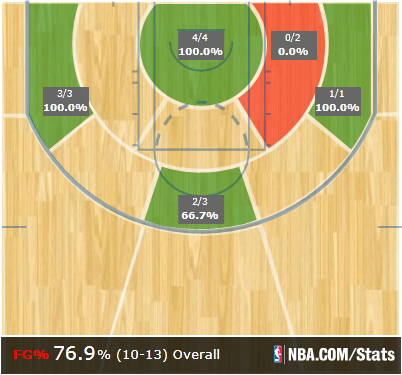 Ivan Johnson returned to the floor after suffering from a stomach virus for the past two days and was back to being Ivan, giving the Hawks great energy off the bench with six points, six rebounds, and three steals in 15 minutes of play before fouling out. The most memorable play of Ivan’s night (and maybe the whole game) was when he wrestled for a rebound with Lance Stephenson and ended up driving Stephenson into the ground, forcing a jump-ball, and somehow not fouling while still delivering quite the hit. It was such an Ivan moment, and now, here’s an Ivan interview.

The full 35 second interview between myself and Ivan Johnson:

Ivan: "Actually, I found out Josh wasn’t going to play when I got in the locker room," (side note: I think we knew about this before Ivan. I’m not sure what the communication protocol is, but it might need to change a bit. Okay, continuing on.) "I mean, I’m always ready, so whenever I get in, I just go do my thang."

Me: "That play with Stephenson where ya’ll were fighting over the ball, what was going through your mind there?"

Magical. He is the best. (That’s not sarcasm either, he legitimately is one of my favorites to talk to. Straight to the point.)

Rookie John Jenkins set a career-high with 10 points and looked extremely confident in his game knocking down 4-of-6 shots including both of his three-point attempts. The coaching staff is starting to trust the rookie, as they have had to play him meaningful minutes due to the injuries in the backcourt, and Jenkins is rewarding them with good offensive production and pretty solid defense (his biggest weakness). His performance made everyone take notice and he showed his growth as a player and his mental fortitude to be ready to play and make the most of his minutes despite limited court time this season.

"John Jenkins coming in [and] playing with that kind of confidence, you know he hasn’t seen much action this year, so I was happy and proud about that," said Horford. "Other guys came in and contributed in different ways, but I especially wanted to highlight John’s job and what he did."

"I think it was understood for me [that I would play] knowing a lot of guys weren’t going to play tonight, so it was my job to be ready and I did a pretty good job I think," said Jenkins. "Just to go out there, even last night, and play a little bit, all of that helps my confidence, especially getting shots and playing well tonight definitely helps that."

His defense looked much improved and he was much better about staying in front of the opposition tonight, something he attributed to picking up on the speed of the game. (He spends a ton of time doing extra work in the gym. I’ve seen him working on his 1-on-1 defense with Devin and others and it’s clearly paying off. Work ethic will get him far.)

"It’s definitely an adjustment from college. Everybody can score and everyone’s so good that, moving my feet and staying in front of my man, I’m doing a lot better job than I was at first."

The victory pushes the Hawks to 19-9 on the year firmly in third place in the East (3 game lead over 4th placed Indiana and Milwaukee), and was especially sweet playing short-handed and banged up off a back-to-back. Atlanta is back on the road next week starting with a Monday night showdown with the Houston Rockets who embarrassed the Hawks at home in the opener behind a monster performance from James Harden.