Prior to Friday night's game, Larry Drew acknowledged Josh Smith's shot selection late in Wednesday's double overtime win over the Detroit Pistons. Drew said he spoke with Smith about it and they were moving on.

A lot could be read into Josh Smith's fourth quarter absence from Friday night's win over the Cleveland Cavaliers. Officially Smith was out of the game with a strained hip flexor but he had struggled with his shot through the first three quarters going just 2-12 for seven points and five turnovers. To his credit he found other ways to impact the game with six rebounds, six assists and five blocked shots.

Smith looked like he was on his way to one of his best games as a professional in Wednesday's double overtime win over the Detroit Pistons. His final line of 31 points, 10 rebounds and six assists looks impressive despite his struggles late. After going inside early and often making 13-17 attempts for 30 points through three quarters. As the game got tight in the fourth quarter Smith found himself on the perimeter and fired up some questionable shots as the Hawks were trying to hold on. He ended up going 0-7 from the field in the fourth quarter and both overtime periods while scoring just one point.

Smith was rather defiant when post game questions turned to shot selection in the fourth quarter and overtimes:

"We took the same shots we had early, they just weren't going down. They were open looks."

Prior to Friday's game, Larry Drew acknowledged Smith's poor shot selection against the Pistons and said that he had talked with Smith and that they were moving on.

"It was just poor shot selection," Drew said. "He knows it. We've already talked about it. That was a game where I thought he probably settled a little too much on the perimeter. He acknowledged it. We look at tape and we talk about it and we just move on."

Friday's shot chart against the Cavs looks eerily similar to what we saw late against the Pistons. Just three of Smith's attempts against Cleveland came from inside the paint. 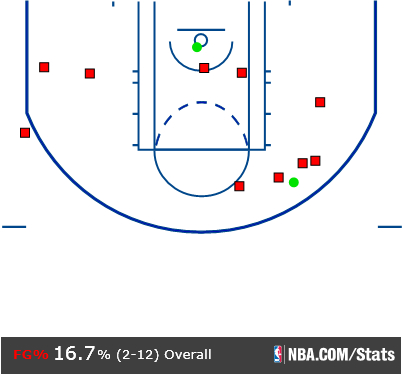