Josh Smith's All-Star candidacy from both sides of the coin was on full display in Atlanta's double overtime victory over the Detroit Pistons.

Share All sharing options for: Josh Smith and the NBA All-Star debate

With the calendar about to flip over to January and the new year the NBA's All-Star game is coming more into focus on the horizon. With it comes the semi-annual Josh Smith debate on whether or not he is deserving of being represented in the game. The talk has already begun with stories being published by the AJC's Chris Vivlamore and NBA.com's Fran Blinebury in the past week.

Josh's all around numbers dictate that he has been at an All-Star level for sometime yet he has been left at the alter each and every year. Both sides of the debate were well represented in last night's double overtime win over the Detroit Pistons.

For three quarters it looked like Smith was going to turn in one of his greatest performances in an Atlanta uniform. His career-high of 38 points was certainly in reach as Atlanta stormed out to a 20+ point lead over the Pistons. Through three quarters Smith was cruising hitting 13-18 field goals for 30 points while also hitting 3-4 from the free throw line. As you can see from the shot chart below, only six of those 18 attempts came from outside the paint. 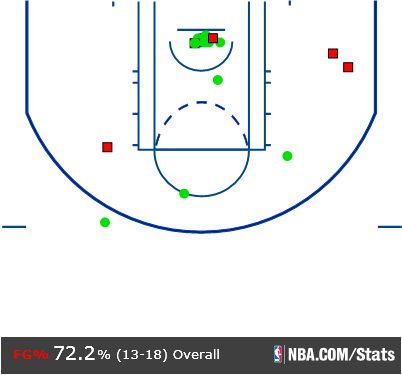 Fast forward to the fourth quarter and overtime and the shot chart looks much different. Granted you can't pin the entire Detroit comeback on Smith. There were issues both offensively and defensively that played a big part but there is a direct correlation to the Hawks struggles and the differences in Smith's shot selection from the first three periods to the final quarter and overtime when just two of his seven attempts came in the paint. 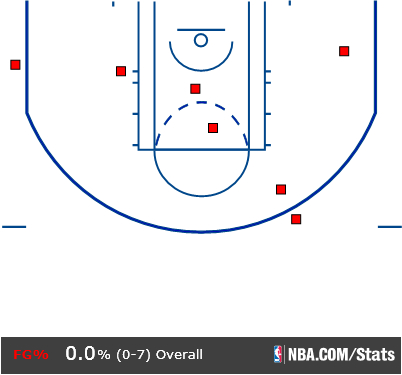 Perhaps the most maddening part of this discussion is Smith's response post game. From Robby's recap:

"We took the same shots we had early, they just weren't going down. They were open looks."

No Josh you didn't get the same shots that you were getting early and that along with some shoddy defense nearly cost the Hawks a win.

So in one basketball game Josh Smith showed why he is capable of performing at an All-Star level and why he has never participated in the game. I'm not suggesting the Hawks are a better team without Smith whose line of 31 points, 10 rebounds and six assists is impressive despite the late struggles. Rather I'm pointing out that his shot selection and decision making still have room for improvement.

With the Hawks performing at a high level this season and with seven-time All-Star selection Joe Johnson moving on to Brooklyn there is a good chance the Smith cracks through and earns his first trip to the All-Star Game. However, for the Hawks to continue to be successful they need to see more of the Smith from the first three quarters of last night's game rather than the one that showed up in the fourth and overtime.