Hawks get double-overtime win over the Pistons 126-119

The Hawks had a 22-point lead early in the fourth, only to see it erased by the Pistons and Will Bynum. The Hawks forced overtime and were finally able to top Detroit in double-overtime behind Jeff Teague, Josh Smith, Al Horford, and Lou Williams.

Share All sharing options for: Hawks get double-overtime win over the Pistons 126-119

The Hawks dominated the first three quarters against the Pistons and took an 81-62 lead into the final quarter. Josh Smith scored all 31 of his points in the first three periods. Atlanta took a big first quarter lead before letting Detroit back in the game in the second quarter. The Hawks hit on all cylinders in the third quarter and seemed primed to cruise to another easy victory.

However, the Pistons, like they did in the second, charged back in the fourth quarter. Despite being down 19 points, Detroit’s guards kept plugging away and followed a red-hot Will Bynum on the come-back trail. The Hawks led all the way until Austin Daye hit a three-pointer with four seconds to play to put the Pistons up 101-100. Horford went to the line with 1.8 seconds to play after faking the hand-off to Kyle Korver, and taking it to the rim. Horford split the free throws and sent the game into overtime.

For Horford, his free throw woes continue and he knows he has to find a way to get his stroke back. Horford was in a similar situation against Washington, but couldn’t hit the clutch free throws at that juncture either.

"It was tough, because I had the opportunity to put the game away. It was important for me to move on to the next phase of the game, and play in overtime. That’s what I did, and we responded well…I know we, especially myself, have to improve from the line."

The first overtime period started like the fourth ended, with Will Bynum getting whatever shot he pleased and pushed the Pistons to a 108-104 advantage. The Hawks were able to get the game tied at 108 and push it to a second overtime where Jeff Teague took over scoring nine points and hit a three that gave the Hawks the lead for good. Kyle Korver hit a dagger three (after going 1-for-10) to give the Hawks a six-point cushion and they would ice it with free throws down the stretch to get the 126-119 victory.

As for that performance in the second overtime compared to that in the fourth quarter, Teague felt like it came from the Hawks getting aggressive again.

"We just started playing. We were playing too cautious [in the fourth quarter]. We had the big lead and we didn’t want to lose the game. We just decided to leave it all out there and just play. I think that benefitted us and got us the win…We took our foot off the pedal and started to relax, but I’m glad we were able to get this win."

Will Bynum caught fire, scoring 26 second half points (15 in the fourth quarter), and was the catalyst for the Pistons comeback. Andre Drummond was big as well, scoring 16 points and grabbing 12 rebounds and the bench scored 85 points, the most in the NBA in a decade. The Pistons out-rebounded the Hawks 62-47 (21-8 OR) and hit an incredible 14-of-27 (51.9%) three-point shots.

Josh Smith finished with 31 points, 10 boards, and six assists, but didn’t score in his final 18 minutes on the court. Al Horford had 22 points and 10 rebounds, but struggled again from the free throw line. Horford and Smith went 8-for-16 from the stripe and accounted for all eight Hawks missed free throws (most of those misses in crunch time).

"Josh had a huge night, not just on the offensive end, but defensively," said Larry Drew. "He really took the challenge, and I think he guarded every position on the floor."

Shot selection continues to be a problem for the Hawks, whether everyone admits it or not.

Drew plainly said it, "Yeah, I told the guys in the huddle before the game that we had to be smart with our shot selection, and I thought we did a good job of it in the first three quarters, but we got away from [what worked] in the fourth quarter."

Horford was more subtle about his displeasure with the shot selection (as he has been many times this year, most notably the number of perimeter shots taken late. "We were a confident team starting the fourth. We had things under control, but I think we got away from what was working." (Atlanta shot 70% inside eight feet, 29.8% outside eight feet) 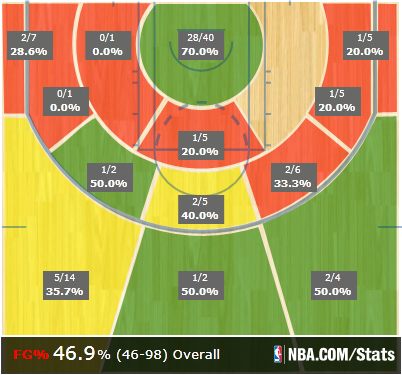 Smoove however, didn’t think the shot selection was a big issue late, stating, "We took the same shots we had early, they just weren’t going down. They were open looks." While they did miss a number of open shots, they weren’t as high percentage of looks as they could have been getting.

The Hawks moved the ball extremely well, assisting on 35 of their 46 made shots and turned the Pistons over 18 times (for 25 points) and had 36 fast-break points to Detroit’s nine. Once again, free throw shooting played a role as the Hawks were 23-of-31 (74.2%) from the stripe, but were able to overcome it. For Atlanta, they’ll take the win, but with a 22-point lead with 11 minutes to play, it was definitely a frustrating way to get what should have been an easy win.