The Atlanta Hawks hope to get back on track Saturday night when they take on the surprising Chicago Bulls at Philips Arena. Atlanta has lost two straight and three of four while the Bulls come in having won two straight.

If you buy something from an SB Nation link, Vox Media may earn a commission. See our ethics statement.

The Atlanta Hawks are searching for answers at both ends of the floor after suffering a 99-80 loss to the Philadelphia 76ers on Friday. That loss left Larry Drew concerned and contemplating a lineup change in an effort to jumpstart his club.

One place Drew could look is to go bigger with Zaza Pachulia in the starting lineup to try and help slow down Chicago's Joakim Noah who is averaging 15.4 points, 12 rebounds and 5.4 assists over his last five games. Pachulia finished with nine points and eight rebounds off the bench for Atlanta in Friday's loss to Philadelphia.

Chicago comes into the game at 15-10 and on top of the NBA's Central Division. They have played without former MVP Derrick Rose who is still out after suffering an ACL tear in the playoffs last season. The Bulls have been winning with defense which is coach Tom Thibodau's calling card. Chicago is holding opponents to just 41 percent shooting this month while the Hawks have been below 40 percent in each of their last three losses. Chicago handed the New York Knicks just their second home loss of the season on Friday.

The Hawks figure to be without guard Devin Harris who did not travel with the team to Philadelphia and is unlikely to play on Saturday. Harris injured his foot in Tuesday's win over Washington and was in a walking boot afterwards. An MRI came back negative but Harris is listed as day-to-day with the injury.

Saturday's game will mark the first matchup between Kyle Korver and his former club. Korver played each of the last two seasons with the Bulls before he was traded to the Hawks during the offseason. The game will also be Kirk Hinrich's return to Atlanta for the first time since he played for the Hawks a season ago. Hinrich turned in his best performance of the season Friday night against the Knicks finishing with 16 points, nine rebounds and eight assists.

Our partner TiqIQ has teamed up with ScoreBig to allow you to "Make an Offer" on Atlanta Hawks Tickets. Offers range from 1-5 Stars, 1 being cheapest. Here’s a breakdown of reccomended offers: 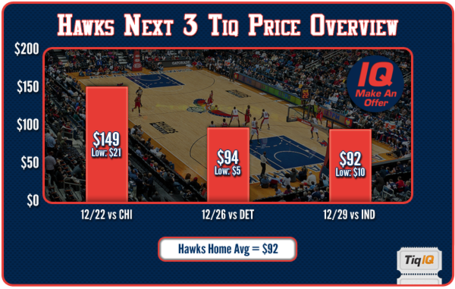