Share All sharing options for: Things That Make You Go Hmmm, Postseason Edition 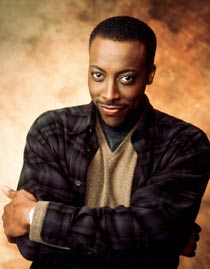 Channeling Arsenio Hall once again...
1. Can the Hawks defend home court?
We have had a problem defending our home court all season going 24-17.  Games 3 and 4 will provide the Hawks the opportunity to show that the season was simply a cat and mouse game where we wanted to give all comers a false sense of security, right?. It also should give some level of confidence to the Magic that the Hawks are not a juggernaut in the Highlight Factory.  What will win out? Cat & mouse vs. road confidence?
2. If Teague/Pachulia/Williams get less PT than Collins/Powell/Armstrong/Thomas, can you consider the postseason a success?
I've talked frequently about how you can win the battle and lose the war.  Well, let's be excited about the fact that the Hawks slayed a little giant in defeating its first legitimate postseason opponent (I don't consider the Heat or Bucks - over the past two seasons - legitimate postseason opponents) and on the road to boot.  Certainly, this is a by any means necessary scenario, but is it really encouraging to see even more de-emphasis of the players you needed to make a 8 legitimate NBA player rotation viable?  Sure, the Collins defense makes sense in limited spurts, but haven't we seen what Powell, Armstrong, and Thomas can do.  And if they were so worthy of doing it - shouldn't there have been other times this season when we should have seen them do it.  Shouldn't we have invested time in giving them roles that could be used during our 44-38 campaign?  My answer is no, but I'm wondering if this is something I should be pondering right now as I watch the guys who I think actually have more to contribute sit on the bench.

3. Will the real Larry Drew stand up?
Is Larry Drew the guy who mixed and matched his way to a Game 1 victory where he pushed all the right buttons (save for a lapse in judgment IMO during Nelson's 3rd quarter explosion) or is he the guy who effectively fouled out this 'best' player for the 2nd quarter of Game 2?  I'm all for following principles and formulas, but the talent difference should highlight to you that some things are worth the risk.  Risking a 3rd foul is worth it if your alternative is Josh Powell or Hilton Armstrong.
Not only that, doesn't it seem like the Hawks are being coached as if they are trying to hang on instead of landing the knockout blow.  The players have come to play...will Larry Drew come to coach?  Are there in-game adjustments to be found?  Game 3 redemption needs to be on the menu...
4. Can Joe Johnson make his contract reasonable in one postseason?
Undoubtedly, the Joe Johnson contract will forever be debated (unless a NBA championship finds its way to Atlanta during the next 4 years), but can Joe Johnson make us forget he got all that money this offseason?  Game 1 - he almost made me think he's worth Al Horford money.  Game 2 - he made me think he's worth Marvin Williams money.  Let's hope for all of his dismissiveness of the Atlanta fans that he's worth Joe Johnson money come Game 3 and 4.  A 30PPG average over these home games could go a long way to shutting the naysayers up...or can it?