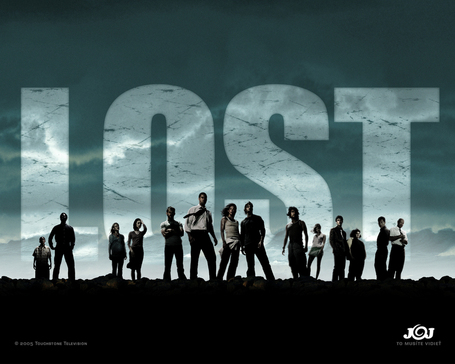 (Ed. Note: I apologize to non-Lost watchers. Actually, I apologize to Lost watcher too. Yet if you watch the show or not, I think you may resonate with the complexities of fandom that will reach a pinnacle this summer. If not, feel free to go back debating Joe Johnson.)

The sports team/player as pop culture reference has been played out. I wish it was not or I would do it all the time. I love thinking that way. Back on my old site (RIP Zaza's Playground), I broke down the Hawks roster through the characters of the Office. Still, in the age of advanced stastistics and detailed anaylsis, this kind of comparison seems a bit cheap.

Yet, watching Lost last night I could not help but think how much that show mirrors my feeling about the Hawks. The ups and downs of emotions. The twists and turns. I admit it. I am confused right now. It is tough to figure out what to root for, which rabbit hole to go down, and name what the real point is. And I am talking about the Hawks here. You see, six seasons in for both Lost and the Hawks and the moment of truth is coming and fans have to figure out how to move forward in a satisfying way.

Our team is in a weird state. We don't know if we want to keep our star. We don't know if we want to keep our coach. We don't know if our present team is under performing or over performing or right on. We don't know how much our past influences our ideas for the future. This team has all sorts of time lines that make them the most confusing team in the NBA. Look at teams that could sign or resign big names this summer. The Kings, Nets, Knicks Wizards, and Timberwolves are rebuilding. Cleveland, Miami, and (to a lesser extent) Chicago know what they want. The Clippers are the only odd ball and that makes so much sense they must know what they are doing. They all have one time line. Hawks fans are different. There are so many more options, factors, and nuances to weigh. All Hawks fans have is a desire for a satisfying ending, and that means they can't cast aside certain time lines as less important than others. Everything is important. Because we don't know where this ship is going.

Who is good? Who is bad? What is the source of our problems? Is the coach the puppeteer pulling strings that players have no control over? Are they stuck in bad schemes that leave them no choice? Or have four quarter isolations and contested jump shot after contested jump shot been freely choosen? There are so many unknowns and despite being so very invested in this team and knowing so much about it, we just do not know how it is going to end.

We keep screaming the most obvious questions and only getting cryptic answers. Why not throw it inside more? Why not run an actual offense? Why play defense the same way, every time, no matter the opponent, even when results are less than great? Why not sit Smokey Woody down and say, and I want answers to these questions now. Is Joe Johnson the savior or the guy who continues to mess things up trying to save? We just don't know what kind of Jack Shepherd he is. It is certainly going to play out. There are only 19 episodes left but are we going to be satisfied with the ending?

Most of us are not fans birthed in the bowels of the playoffs. There was no bandwagon jumping for us. We know all to well that before the recent spurt of success the highlights of the last ten years for this organization were a dunk contest win, a new arena, and a free agent actually coming to Atlanta. These Hawks are reaching a serious fork in the road with difficult decisions, and it is difficult to wrap our heads around because we know these players back stories. We have suffered with them. Would Caron Butler have been a good trade for Marvin Williams? Maybe. Maybe not. But I did not want to do it because I know Marvin. I like Marvin. I am invested in Marvin.

Do we fault Joe for being selfish sometimes? Sure, but he is our selfish. We know how that selfishness has brought us to this point. Do we wish Josh Smith never took a jump shot again? Yea, but we rejoice in how much he has grown as a person. Sawyer is still a jerk, but he is our jerk. He is redeemed into being a likable jerk because we know where he has come from. It makes rooting against Mike Bibby seem a bit out of place. It makes basketball sense to give up hope on our own little Sayid, but we know his back story. We remember his clutch performances. Being a fan is the most bias role in the world because we know every single flashback there is. You cannot have more nuanced judgments than a hardcore fan, but it makes dealing with the present (and even more so the future) all the more perilous.

Knowing so much about the past can make it hard to move on. Why leave the Joe Johnson/Mike Woodson island if you were paralyzed in the NBA wheel chair before they joined forces? The knowledge of realized hope can be crippling. And yet knowing so much tends to lead to looking far beyond the small picture of memory. There was a love triangle (or square if you want to shout out to Juliet) on Lost between Sawyer, Jack, and Kate. That does not even matter anymore. It is bigger picture time now, yet it is there. Those relationships exist. Would getting rid of Joe Johnson be the best move this summer for the big picture? Maybe. But sometimes we just want to deal with the smaller relationships we have invested in.

The sideways flash is new this year for Hawks fans. It is seeing glimpses of something totally different. Elite team performances. Is this real? Is this what could be? Is this what is? It is tough to say, but all the unknowns, all the inconsistency with what we have seen the last six years makes it a frustrating experience. The Hawks go out and beat some of the best teams in the league, they dismantle weaker teams with a new found confidence, and then they lose to the Warriors and Knicks.

Hawks fans want join this show, but we keep coming back to the present (or is it the past or hell is it the future) way too often. We need answers and all we get is glimpses.These flash forwards have not been grounded in anything real. So it is hard to make fan decisions based on something we don't understand.

The ol' summer of 2010 conudrum. Yea, it is exciting to think about. All the possibilities. And there are two firm camps in place. One that screams "We have to go back," to days of Joe Johnson as the alpha dog and other that want a new future in the unknown world of front court leadership. Sure, Josh Smith and Al Horford leading the way is a new baby to deal with, one that has not been part of the Hawks family. Yet does that make it less right and true? (Holy pushing the analogy too far.)

These flash forwards are so ever present they seem to literally be the present. Does this season's time line even matter? Not really. Not for any team but the winner. So if the future is the present and the present is meaningless why would we want to go back to the past. Did I just hurt your brain? Well, that is how I feel as a Hawks fan. There is something good going on with this team. There is real growth toward something. The question is will these timelines reconcile with each other. When the show ends, how do we say "this is it' with this team? Are we suppose to?