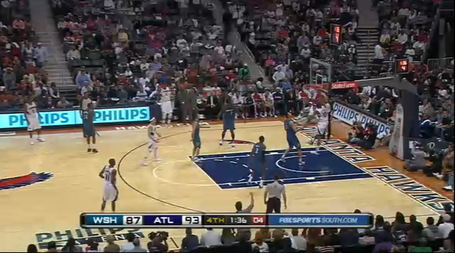 Before we dive too deep into the recap I want to jump ahead to the fourth quarter with the Hawks clinging to a six point lead and needing a bucket. In this situation the Hawks went with a set play that had Josh Smith throw a pin point lob pass to Al Horford for the jam.

Our main man Sebastian Pruiti of NBA Playbook.com has done an excellent job of breaking down this play from start to finish so be sure and check it out.

Recap 3-0 version after the jump

One of the big challenges for this Hawks team the entire season is going to be how to deal with quick point guards. John Wall may in fact become the gold standard when it comes to quick point guards in this league. Predictably the Hawks struggled to contain the rookie point guard as Wall carved the Hawks up for 28 points and 9 assists. However, other than Al Thornton, the Hawks did a nice job of controlling the rest of the Wizards and came up with a great bench contribution before Joe Johnson sealed this win late. The Hawks couldn't match the Wizards 50% shooting from the field but got to the charity stripe nine more times than the Wizards and actually made eleven more free throws which proved to provide the winning margin.

Final Thoughts:
The Wizards during that 27-18 first quarter threw a lot of zone defense at the Hawks which in turn pretty much negates the motion offense. Combine that with the Wizards length inside and that leads to a lot of jump shots for the birds. In fact JaVale Mcgee had seven blocked shots by himself but compounded that with five turnovers for the night. To summarize we expected the Hawks to win because a) they were at home and b) it was the Wizards whom they have had their number over the last several years (take that Chris Sheridan). 3-0 to start the first week feels pretty good.
What say you Hawks Fans? How does 3-0 feel to you?