Share All sharing options for: The unintentional comedy nominations of the Hawks first half of the season 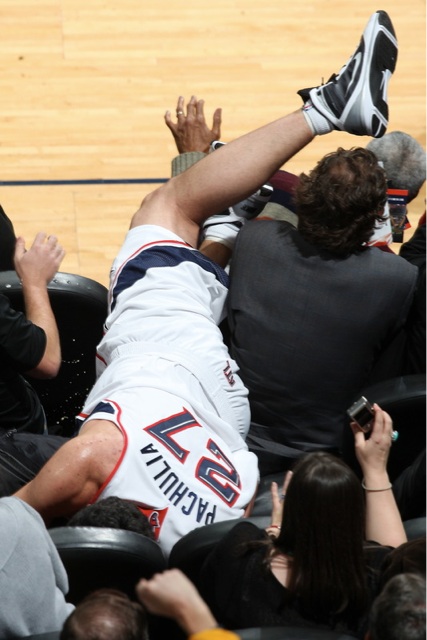 82 games is a long season. It can get monotonous and insular. I once ended an argument with a co-worker by screaming, "Al HORFORD NEEDS MORE SHOTS!"

Of course, no one wants this. We want to be good fans, educated fans, understanding our teams strengths and weaknesses, but we should not do that at the expense of the joys of the game. Luckily, we have things like Josh Smith blocks that lead to Josh Smith dunks, Jamal Crawford four point plays, and Zaza Pachulia exerting effort to remind us why we love the game.

Still, it is good to keep it fresh so that we can remember how incredible each of these 82 games is. How intricate and dynamic the skill, the strategy, the give and take, and all that good stuff really is.

One way I like to do this is by stepping away from my mental notes on why Mike Woodson is blowing a certain game we are winning by ten and just enjoying the peripheral action of the game. Mostly, because it is usually hilarious. Whether at the game getting a wider view or watching on TV with Nique and seeing something in slowmo, there are eight things a game that can make you laugh out loud. So I introduce to you the official nominating thread of unintentional comedy through the first half of the season 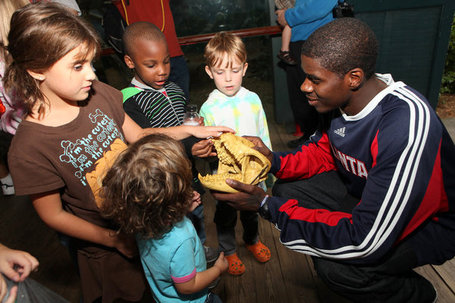 I was reminded of this last night in the fourth quarter when the Bobcats were going on their last mini-run. Josh Smith pulled down a rebound and was called for a foul in the process. By way of the replay, in no way did it look like Josh fouled him and the player (Boris Diaw I think) did not flop to put the play in question. The ref just made a bad call.

As we all know, Josh Smith does not like good calls that go against him. So a bad call in the midst of a mini collapse is going to go over about as well as if you tell him you don't like trout sandwiches.

Josh approached the official irate. Said some things a long the lines of "Why don't you call that foul on the other end." And "I don't like you." A technical foul would have cut the lead to single digits, and Josh was headed toward one, but the ref serendipitously took his position next to Coach Woodson and that allowed the coach to say quite even toned to Josh "calm down."

And that killed me. It was like using reason on a drunk bear.

Mike Woodson has coached Josh Smith for five and half season. Probably longer than anyone else. Routinely Josh has shown a propensity to throw rational, adult decision making to the wind in favor of a trip to crazy town via the Pouty Express. "Calm down" coach said, and you know what, the drunk bear listened.

I laughed about this out loud exactly 30 minutes ago, 18 hours after the game ended.

What is your unintentional comedy moment of the first half? Nominate in the comments. I know I have others. Rec the ones you like. Winner gets a trout sandwich.