72 reasons to be excited about the Atlanta Hawks: #31 Marvin Williams' ball handling

Share All sharing options for: 72 reasons to be excited about the Atlanta Hawks: #31 Marvin Williams' ball handling 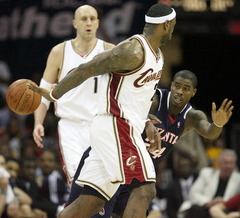 Every year Marvin Williams decides to work on one part of his game in the summer. He has worked to be consistent with the mid-range jumper. Marv drilled the jump hook in the lane. He added the three point shot last year. Williams never comes back exceptional at these things, but he always comes back noticeably better.

This summer Marv and his mustache have been focusing on ball handling. It makes sense. I gave him a rookie nickname of "lobster claws." His control of the basketball hinders his ability to push the pace off a rebound or the receiver of the second pass on the break. It does not allow him to take advantage of his strength and speed off the dribble in the half court. Every year, we keep hoping for Marvin to break into that second pick potential and every year we just end up with a better player.

It is a subtle improvement, but one day we might, on our third or fourth beer when we are a little more honest, look over at our buddy and say, "When did Marvin become a really good player?"