Who is Courtney Sims? A journey into the Hawks, the D-league, and the last roster spot.

Share All sharing options for: Who is Courtney Sims? A journey into the Hawks, the D-league, and the last roster spot. 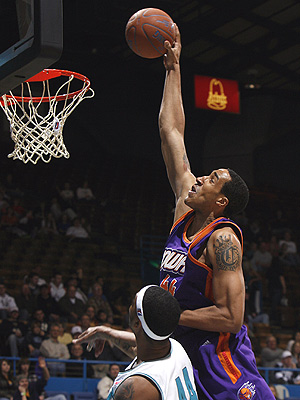 The Hawks will have four "prominent" free agents attending their team camp and fighting for a roster spot. Mario West is the most familiar 13th man in the country. Othello Hunter is a known commodity (or at least we know he looks good in a suit on the sidelines), and Garret Siler is a local product from Augusta St. But who is the fourth? Who is Courtney Sims? Just last years 6'11'' D-league MVP who averaged 23 points, 11 rebounds, and 2 blocks. Being a Hawks fan (and the fact that we do not really have a team in it), I am woefully and shamefully inept at talking about the D-league. So I scoured the brain of Scott from Ridiculous Upside. A man who has forgotten more about the D-league than I know about life. And we talked Moore, the benefits of the D-league, and the Hawks recent abhorrence in using it.

PH: Courtney Sims has put up incredible numbers in the D-league. Why do you think he has yet to stick with a team?

RU: The biggest knock on Sims is that he's not bulky enough to play the 5 - too lanky. He is reasonably athletic and a legit 6'11" so playing center is definitely something he can handle in the NBA, but that's been the biggest knock. The other problem is that he really hasn't seen the right opportunities. His rookie season, he was picked up out of Michigan as an undrafted free agent by Indiana, but was stuck behind Jermaine O'Neal, Jeff Foster, Troy Murphy, Ike Diogu, David Harrison and Shawne Williams. Not a great bunch, but enough to put an undrafted rookie out on the streets by January after 3 games played. From there, it was the D-League, in which he didn't dominate. After a Summer League with New Orleans (they've been rumored to love him, but never call him up), he came back and dominated the D-League. He was called up to the Suns, but they didn't really need him other than to appease the league and have 13 guys on their roster. At the end of the D-League season, the Knicks had him in for two 10-days, but once again he was just a warm, injury-free body.

In short, I guess I'd say he hasn't stuck yet simply because the teams that have given him a call-up haven't really given him an opportunity.

PH: Does the d-league style of play differ from the NBA?

RU: It's a different, faster game actually, but not so different that stats don't correlate, at least to some extension. One of the RU writers looked at this in-depth actually (http://www.ridiculousupside.com/2009/6/10/904563/scrubs-not-so-fast-the-production -- feel free to scroll down to the bigs segment). Pops Mensah-Bonsu and Lou Amundson are probably two of the players that were able to get a call-up and had a chance to contribute and both fill their roles well in the NBA. Other than that, it doesn't differ as much as people are sometimes led to believe. Though all players are looking to be noticed, it's been shown that players on winning D-League teams get better opportunities in Summer League, Europe and the NBA, oddly enough.

Courtney's team in Iowa was pretty good so his numbers aren't an abberation - around him he had former/current NBAer's Cartier Martin, Demetris Nichols, JamesOn Curry, Denham Brown, Anthony Tolliver, John Edwards and Alando Tucker at various points of the season. Not the biggest of names, but it shows that he wasn't a one man show, either.

PH: If Sims made the Hawks, he would be the fourth big behind (Horford, Zaza, and Joe Smith). With guys like him and Othello Hunter last year, do you think it is better for them and/or the team in the long run to play more minutes in the D-league or to practice and experience the NBA while on the bench?

RU: I'm the biggest D-League homer in the blogging world, so I'd obviously say that it's definitely better to develop in the D-League rather than sit on an NBA bench. That said, I'm going to try backing this up.

Four years ago, I might've said differently, but the D-League is becoming a lot more talented than it used to be. Last season when Hunter was in the D-League (all 3 games), he didn't exactly dominate - shooting 1-for-9 in one game. In his case, I'd say playing against talented players (Richard Hendrix, Lance Allred, Dwayne Jones, Pops Mensha-Bonsu, Courtney Sims and Rod Benson namely) rather than sitting on the bench may have helped him out. He didn't really look ready in the playoffs and whether that was due to being a bit rusty or not, I don't know, but had he played in 30 games during the season in the D-League, I think it would have helped. Worse case scenario is he's better than everyone else, doesn't improve, but at least gains some confidence. Best case is that he's playing nightly, being the focus of the coach (perhaps individually as NBA teams can send assistants with players on assignment), and getting better by playing against near-equal competition.

PH: What part of Sims' game will translate easily to the NBA? Can his game adjust/work playing less than ten minutes a game?

RU: Typically, I think high-energy bigs translate best numbers-wise to the NBA (the Lou Amundson/Pops Mensah-Bonsu mold). Courtney's obviously not going to average his 23 points, 11 boards and 2 blocks that he did in the D-League as the fourth big playing 10ish minutes a night. He's very fundamentally sound though, and because of that, I don't think there will be much of a drop, actually. He probably won't wow the Hawks fanbase in 10 minutes, but fans won't be upset that he's in their either. He'll come in, hit the boards, maybe swat a shot, and if needed, he has a pretty right handed jump hook he can use at will.

PH: Where must Sims' improve?

RU: As I said, fundamentally, he's pretty skilled. He's a little slower than you'd like and he could bulk up, but his skillset has probably reached it's potential, save for adding some range to a limited jump shot (probably good out to about 10-12 feet).

If he gets a legit shot at making the team, he'll probably stick, as the downside is at a minimum. I'm a big Garrett Siler fan though, so I know he has some competition!

I feel like a better person after this interview. Thanks Scott for some great info. Personally, I hope the Hawks start taking advantage of the D-league more. And I have to agree that if Othello Hunter was in anyway useful in the playoffs (whether it was because of injury, big leads, or a real role), it seems he would have been more prepared averaging big minutes at some point during the season in the D-league.

Even with only a couple roster spots left, I can actually say I am pretty excited to see how this thing shakes out. And if a few of our boys find their way back to the D-league, head over to Ridiculous Upside. They got you so covered you will feel like you are there.