72 reasons to be excited about the Atlanta Hawks: #45 Hawks service in the city

Share All sharing options for: 72 reasons to be excited about the Atlanta Hawks: #45 Hawks service in the city

Hawks players are a rare breed. They are mostly 20 something millionaires who have risen from middle or lower class upbringing to be world class athletes. It is not as if this fact requires them to give back to Atlanta or anywhere else. There place in life doesn't require it anymore than it requires me to do something with the extra time and cash I have at the end of the month. Yet the Hawks do do it. Some of it is part of an organizational commitment, but some of it is not, and you cannot deny the impact a Hawks player has when he sincerely gives his time and money to the community. It is a big deal, and it should be a big deal.

Al Horford just gave 5,000 dollars to this non-profit that assists Latino families in Atlanta afflicted by domestic abuse. Joe Johnson did a "Santa-lanta for kids" (Best. Nam.e Ever.) at Boys and Girls club in the city. Almost every player has a cause. It is about helping the city, being a real part of the city. More and more the organization is creating events for fans to interact with players. The team has come out to Edgewood shopping center and signed autographs. I literally bought a Five Guys burger from Flip Murray.

The Hawks do not owe it to the city to give back. But when they do, it is a powerful testament. In the NBA, you have about 15 guys on a roster. You feel like you know them. It is different than any other team sport. Mario West reading at an elementary is still a big deal. Shoot, Harry the Hawk came to my wife's school and it was a huge thing. Real impact can be made. The more the players get out there then the more the team becomes a part of the city. It really is a win, win for everyone involved. And it really is something to be excited about.

Of course, if the Hawks are looking to find a way and support me. I kindly request Bob Rathbun reading me Dr. Seuss. 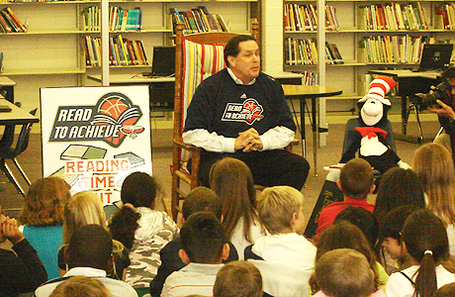 (HT again to Bronn for the idea and the link to Joe's awesomely named "Santa-lanta.")