Is Josh Smith not shooting three pointers good or bad?

Share All sharing options for: Is Josh Smith not shooting three pointers good or bad? 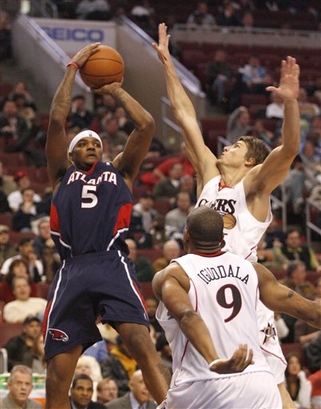 I also worked on my handles and knocking down that mid-range jumper. I’m really not worried about the 3-point ball right now. We have so many guys on this team that can make that shot. Josh Smith in the AJC.

Josh Smith is an enigma. He blew away his career high shooting percentage last year at 49% and is the most ridiculed player (in my house at least) on the team for shot selection. Who says talent isn't a burden?

Still, few people are going to argue this fact. The less jump shots Josh Smith takes the better. But for a guy who shoots almost the same percentage from beyond the arc as he does from 16 feet, is giving up threes really that big of a deal? It is this tension between the abstract idea and the repercussions of it implemented that makes this seemingly good news a bit convoluted. The Inspector shot over three times more two pointers than he did three pointers (306 to 82). That is a lot more damage from inside the arc than out. And those 26 three pointer he made is like making 39 two pointers. 39 out of 87 is forty-four percent. That is a bit of fuzzy math, but the point remains. Mathematically speaking, any Hawks fans should want Josh to shoot three pointers more than two point jump shots, and now, he is only going to shoot more two point shots.

And yet, since the end goal is for Josh Smith to shoot no jump shots, is a reduction of them really a bad thing? Another example at least for some context. Memphis hopes Zach Randolph passes more. Zach Randolph is not a good passer. Do they actually want him to pass if he is the best option for scoring and he is not good at passing? Tough call.Yes, these plays are horrendous, but the guy can fill it up.

In some sense, you have to move beyond a single stat in these situations. Maybe even beyond stats and play a little choose your own adventure. What are the options? Where would you rather Josh be if he never improves his shooting but is going to shoot? Josh Smith catching the ball at the three point line leaves him in position for the highest reward on a bad shot. It also is the position he can least likely successfully drive to the basket. Defenders are going to leave him more open because of the spacial ability to do so and the overall mantra of other teams that says "any Josh Smith jump shot is a good jump shot for us." Smith can less easily drive by a player and feel more encouraged to shoot when he is beyond the three point line. A two point jump shot more often sees a serious challenge from the defender even if a Josh Smith jump shot is what the defense wants. It is instinct. It is the accessibility. It is the defender having nothing better to do. I can remember at least ten times, despite all basketball wisdom against it, when Josh Smith got a defender in the air and drove the ball. I believe players are shot if this happens on a Smith three point attempt (Solomon Jones home opener here we come!).

Josh Smith can also be a factor on the offensive boards from the two point jump shooting position. That is a bit like saying Marvin Williams could average 25 points if he got to the line 12 times a game since neither player has shown a desire to do so despite the apparent ability to make it happen, but the opportunity at least exists. It is not only tough logistically from the three point line to do so, but it is not even the best strategy because of the ability for the other team to get run out baskets.

Then again, I cannot remember one big two point jump shot Josh Smith has hit in his life. Sadly, there were three or four Smith three pointers that mattered just last season. He actually helps the team with an occasional make. Yet, I think in part that is because Josh knows how dumb a two point jump shot looks in those situations. End of games are about statements and I dare call upon Dominique and say, about daggers. Josh Smith has never made a statement with a two point jumper. A wide open three with a minute left is a bad shot, but not a dumb shot. Under five seconds on the shot clock, you almost have to take it. If Josh Smith gets the ball 16 feet from the basket with the game in doubt, he is going to drive the ball. I say that only because I cannot remember him ever actually shooting it. In crunch time, that shot is just not in the feel of the game. Weird, unprovable, but true.

In the end, it is odd to think that Josh Smith not shooting threes could actually hurt the Hawks, but it could. Is this a classic case of wishing something to be true only to regret it when it happens? Or will this make Josh Smith and the Hawks better? I know two things. If he simply shoots 83 more two point jumpers, we are in for a long season. But at least he no longer feels bound to shoot the long ball, you know, for the kids.