72 reasons to be excited about the Atlanta Hawks: #50 the Sprite Jam Cam

Share All sharing options for: 72 reasons to be excited about the Atlanta Hawks: #50 the Sprite Jam Cam 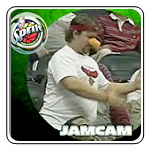 Continuing our theme week in the series, of things inside Phillips to get excited about, I had to pull up this entry from way back in Nov. 2007. Enjoy.

At some point during nearly every Hawks game, the Sprite jam cam comes on the jumbotron and finds people in the crowd to participate in a dance competition. This is the second best gimmick Phillips Arena has outside the kiss cam. Usually being able to claim such a spot simply by watching people go from normal dancing into unnaturally fast maneuvers as soon as they see themselves on screen. And Sunday was no exception.

Around the third or fourth person, the jumbotron settled on a woman holding a four year old child (approximated age by the author). The child was small enough to be held but big enough to where it was awkward if you tried to do so. As far as I could tell, the woman was adjusting her son, standing up to do so, and then by coincidence, the Sprite Jam Cam spotted her and she spotted the sprite jam cam.

The woman did not miss a beat. She started busting it down. I mean dancing like she defined the word. And the more she gyrated with increasingly provocative movements the more her son began to slip from her grasp. It was like she had a bunch of groceries and was just holding on as best she could until she unlocked her door.

This woman was barely holding on until that camera left her. And when it did, the boy was practically inverted.

The camera moved on but always comes back to the best of the best. This woman had clearly never seen the Sprite jam cam because again she was unprepared. And again, she nearly sacrificed her son for victory. Finally putting him down so she could, in the best example I have ever seen, drop it like it was hot.

Here is the conversation that followed,

PA Announcer: Get that boy a seatbelt.

My friend: That was seriously worth the price of admission.

The Sprite Jam Cam everybody, get excited!