Believing in your product

Share All sharing options for: Believing in your product 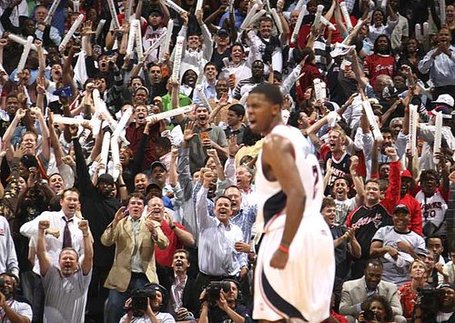 via alt.coxnewsweb.com
By now many of you have seen this article from the New York Times or from another source about the New Jersey Nets new promotion. It involves a ten game package of the Nets playing the best/most popular teams and includes a reversible jersey with a Nets player on one side and a Wade, LeBron, Kobe, etc, on the other.

For the Bostons, Lakers, even Blazers of the world the promotion is certainly mocked from on high. It is less looked at with disdain and more ridiculed for having to go to such measures to fill the seats.

But not every team has championships in the teens or a monopoloy on a city's sports market or a LeBron James in town for every home game. You can call New Jersey a bad sports town, but the NBA is a pretty fair weather sport no matter what city you are in. Mike Bibby was telling the truth Boston.

And this promotion would probably work really well for the Hawks. Atlanta is a transplant city. If you have ever been to a Pistons or Knicks game at Phillips, it quite evident that many of the NBA fans in the city have allegiances to other teams. And people show up to see LeBron and Kobe Bryant. They want to see the best. And to stretch this analogy slightly, no one mocks the High museum for advertising or those those who went to see Monet's Water Lilies exhibit and skipped out on the art from Georgia permanent exhibit. Without a connection, your drawn to the best. Plain and simple. Can you blame the Nets for trying to capitalize on that phenomenon?

But that is the rub. I want the Hawks to sell out every game. And if the management could get thousands of more fans into Phillips, I would say do the promotion. Make the Hawks ticket harder to come by, more desirable. Having four Pistons fans around a half hearted Hawks fans will turn him into a die hard fan after two beers and four "DE-TROIT BA-SKET-BALL" chants. Now that a decent product is on the court, the only thing missing from Phillips is atmosphere. And I know that because I have been there when the atmosphere is there, and its electric.

So I am not going to lampoon or snub my nose at the Nets and their reversible jersey. I see what they are doing. But a promotion like this is not where the Hawks should go. Not if you think Atlanta can be an NBA town.

It is about trusting in your product. I am under the firm belief that if a sports fan goes to five Hawks games he will at a minimum follow the team from afar. The NBA is a really, really good product. But for so long in this city, the Hawks were synonymous with bad that people don't even check in and see if that is still the case. I still get "Ha, your a Hawks fan? Why?" reaction. And I just say, "You know they are pretty good now right?"

They don't know. And that is the point. Selling season ticket bundles of star studded teams and hyping two games against Boston every year is simply the wrong approach. It says our product alone is not good enough. And yea the draw of a superstar might get a few more people in the seats but it is not going to get many more fans. Because really, what have they been given to buy into? Hyping ten games against great teams is going to the circus and the whole draw of the circus is that you don't have to take the elephants home with you.

If you believe, with enough exposure, people will connect to your product then you have to have them in the mind frame that buying in an option. You have to sell your product. I look at the Falcons a few years ago and how they have transformed from disastrous to buzzed about in the city. It is asking the question in all seriousness, "how do we take over this city?" And reversible jerseys of another team is not the answer. Here are a few that might be though.

1. Lower ticket prices in the upper bowl. If the lifelines of any owner are the luxury boxes and high dollar seats, families and large groups of young singles are the lifeline of any fan base in my opinion. Making the Hawks an attractive Friday night outing or a random Tuesday night out hinges on affordability. I look back at the Falcons cutting season ticket cost and the success in that. It was Arthur Blank saying we will earn your money for next season with this season.

2. Offer a variety of season ticket plans. Weekend packages, Wednesday night games, but always sell the packages as Hawks games. I loved last year's annoying Falcons radio ads. We want loud fans. We don't want fans. We don't want other teams fans. We are creating a fan experience. You should be a part of it.

3. Announce the vision. Are the Hawks good with the fourth seed? Are they fine just making the playoffs? As much as I have loved what Rick Sund has done in Atlanta, his quotes have been things like "this team is not a championship yet" and "we like what we did last year and we think we are moving in the right direction." What direction is that? Where is the destination? Because the history of the Hawks does not allow many people to make the jump from "right direction" to "championship run" unless they are told the management has made that jump. If the Hawks want buy in, they need expectations which means being willing to fall short of them. Look at the Braves. For the past three or so years, no expectations and with it, much less passion. You cannot expect casual fans to follow, attend, and watch games with "I hope we get the wild card this year" approach.

4. Market the Hawks as Atlanta's team, not as something to be entertained by. The best things out of the in game people at Phillips have been the videos of "us against the world" and making fun of other cities and the Rocky/Zaza clips. "Now you know" is a fine and dandy tag line but needless to say it insinuates that no one knew before. Build excitement by demanding it. Knowing a team doesn't suck anymore is not going to get them in the seats, feeling like they are missing out on something is. So build that collective us verse them, that something big is happening here aura that makes actually being a fan so great.

I love the Hawks. It is time for the Atlanta Spirit to act like they have something to love. Atlanta can be an NBA town. Believe in your product and get out there and sell our team to the city!