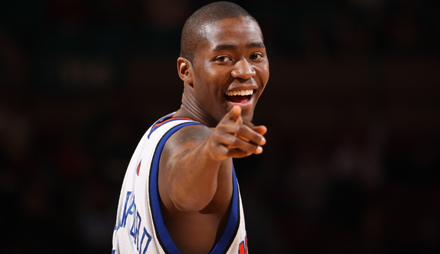 Oh what a ride! We have crisscrossed this fine nation looking, hoping, wanting a little knowledge on our newest sixth man Jamal Crawford. We ventured over to Golden to State and got the fan reaction. We came back east and delved into a Q&A with Posting and Toasting, and we ended with a fine mid-western mini-essay by Blogabull looking at the beginning of what has become the Jamal Crawford mystique.

But it is time to head back south. What does it all mean for the Atlanta Hawks? Well, if I have learned anything from our Crawford journey, it is that you cannot sum the man up in a sentence. Fans love him, but they hate him. They point to fifty point scorring barrages as a negative. He is a guy that if you free yourself to love, he returns the favor. Just not always by winning. Can you be an enigma without an up and down attitude? We will find out with Crawford.

Where to place our hope

Crawford can score from anywhere at anytime. He can give us "Hot Flip." With a second unit of Jeff Teague, Jamal Crawford, Mo Evans, Joe Smith, and Zaza Pachulia or some mixture of them with a starter or two, sometimes a Crawford 20 footer might actually be the best shot (better than a stop and pop from Mo Evans at least).

The 6th man redemption. Coming off the bench changes perceptions, Crawford's role will be to provide the spark. Coming off the bench allows Woodson to play matchups. Stick Crawford at the point against smaller defenders, put him in during certain advantageous situations. I think I have mentioned once or twice on this blog my feelings about Mike Woodson, but he managed Flip Murray pretty well last year. Maybe most importantly is this, Flip Murray shot 34% in the playoffs. That is worst of the worst cases with Crawford. And how many people blamed Flip Murray for any of the losses (or gave credit to him for the wins for that matter)? The point is, from a wins and lose perspective, Crawford can much more easily positively effect the team than he can negatively from game to game.

He can handle the ball and shoot free throws. If you watched more than five games last year, you understand how great this is going to be at the end of the game. On the team now, I don't really trust anyone to both handle and make the free throw in crunch time. If the Hawks win fifty games, Jamal Crawford might average 12 points a game from the charity stripe.

At least one game, Crawford is going to to buck nutty on offense.

Where to nurture the freak out that has already started.

No one had a bad thing to say about Crawford off the court. He was a solid locker room guy, always a class act in the community. Which goes to show you how frustrating he can be on the court. Nice guys are rarely hated, but certain fans from every stop on the Jamal Crawford tour hate Crawford on the court. That is impressively scary.

Yes, his defense is apparently that bad.

Ok a little perspective, Crawford is a horrible rebounder (74 out of 75 shooting guards in the league in rebounding rate). No one even talks about it, his defense is that bad.

Picture in your mind how much Crawford could actually shoot in a game, then add five shots. That is how much he shoots. He likes to shoot.....a lot.

Crawford has/had the ability to be at least decent on defense. This is not a Mike Bibby situation that mixes lack of effort and lack of athleticism. At this point in his career, Crawford is not going to be a good defender, probably not even an average defender, but can Mike Woodson and a team that actually can/should make the playoffs, push Crawford's effort up to not be a horrible defender? If it does not happen, the Bibby/Crawford is going to get ugly. Against the Spurs, it might get down right tragic.

The biggest thing might be that Crawford has all-star talent. For teams not making the playoffs, the wasted aspects of Jamal's game (bad shot selection, poor defensive effort, etc.) are going to be exponentially frustrating. If only Crawford did this, if only that, think what kind of team we could be. Think Josh Smith. Well, the Hawks neither signed Crawford nor need him to live up to that past potential. And for that, it will be much easier to enjoy the fruits of his enigmatic game. Josh Smith on the other hand....

Final thoughts on the half week

Thanks again to Golden State of Mind, Posting and Toasting, and Blogabull for stepping up and writing about our good buddy Jamal. As a bit of an optimist, I have to admit a good deal of excitement about Crawford, especially with his ability to finish games. But as a person who cares a little too much about a regular season game against Charlotte in January, I have begun a daily regiment to comprehend how bad the negatives really are. Because apparently they are bad.

And with that we end, Jamal Crawford half-week. Now, to the team gear store to buy our Crawford jersey.....